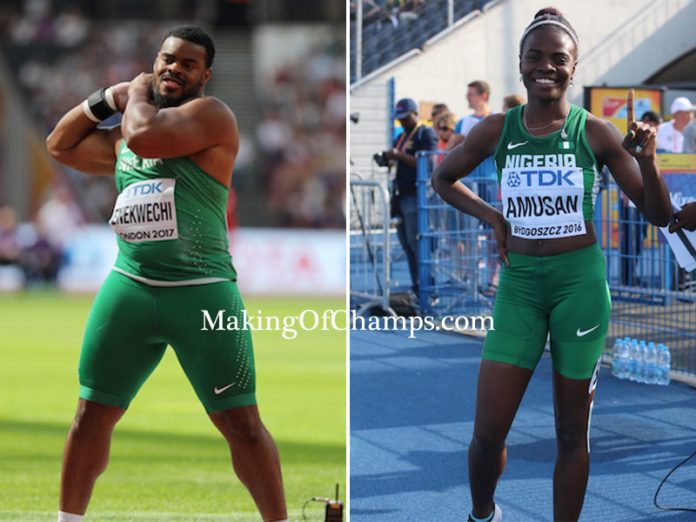 It was a good day at the office for Team Nigeria as the host country won four medals (2 GOLD, 1 Silver and 1 Bronze) on Day 2 of the 2018 African Championships taking place in Asaba, Nigeria.

Nigeria’s first medal came in the women’s 100m Hurdles when Tobi Amusan struck GOLD in the final of the event, clocking a time of 12.86s to claim victory.

The 2018 Commonwealth Games GOLD medallist hardly broke a sweat on her way to victory, pulling clear of the chasing park after the third hurdle to add the medal to her burgeoning accolades for Nigeria. Grace Ayemoba narrowly missed a podium placement in 4th while Efe Favour placed 6th in the same race.

In a similar vein, Chukwuebuka Enekwechi was in a class of his own in the men’s Shot Put, winning the final with a best throw of 21.08m.

The medal is the second Enekwechi will be winning for Nigeria as he had won Silver in the same event at the 2018 Commonwealth Games. Kalu Eke narrowly missed out on a medal as he placed 4th with a mark of 18.79m.

Temilola Ogunrinde was the only Silver medallist on the day for Nigeria. The Hammer thrower fed on the numerous applause from the crowd as she threw a mark of 67.39m to place 2nd behind Soukaina Zakour of Mauritius. The mark was also a new National Record (NR).

Former NR holder in the event, Queen Obisesan, placed 5th with a mark of 63.02m.

Joy Udo-Gabriel added a Bronze medal to Nigeria’s medal tally as she crossed the finish line in 11.58s to place 3rd in the women’s 100m final. Nigeria’s other sprinter on the track, Mercy Ntia-Obong clocked a time of 11.69s to place 5th as Ivory Coast’s Marie Jose Ta Lou won the race in 11.15s.

In the men’s 100m, Nigeria’s only athlete in the final, Seye Ogunlewe gave his best effort but it wasn’t enough as he settled for 5th place in a time of 10.45s. The duo of Enoch Adegoke and Ogho-Oghene Egwero had earlier in the day run in the semis, but didn’t scale through to the final.

Furthermore, the quartermile duo of Yinka Ajayi and Patience Okon-George qualified for the finals of the women’s 400m. Ajayi clocked a time of 51.43s to win the third semis, while Okon-George finished 2nd behind South Africa’s Caster Semenya in 52.81s.

Chidi Okezie ran a fantastic home straight in one of the men’s 400m semis, coming from behind to win in a time of 46.05s. Additionally Orukpe Erayokan qualified for the final, clocking a time of 46.51s to place 2nd his semis. However, Samson Nathaniel didn’t make it into the final.

Rilwan Alowonle had a bad day in the office as the hurdler placed 6th in Heat 1 of the men’s 400m Hurdles. Nigeria’s other hurdler, Henry Okorie also didn’t make it into the final.

NR holder Edose Ibadin was the only athlete to compete in the men’s 800 heats. The middle-distance runner placed 3rd in his heat to qualify for the final.

Nigeria’s quartet of Ogho-Oghene Egwero, Divine Oduduru, Emmanuel Arowolo and Usheoritse Itsekiri narrowly lost out to Team South Africa in Heat 2 of the men’s 4x100m. The team however qualified for the final.

Finally in the Long Jump, National Under-20 Champion Benjamin Arinze finished outside the medal zone, registering a mark of 7.41m.