The women’s One Mile provided an enthralling finish to the London Diamond League on Sunday, as the Netherlands’ Sifan Hassan outclassed her rivals to set a World Lead (WL) Personal Best (PB), National Record (NR), Meeting Record (MR) and Diamond League Record (DLR) of 4:14.71 on the day.

Apparently, the best was saved for last as Hassan was absolutely outstanding and in a class of her own. The London 2017 Bronze medallist in the 5000m distinguished herself from her rivals as the bell went off, racing to the third fastest time in history.

The 23-year old was unstoppable, racing to a PB, WL and MR of 1:42.05 to become the sixth fastest man in history. So fast was the race that the first nine finishers either clocked a PB or SB in the process. Clayton Murphy was 2nd in a Season’s Best (SB) of 1:43.12 and Wyclife Kinyamal 3rd with the same time – a PB for the Kenyan. Nijel Amos finished 4th with an SB of 1:43.29.

USA’s pair of Kendra Harrison and Brianna McNeal rekindled their rivalry in the 100m Hurdles, but it was the World Record (WR) holder that took the day with her WL of 12.36s at the same stadium where she set the WR two years ago. McNeal came through in 2nd (12.47s) as Sharika Nelvis followed in 12.51s. Nigeria’s Tobi Amusan placed 7th with an SB of 12.68s.

It was a big win for USA’s Jenna Prandini in the women’s 200m as she defeated an A-list field comprising of London 2017 Silver medallist Marie Josee Ta Lou, World Champion Dafne Schippers, and Jamaica’s Shericka Jackson. 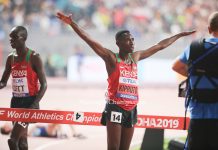 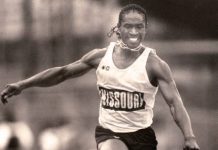 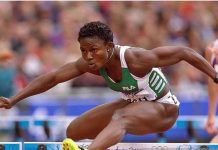 This Day in History: Alozie races to Nigerian/African Record in the 100m Hurdles