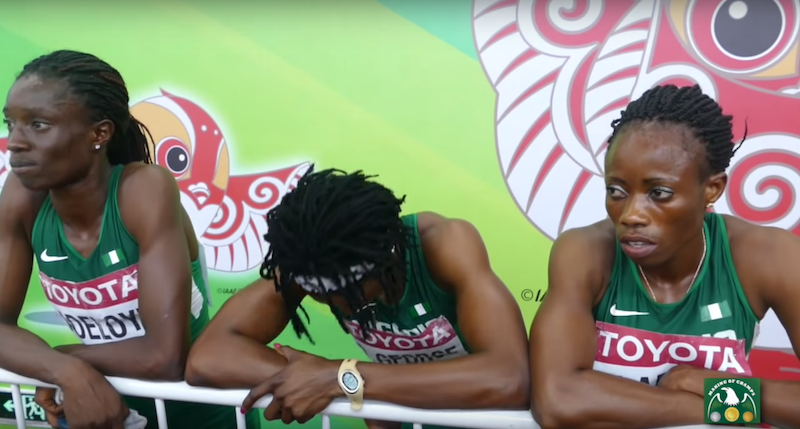 Unfortunately it was yet another World Championships to forget for Team Nigeria, as the nation went home without a single medal for the 7th time in 8 World Championships since 1999. Only Blessing Okagbare’s double feat of Long Jump Silver and 200m Bronze in 2013 has saved Nigeria the embarrassment of being medal-less since the turn of the century.

This competition emphasised why no country can or should rely on a single athlete as their strategy for winning global medals. Undoubtedly Blessing Okagbare is Nigeria’s best athlete of the last decade, but it was also a Championship to forget for the 100m African Record Holder – after finishing 8th in the 100m, she pulled out of the 200m with a reported hamstring injury and did not enter the Long Jump this time around.

A key area of vast improvement affecting Team Nigeria’s hopes on the global stage is that of planning and logistics. It turns out that Nigeria’s best medal hope at these Championships turned out to be one of the last events on the final night – the women’s 4x400m. The quartet of Regina George, Funke Oladoye, Tosin Adeloye and Patience Okon George had performed valiantly winning their Semi-final the day before ahead of the Jamaicans with a time of 3:23.26.

The final was a different story – as expected the Jamaicans were able to bring in two runners they rested from the Heats, individual 400m finalists Stephanie-Ann McPherson and Novlene Williams-Mills. USA did the same, bringing in Natasha Hastings and newly crowned 400m World Champion, Allyson Felix who also did not run the Heats the day before.

Team GB brought in former Olympic and World Champion Christine Ohuruogu, and her inclusion alone on their lead off leg was enough to give Britain the kind of start they needed to remain in third place throughout the race.

Nigeria on the other hand, opted to use the same 4 girls for the Heats and the Final, and after running the race of their lives in the Heats, they stood little chance the next day against better prepared nations whose star athletes had fresh legs coming into the final.

Interestingly, while each Relay team is allowed 6 athletes, Nigeria only brought 5 to Beijing, and the fifth, Rita Ossai was an unused reserve. 6 were initially listed but Margaret Etim, who made the list initially did not make the trip to Beijing.

The team eventually finished 5th in 3:25.11 – nearly 2 seconds slower than they ran in the Heats, though they still ended up as Nigeria’s best placing in Beijing (Followed by Okagbare and Tosin Oke, who finished 8th in the 100m and Triple Jump respectively).

It turns out that Team Nigeria’s Officials did not even plan for or anticipate a medal in the final event, else the Team would not have been booked on a flight at midnight on Sunday (Aug 30), barely 3 hours after the competition wrapped up in the Bird’s nest.

If the team had won a medal, they would have needed to stay at the stadium at least another 2 hours for the medal ceremony and press conference – they certainly had no business catching a flight the same night they were representing their nation!

Instead, the 4×4 team had to be whisked away to the airport immediately after they stepped off the track. Here is a short clip of the team after the race, complaining about the lack of reserves for Team Nigeria before having to rush off to the airport:

This only adds further fuel to the flames that have been heaped on the Athletics Federation of Nigeria (AFN) this week, with Tosin Oke scathingly calling the competence of our administrators into question (and asking for money owed to him), a clearly demoralised women’s 4x100m team crying out for change in how the sport is run in Nigeria, and the tragic story of Abbas Abubakar Abbas’ switch from Nigeria to Bahrain, where he directly advised the AFN to change, to help athletes in Nigeria.

No doubt there will be a post-mortem back home in Nigeria, and perhaps calls for newly-elected President Buhari to make the right decisions regarding appointing a new Sports Minister who will have the character and ability to positively impact Nigerian Sports and put the nation back on the international sporting map, and not just in football. Athletics is one of several sports that Nigeria could easily dominate on the global stage (Boxing, Weightlifting and Wrestling are some others), with just a little effort and long-term planning!