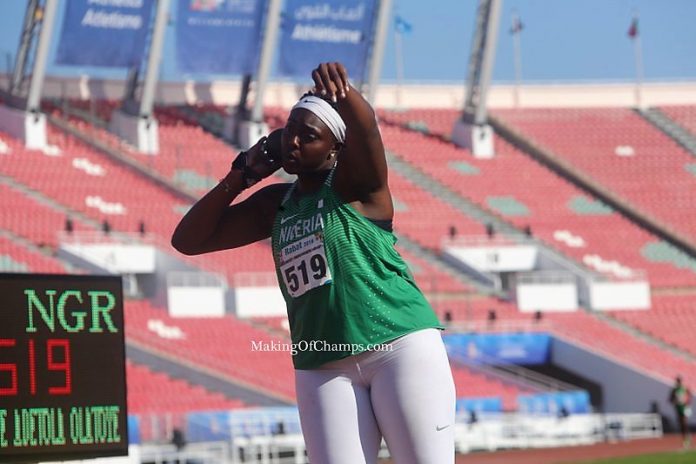 Team Nigeria ended Day 15 of the ongoing African Games on a flurry as it’s medal haul increased to 126 (46 GOLD, 33 Silver and 47 Bronze) at the end of proceedings.

The athletics event of the games got to its climax with Nigeria notching up six medals to add to it’s trove.

Sade Olatoye was the country’s only individual GOLD medalist on the day in athletics as she emerged victorious in the women’s Shot Put. She put together a good series of throws, all beyond 16m-except for the 5th round, but it was her first-round attempt of 16.61m that did the magic. It was Olatoye’s second medal of the Games, having won Bronze in the Hammer Throw.

In men’s Javelin, Nnamdi Chinecherem won Bronze, throwing a distance of 73.24m. It was his first senior medal, having won GOLD at the African Junior champs in April.

On the track, Divine Oduduru’s wait for a first African Games crown continues as the sprinter once again finished 2nd with a 20.54s clocking in the men’s 200m final. Nigeria’s other representative Ogho-Oghene Egwero was 6th in 21.00s. Zambia’s Sidney Siame won the race with 20.34s.

Nigeria’s only athlete listed to run in the women’s 200m Final Rosemary Chukwuma Did Not Start her race.

In the women’s 400m Hurdles, Abasiono Akpan rallied her way back into contention as she was able to claim Bronze for her efforts. She clocked 57.66s.

Nnamdi Chinecherem won Bronze in men’s Javelin, throwing a distance of 73.24m. It is his first senior medal, having won GOLD at the African Junior champs in April.

Nigeria women’s 4x400m team defended the crown they won four years ago in Brazzaville when the quartet of Patience Okon-Geroge, Blessing Oladoye, Kemi Francis and Favour Ofili combined to scorch to a time of 3:30.32.

For the men, they weren’t able to reel in the South Africans on the final lap as they settled for Bronze in 3:03.42.

Ayomide Bello was in a class of her own in the C1 200m Women Final of Canoeing. She returned a time of 50.517s to win the event. She also teamed up with her compatriot Foloki to win the doubles in the event.

Nigeria’s wait for a first GOLD medal since 1973 in the football event continues as the Flying Eagles, who represented the country, lost to Burkina Faso 2-0 in the final.