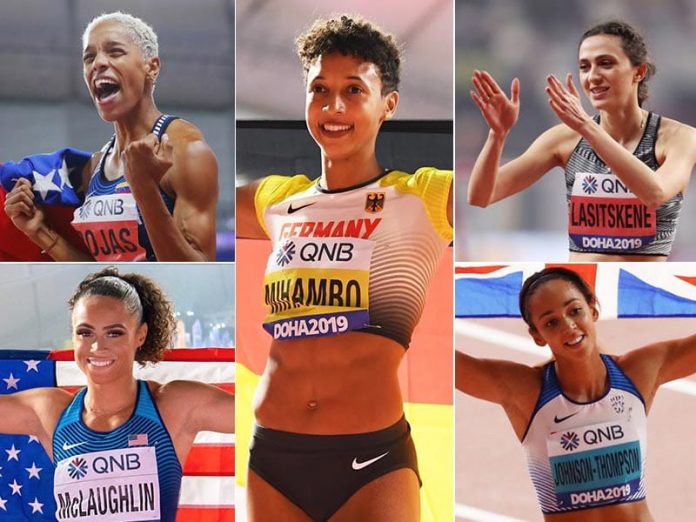 The game of Track and Field isn’t exactly a game for contests between the sexes but realistically speaking, women have done incredibly well over the years and 2019 wasn’t any different. Returning mothers won meets on the circuit and even World titles, and a few World Records (WR) were set across a variety of events.

Carefully, we have gone through all the Top Female Athletes in the World and their performances before arriving at a list of 10.

Just when Katarina Johnson-Thompson was being tagged the next big thing in the Heptathlon, she suffered a few disasters on the global stage, first of such being at the 2015 World Championships in Beijing where the Briton failed to register a legal attempt in the women’s Long Jump, moving her out of medal contention.

Two years later on her home front in London, she would have hoped for a better placement coming to the last event of the competition, but she needed a 17-second swing on the rest of the field to move up to Bronze medal position, which was a tall order, and so she settled for 5th place overall.

The narrative changed in Doha – she was out in cracking form when she sped to a Personal Best (PB) in the 100m Hurdles, timed 13.09s to beat her arch rival, Nafi Thiam who was the defending World Champion. They both cleared an equal Championships Best of 1.95m in the High Jump so that KJT maintained a 40-point lead on the Belgian athlete.

Though Thiam made sure her presence was felt in the Shot Put, winning the event with a 15.22m heave, KJT was pleased with her performance when she spun out a PB of 13.86m in the final round, helping her keep Thiam in sight as the Olympic Champion now led by 51 points

Thiam went first in the women’s 200m, the last event of the first day where she clocked 24.60 while Johnson-Thompson produced the fastest time on the track, clocking 23.08s to bring her first day tally to 4138pts, the third best ever Day 1 result.

She had accrued an impressive 96 point lead after the first day and she kept on widening her chances when she leapt 6.77m to again top the Long Jump standings, while her lead was now by a huge 216 points. Thiam had her throwing elbow strapped for the women’s Javelin where she threw 48.40m while KJT once again assured herself of the GOLD medal round her neck with a new PB of 43.93m.

She was putting together her best ever series in one competition, and clearly being a better 800m runner than most of her other competitors, it now became a question of whether she could break Jessica Ennis-Hill’s National Record (NR) of 6955 points.

Buoyed by  the roars of track enthusiasts and fans in the Khalifa International Stadium, Katarina Johnson-Thompson made history, producing her 4th PB of the contest by 0.37s as she clocked a time of 2:07.27 to win the women’s 800m, one that saw her break Ennis-Hill’s British Record as she amassed a total of 6981 points before the wave of emotions kicked in.

She had beaten Thiam by a gutsy 304 points, the largest winning margin at the World Championships in 32 years while she also moving up to 6th on the all-time Heptathlon list.

The young and vibrant Sydney McLaughlin in three years has been able to demonstrate how to transit from a brilliant U-20 career to the senior cadre. Suffice to say, she competed mostly with seniors even through her years as a junior.

Her outdoor season kicked off at the Oxy Invitational in Los Angeles where she was easily on top of the contest with a 54.14s clocking to show. She then finished 2nd behind Salwa Eid Naser in the 400m at the Shanghai Diamond League (DL), running a Season’s Best (SB) of 50.78s.

She won three meets in succession after that race; the Oslo DL, the Meeting de Marseille Pro Athle Tour and the Monaco DL where she set an SB of 53.32s prior to the 2019 USATF Championships. McLaughlin easily topped her qualifying round of the women’s 400m Hurdles in 54.24s, and then locked horns with Dalilah Muhammad, the reigning Olympic Champion in the final of the event in Des Moines.

On a wet track, Muhammad laid down the gauntlet from the very start, and by the time they rounded the last curve, it was evident that the older athlete wasn’t going to relinquish the lead. She infact smashed the World Record (WR) by 0.14s while McLaughlin finished in a lifetime best 52.88s. It was to be tagged the greatest race in the history of the women’s 400m Hurdles, except for what was set to unravel at the World Championships in Qatar.

McLaughlin got her dose of victory when she beat Muhammad at the DL Final in Zurich, improving her SB and Personal Best (PB) with a 52.85s clocking in her last race before the Worlds.

McLaughlin looked so smooth in the qualifiers of the women’s 400m Hurdles as after she clocked 54.45s in the heats, she executed in the third semifinal, looking even stronger with a time of 53.81s to show.

When the gun went off in the final, Dalilah was out very fast again while Sydney kept close tabs as they both eased down the backstraight with a lead of about three strides on the latter. Onto the last 100m, McLaughlin really began to make a move, thinning away the lead of Muhammad who had years of experience to hold on to.

The lead duo were quite a scene to watch and as it turned out, they produced the greatest race in the history of the event at the World Championships – Muhammad smashed her WR for the win while McLaughlin went better again, producing the second fastest time in history as she clocked 52.23s to crown a very befitting season.

She is a very business-like athlete but if it helps get the job done, then why not stick to her style?

That is the case of Authorised Neutral Athlete, Mariya Lasitskene who arguably, has been the most dominant figure in the women’s High Jump since 2015 when she won her first World title.

The highlight of her indoor season was winning the European Indoor Championships in Glasgow with a 2.01m clearance before going on to win all the Diamond League (DL) meets she was entered for, including the final in Brussels.

She had a hitch in The Match between Europe and USA in Minsk, Belarus, where her best height of 1.98m could only get her 3rd position, but as the saying goes, “Everyone is a competitor in a competition”. She was headed to Doha with a World Lead (WL) of 2.06m and most importantly, the favourite tag, with a mental advantage over other competitors.

It was a game of unprecedented depth, with as much as four women scaling the 2m height at the World Athletics Championships in Doha, but the night only belonged to one woman – Lasitskene who scaled the 2.04m on her first try to successfully ward off the challenge posed by a young Yaroslava Mahuchikh who got two World Junior Records (WJR) and a Silver medal.

Mariya Lasitskene thereby became not only the first woman, but the first athlete to win three consecutive World titles in the High Jump.

You can always spot the sporty and tall figure of Yulimar Rojas, taking to the runway in a women’s Triple Jump contest. The Venezuelan who won a Silver medal at the 2016 Olympic Games, started off on a good note outdoors, but not in her usual event, the Triple Jump.

She competed at the Spanish Club Championships in the women’s Long Jump in Zaragoza where she leapt to 6.79m, which wouldn’t count as a Personal Best (PB) due to excessive wind.

Her indoor season spoke well of her abilities as she rounded off the season as the World No. 1 with a 14.92m jump at the Meeting Villa de Madrid, also in Spain. Few days after her win in the Long Jump, she sent waves of what her season would look like when she produced an astonishing 15.06m at the Meeting Iberoamericano de Atletismo in Huelva, a mark no other Triple Jump could match all season.

She finished 2nd at the Lausanne Diamond League (DL) and then won the Monaco DL afterwards. At the Pan American Games in Lima, she bounded out to a 15.11m World Lead (WL) and Personal Best (PB), therefore remaining the undisputed No. 1 in the world.

Her consistency over the 15m barrier was so good that she won her next meet, the Paris DL with 15.05m but was beaten by Jamaica’s Shanieka Ricketts in the Zurich DL Final.

About a month to the Worlds in Doha, whilst competing in the city of Andujar, Rojas produced the second farthest jump in the history of the event at the Memorial Fancisco Ramon Higueras when she broke sand at 15.41m, just 9cm short of the World Record (WR) set by Inessa Kravets in 1995.

It was a performance that brought her closer to one thing – defending her World Triple Jump title in Doha, Qatar. In Doha, she reached a huge 15.37m, well clear of 2nd-placed Ricketts to become the 2019 World Champion and successfully defend the title she won at the in London two years ago.

The jumpers seem to have very good shots on our list, and this doesn’t exclude Malaika Mihambo of Germany.

Mihambo who was born to a Tanazanian father and German mother, donning the colours of her motherland, finished 4th at the 2019 European Indoor Championships in Glasgow where she registered a best attempt of 6.83m. She sprung back to her feet outdoors when she won the Rome Diamond League (DL) with a 7.07m jump, backing it with a 7.05m leap at her next meet in Desau.

After surpassing the 7m barrier at the Muller Anniversary Games in London, she set a new Personal Best (PB) of 7.16m to win the event at the German National Championships. She extended her winning streak to the Brussels DL with 7.03m.

With all those incredible performances, it was evident that she was the toast of the women’s Long Jump already but still needed to win the World Championships in Doha.

It might have been strange seeing Mihambo down in 7th place after the second round ended. She had a best jump of 6.52m that could get her kicked out of the Top 8. At her third attempt, Mihambo blitzed down the runway, having improved athletically in that wise and as soon as the sand had settled, it was well clear that she had produced something sensational.

7.30m! Those were the figures that flashed up on the leaderboard. She shattered her lifetime best by 14cm and was elevated to 11th on the all-time list. It was also the third best jump in the history of the World Athletics Championships, a mark only Jackie Joyner-Kersee surpassed in her years as a Long Jumper at the Worlds.

Her improvement in the Long Jump could be marked even in the 100m where she dropped her PB in the sprint from 12.06s to 11.21s, a time she replicated twice – first at the Bauhaus Juniorengala in Mannheim and at the German Athletics Championships where she finished 3rd.