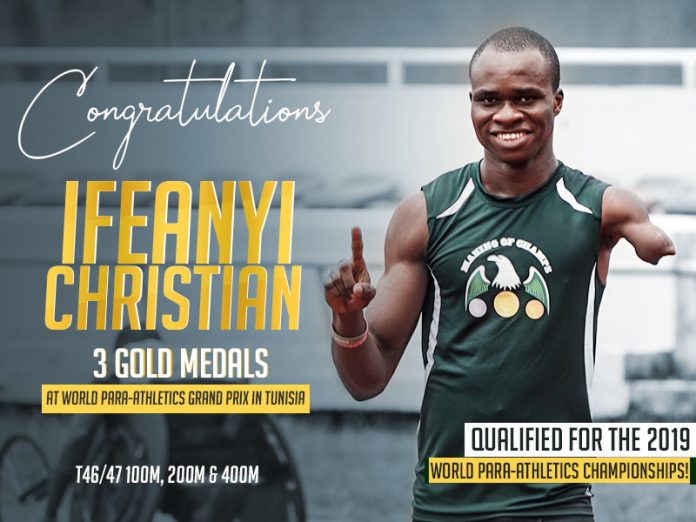 Making of Champions (MoC) Para Athlete, Ifeanyi Christian was a class apart from his counterparts while representing Nigeria for the first time ever, putting up a dominant display in the men’s 100m, 200m and 400m in the T46/47 class at the World Para Athletics Grand Prix, which held from June 28th to 30th in Tunis, Tunisia.

Christian, who is the first Para-Athlete for MoC Track Club, was part of a four-man team of athletes to the Grand Prix which had Rio 2016 Paralympic Champions, Flora Ugwunwa and Lauritta Onye (F40 Shot put) in tow, as well as sprinter Unyime Uwak. Ugwunwa holds the World Record (WR) in the women’s F54 Javelin event.

The contingent won a total of 10 medals – six GOLD, and four Silver, and Christian proved a great asset to the team as he claimed three of those GOLDs. Onye won GOLD in the Javelin and two Silver medals (Shot put and Discus), while Ugwunwa snatched GOLD and Silver respectively in the Javelin and Discus. Uwak was also not left out as she won GOLD in the 200m (T46) and Silver in the 100m.

Nigeria finished in 5th place on the medals table, with the team expected to return to Nigeria on Wednesday morning. Now ranked among the Top 10 in the Grand Prix, Team Nigeria will enjoy the advantage of more slots to the Para Athletics Grand Prix coming up in Paris in August, as well as the IPC Dubai World Championships in November, with a chance of earning more tickets to the 2020 Paralympic Games.

Christian, who is the reigning National Sports Festival (NSF) Champion in the T46 category of the 200m, won a GOLD medal on each day of the competition, starting with the 100m on Day 1 where he clocked a time of 11.04s to win his race. His time sets him as joint No. 5 in the world this year in the T46/T47 category.

On the final day of the Grand Prix, Christian once again raced to another PB of 49.56s to strike GOLD, finishing ahead of Uzbekistan’s Marufjon Murodulloev (52.12s) and Manuel Ernestro Jaime of Angola (53.32s). He now ranks 5th in the 400m in the world rankings.

President of the Nigeria Para-Athletics Federation, Hon. Amobi Chikwendu, was excited about the performance of the team in general and Christian in particular.

He said: “I am excited because we can say we got 4 over 4. We were only able to take four athletes and all four won medals and have now qualified for the Tokyo 2020 Paralympic Games. Most exciting for me is our new comer, Ifeanyichukwu Mmadubuike won 100m GOLD among other Paralympic stars in his first international outing.”

Christian’s superlative performance was underlined by how close he got to the African Record (AR) in the 400m (49.21s), which was set by Morocco’s Ayoub Sadni back in April in Marrakech. Going by his rapid improvement, the North African’s record is certainly under some threat now, and it may just be a matter of time before the Nigerian erases the continental record.

He is also looking forward to setting new ARs in the T46/47 category of the 100m and 200m as well, currently being held by another Nigerian, Adeoye Ajibola who clocked the current ARs of 10.72s and 21.83s on the same day 27 years ago, while competing at the 1992 Paralympic Games in Barcelona, Spain.

The World Championships in Dubai and the Tokyo 2020 Paralympic Games may just provide the right settings for the achievement those goals!