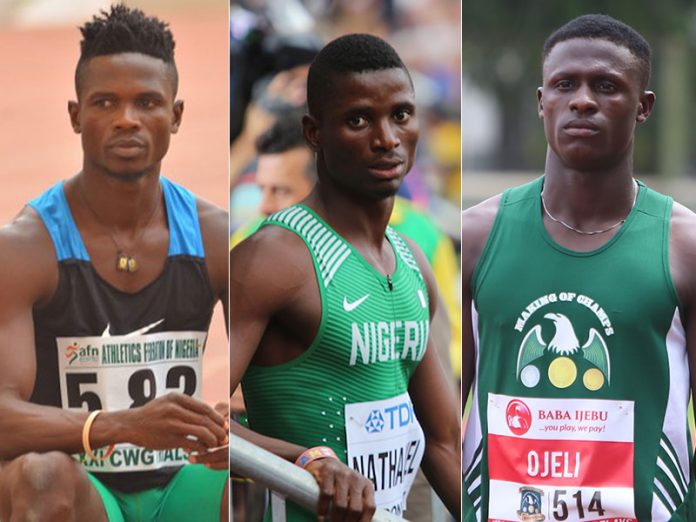 When the top quarter-milers in Nigeria battle for supremacy on the tartan track of the Sports Complex of the Yaba College of Technology at the 2nd MoC Grand Prix this weekend, a lot will be left on the the line, as not only will they be looking to hit the World Championships qualification mark in the 400m, bragging rights will also be at stake.

The match-up in the 400m pits together defending National Champion Samson Nathaniel, National Sports Festival (NSF) Champion Orukpe Erayokan and MoC Grand Prix defending champion Emmanuel Ojeli. This will be the first time the trio will be meeting since their contest at the NSF six months ago.

The field is so elite that all three athletes are only a select few home-based quartermilers of their generation who can boast of a sub-46 clocking in the course of their careers, a feat which makes this contest all the more interesting.

With a Personal Best (PB) of 44.95s, Erayokan remains the last Nigerian athlete to run below 45s, which he achieved at the last African Games in Brazzaville, Congo.

The sprinter would be hoping to use this meet as a springboard to get back to that level, having warmed up for the season with some decent 100/200m races at the last AFN All-Comers meet in Ijebu-Ode, and his fans will be eager to see him race in his signature event in Lagos.

Going into the race, Erayokan will be riding on the back of an outstanding end to the 2018 season where he got the better of Ojeli and Nathaniel at the NSF, clocking 46.32s, his best time since the summer of 2017.

Like Erayokan, Nathaniel had a sub-par 2018 season by his standards, finishing the season with a Seasons’s Best (SB) of 46.24s. However, judging by his antecedents, the quarter miler has a knack for finding his best form when it comes to championship years as one will recall that he was Nigeria’s sole representative in the men’s 400m at the 2017 IAAF World Championships in London.

He opened his 2019 season with a time of 46.96s at the AFN All-Comers meet in Ijebu Ode, and with the World Championships qualification mark set at 45.30s and the African Games standard pegged at 46.64s, Nathaniel will be hoping to qualify for both events while also claiming victory ahead of his rivals.

Defending champion, Ojeli has grown in leaps and bounds since placing 3rd at the NSF, a place where he clocked a then PB of 46.98s while representing Lagos State.

The youngster, who was one of our 5 Nigerian sprinters to watch out for this year is the fastest of the trio this year having clocked a remarkable PB of 45.91s at the Gaborone International Meet in April, which remains the fastest time posted by a Nigerian in 2019 and has earned him qualification for the forthcoming African Games.

Judging by the way he chalked off over a second from his 400m PB, one can’t bet against him getting a second victory at the Grand Prix, while also hoping to claim a qualification berth for the World Championships later this year.

Ojeli has enjoyed a fantastic run in the shorter sprints as well. Having opened his 2019 season at the Athletics Federation of Nigeria (AFN) All-Comers Meet where he clocked a PB of 10.61s in the 100m, Ojeli lowered the mark to 10.41s while racing in Potchefstroom, South Africa. An hour later, he returned to the track and raced to a new PB of 21.07s in the 200m.

One athlete who could throw the cat among the pigeons is Shedrack Akpeki. The sprinter has been able to shave off almost two seconds from his previous PB within the last year and a half, capping off his 2018 season by claiming Silver at the NSF in a PB of 46.78s. Having opened his 400m season with a 47.27s at the AFN All-Comers Meet, Akpeki went on to place 5th at the African U18/U20 Championships in Abidjan.

Abdulrahman Afeez, who was a finalist at last year’s Grand Prix and the NSF where he finished 5th, is also in the mix, as well as Isah Salihu. In fact, the MoC Grand Prix is pitting seven of the eight finalists from the NSF against each other, and it remains to be seen if a new 400m champion will emerge at the 2nd MoC Grand Prix.