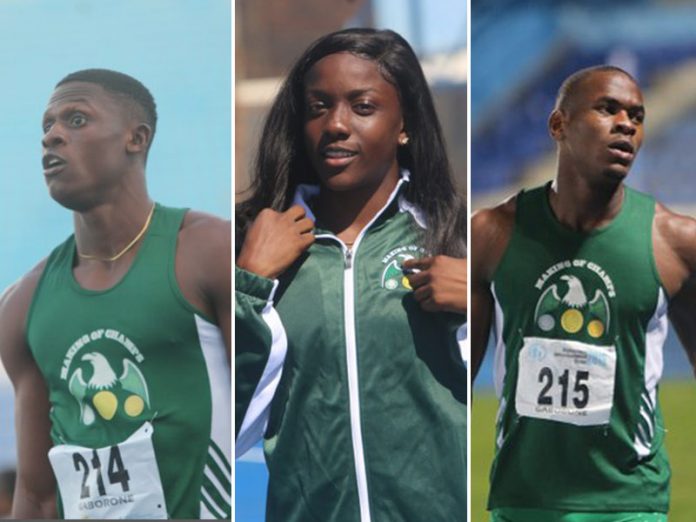 When the trio of Emmanuel Ojeli, Jeremiah Jakpa and Joy Udo-Gabriel left the shores of Nigeria to compete in their first ever international meet, they had great expectations and it was an opportunity they fully grasped.

Having been invited for the Gaborone International Meet last weekend, these Making of Champions (MoC) athletes craved for good performances ‘which like a pilot they hoped would help take-off’ their season in what is a packed calendar. It got off like they anticipated, and they had a lot to cheer leaving Botswana.

Ojeli, a 400m runner, laid a perfect foundation for his season when competing in his first ever 100m race, he ran out to a brilliant 10.61s Personal Best (PB) at the Ijebu-Ode All-Comers meet. For a quarter-miler to run that fast in his first race of the season which wasn’t his forte, it showed signs of what was to come.

The 2019 season has come in leaps and bounds for Ojeli, bagging a sponsorship deal with Shell Nigeria Exploration and Production Company (SNEPCo) in February, an incentive that has propelled him even more as he sat for his JAMB examination to prepare for his University education.

On arriving Gaborone, he wasn’t one of the top names headlining the event, but Ojeli ensured that he made the spectators and organisers take notice of him after racing to victory in the 400m B Final, chalking off more than a second from his previous PB of 46.98s and clocking a new one of 45.91s.

It’s not just that he won, it was the manner and execution of how he did that was very thrilling. Running from lane 7, it would be difficult to control the race without burning out coming into the home straight. Ojeli started well, running a measured race after 250m and in the cluster in the last bend, he accelerated to earn a comfortable victory. Swaziland’s Andile Lusenga finished 2nd in 46.36s and Namibia’s Mahmad Bock 3rd in 46.44s.

To put into proper context the magnitude of what Ojeli did, it’s been only four months when he ran 46.98s to win a bronze medal at the National Sports Festival in Abuja. Cutting it down by over a second from last December in his first 400m in 2019 is what makes it more impressive.

That mark sees Ojeli become the fastest Nigerian quarter-miler in the world this year, and earned him an All African Games qualification in Morocco later this year in August.

“This is just the beginning” a very delighted Ojeli said after his race last weekend. An athlete brewing with this kind of confidence, surely he has a strong belief in what he can do.

Also on the PB train was Jakpa who equally made his mark competing in the two finals of men’s 100m and 200m races.

Unlike in 2018 when he started his season with a 10.6 opener in the 100m, Jakpa would be even be happier that this year he clocked 10.45s opener for the 2019 season to finish 3rd in men’s 100m in Gaborone, something he said afterwards the he hopes to build on.

In Gaborone, Jakpa gave Zambia’s Sydney Siame a good run in the 200m final, coming out from the bend before the 2018 African Championships finalist and well into the lead as they headed for the home straight. However, the more experienced Siame had to dig in deep to win the race in a time of 20.71s.

For Jakpa, it was an encouragement, as he becomes the second fastest Nigerian in the 200m this season, and in the 100m he’s the 4th fastest Nigerian in 2019, that’s also factoring in that he had only competed once in this event this year. Certainly a good bedrock to kick off from.

Just like Jakpa, Udo-Gabriel also competed in both the 100m and 200m in the women’s categories. Before travelling to Botswana, Udo-Gabriel had only one race under her belt this season, running at the Ijebu-Ode All Comers meet with a Season’s Best of 24.44s in the women’s 200m.

Incidentally, her first race last weekend was in the 200m and although Botswana’s Oarabile Tshosa gave her a good fight, Udo-Gabriel did just enough to get to the line in 24.14s, a new SB for her. Tshosa finished 2nd in 24.29s and Budzani Nancy 3rd in 25.09s.

Some minutes later in the 100m, Udo-Gabriel led at some point in the race but Botswana’s Tsaone Sebele had a stronger finish to win with a PB of 11.51s. Udo-Gabriel settled for 2nd place with an SB of 11.56s and Loungo Matlhaku 3rd in 11.59s.

The race was Udo-Gabriel’s first 100m this season, and with this kind of opener, she’s definitely on the right path for better performances this season.

Last year was a breakthrough year for the 19-year-old University of Lagos undergraduate, winning Bronze medal at the Commonwealth Games, and an individual Bronze in the women’s 100m at the African Senior Championships.

All three MoC athletes have secured qualifications for Morocco, and there’s no doubt that with their progression, they will be some of Nigeria’s front-runners at the 2020 Tokyo Olympics.