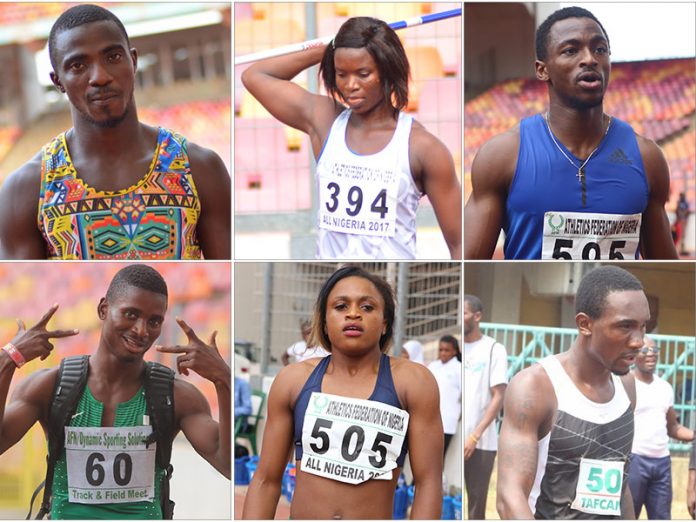 Without mincing words, it was a difficult year for Nigerian athletes in 2017! The expectations from Athletics lovers were high coming into this year, but most Nigerian athletes couldn’t dominate their events, especially as there was a shortage of competitions due to the National Sports Federations elections which destabilized the Athletics calendar.

Nevertheless, some athletes were still able to meet some of their personal targets. In this two-part series, we will chronicle some of the Nigerian Athletes that were able to distinguish themselves in 2017.

Emmanuel Arowolo can definitely draw out plenty of positives from 2017. Coming into this year, Arowolo would have hoped to make his maiden appearance at the World Championships in London, and even though he didn’t achieve that, he was able to run below 21-seconds for the first time in his career after clocking a wind-aided time of 20.84s (+3.4) in Cameroon in June.

He was also able to go one better than the 3rd place he achieved at the National Trials in 2016 to become a National Champion in the 200m this year.

He started his season in April at the Track and Field Coaches Association of Nigeria (TAFCAN) Trials, which took place at the Yaba College of Technology in Lagos where he clocked the overall fastest times in both the 100m and 200m.

At the meet, he ran a hand-timed 10.2s to finish ahead of Making of Champions’ (MoC) Peter Edwin, while also clocking a 21.0s to win the 200m. This certainly served as a spring board for Arowolo to compete alongside stronger athletes at the National Champs.

The highlight of his season was at the National Championships. Going into the 200m, Arowolo had to bring his A game as he was contending against experienced legs like Obinna Metu and 2015 Champion Tega Odele.

That he did- as he won a keenly contested race, crossing the line in 21.16 to take the GOLD ahead of Odele and MoC’s Jerry Jakpa.

It was Arowolo’s first senior title, and with his recent advancement, he would be one of the male athletes to watch out for in 2018.

It’s been a blissful year 2017 for Aniekeme Alphonsus as very few Nigerians can boast of winning a Junior and Senior title in the same year. In short, that was the story of Alphonsus, which made us include her in our Top 12 Nigerian Athletes of 2017.

What probably spurred her on to such heights this year was learning that she had been granted a full Track Scholarship to the Oral Roberts University (ORU) in Tulsa, Oklahoma in the US in late 2016.

Since her successes in the 2015 season where she won several medals for Nigeria at Youth and Junior levels including three medals at the 2015 African Junior Championships, Aniekeme took 2017 by the scruff of the neck.

Aniekeme participated in the Athletics Federation of Nigeria (AFN)/ Making of Champions (MoC) National Youth and Junior Championships where she counted on her experience to clinch the title in a time 11.74s to beat MoC’s Joy Udo Gabriel (11.75s) and Blessing Ogundiran (12.13s).

She also made it a double when she went further to secure the 200m title, having pulled out of the same event last year when an injury prevented her from doing the sprint double.

Little did she know that bigger glory laid ahead of her just few weeks after her beautiful performance at the juniors. She headed into the National Championships hoping to upset the apple cart.

She was definitely able to pull the chestnut out of the fire as she came from behind in the 100m to race to GOLD in a time of 11.52s, with Ogundiran settling for the 2nd spot.

The only dent for her definitely would be not making it to the IAAF World Championships. Nonetheless, she would be able to beat her chest on her outstanding performance this year, especially on the home front.

Samson Nathaniel became the first Nigerian male athlete to meet the qualifying standard for the World Athletics Championships which took place in London. That in itself is a testament of his dominance on home soil this year.

He and his sister, Glory Nathaniel (we will talk about her later on in the series) also became the second set of siblings to represent Nigeria at the IAAF World Championships, following in the footsteps of twin sprint stars Davidson and Osmond Ezinwa, whose last outing at the World Championships was in Seville in 1999.

Since his breakout year in 2015 where he represented Nigeria at the All-Africa Games in Congo Brazzaville, Nathaniel has surely made it a point of duty to join Nigerian great quarter-milers to put his footprints in the sands of time.

Shrugging off the disappointment of not making it to the Rio 2016 Olympic Games, Nathaniel warmed himself up for the season ahead at the TAFCAN Trials where he clocked a hand-timed 21.3s in the 200m.

He however ditched the 200m later on in the season to focus on his signature event which was the 400m. The switch paid off in outstanding manner as he stormed to a new Personal Best (PB) 45.23s while running at the AFN/Dynamic Sporting Solutions meet in June of this year, surpassing his previous mark of 45.80s set two years ago at the African Games.

Nathaniel also got the title he yearned for as he beat the likes of Bamidele Emmanuel and Prosper Ogbonna to claim the GOLD medal in the 400m at the National Champs. He was also the only male Nigerian quarter-miler to meet the entry standard the 2017 World Championships.

It was however a different narrative for him at the World Championships as he only competed in the heats, coming 5th with a time of 46.63s. His dismal performance was attributed to his late arrival to London.

Going by how Nathaniel met the standards of the World Championships without hassle, he can definitely go on to do greater things in 2018 if given adequate support.

It’s been a while a Nigerian sprinter dominated the home front in Athletics. Seye Ogunlewe definitely did that with so much aplomb and poise as he claimed his third consecutive 100m title at the All Nigeria Track and Field Championships in Abuja earlier in 2017.

Ogunlewe, however, didn’t have it all rosy on his way to clinching the title as he had an injury-laden season prior to getting to the Nigerian Championships.

In fact, he was limited to only few races this season because of the niggling pain in his body, that it almost threatened his appearance at the Championships.

One of the handful of races he took part in this season was at the Newham Network Open Series in England, where he participated in the 200m and ran a wind-aided 20.91s.

Heading into the National Championships proper, Ogunlewe would have had two goals in mind: to defend his title, and meet the qualifying standards for the IAAF World Championships. The first he was able to achieve, the second- not so much.

Participating only in the 100m, Ogunlewe maintained an unbeaten run in the course of the championship, winning his heat in 10.39s before displaying a controlled performance to win his semi-final race in 10.40s.

In the final of the race, the 26-year old dominated a field that featured former champions like Ogho-Oghene Egwero and Obinna Metu to win in 10.30s. Seye would now set his sights on 2018 where he would be looking to represent Nigeria at the Commonwealth Games and the African Championships.

When you erase a 14-year old Decathlon National Record (NR) in your country, you are definitely worthy of mention in any Top 12 list. That’s why we’ve got Peter Moreno on this countdown.

Even though he was not able to meet the qualifying standards for the World Athletics Championships this year, he was still able to write his name in Nigerian Athletics history.

Moreno would surely take delight in the fact that he now holds two NRs as he previously had broken the NR in the Pole vault to set the new mark at 4.60m at the 2015 African Games in Congo Brazzaville.

The former Hastings and Brighton and Hove athlete who now competes for his local club at Windsor, had the highlight of his season at the England Senior and U-20 Combined Events Championship, which took place in May in Bedford, where he won Silver .

By virtue of his performance, he broke Lee Okoroafor’s NR of 7240 points in the Decathlon, set during the 2003 All-Africa Games in Abuja, which earned him a Silver medal behind Mustafa Taha Hussein of Egypt.

Moreno’s impressive performance this season earned him a nomination in the British Army Sports Award for 2017.

Taking the No.7 spot on our rankings is Kelechi Nwanaga! Here is a lady who has had to overcome the lack of quality infrastructure in her discipline to set a new National Record (NR) in the women’s Javelin throw.

Competing while using a training Javelin, Nwananga was still able to churn out impressive performances this year.

At the Nigerian Championships in July, the 2015 African Games Champion Nwanaga claimed her third successive title in the women’s Javelin throw which she won with a distance of 53.04m. Priscilla Zever and Kasie Ugeh won Silver and Bronze respectively.

However, the apogee of her season came few days later at the Warri Relays and CAA Grand Prix as she broke a 15-year NR with a 58.15m throw to win the women’s Javelin event, erasing the previous record of 55.30m set by Sorochukwu Ihuefo in 2002.

Even though Nwanaga was just less than three meters shy of meeting the IAAF standards for this year, she most likely would take solace in the fact the she competed with an inferior javelin, as compared to the standard equipment being utilised by her foreign counterparts.

Do you agree with our list above? Let us know what you think in the comments section.