In what has been described as an innovative move by many , the International Olympic Committee (IOC) has approved the inclusion of four mixed-gender events to the schedule of the Tokyo 2020 Olympic Games.

The mixed relays seem to have gained some ground in Athletics in 2017, with some of the world’s best athletes competing in several events ranging from the mixed 4x100m and mixed 2x300m, to the mixed 4x400m and mixed 2x100m at the 2017 Nitro Athletics series held in Melbourne in February.

Many will recall how multiple Word Record (WR) holder Usain Bolt inspired the Bolt All Stars (BAS) team comprising of himself, Asafa Powell, Jenna Prandini and Jeneba Tarmoh to victory in the mixed 4x100m relay at the first leg of the Nitro Athletics.

The first major Athletics event the mixed 4x400m was competed in was the 2017 IAAF World Relays held in the Bahamas in April, where the hosts took GOLD ahead of Team USA, with Jamaica finishing in 3rd place.

It was an electrifying race, and quite exciting to see men and women run together on the same legs – indeed it made for a very unpredictable race, with huge swings in who took the lead from one leg to the next! This experiment at the World Relays must have been a resounding success for the mixed 4x400m to have been immediately added to the Olympic roster.

Indeed, the inclusion of the mixed 4x400m relays to the Olympic Games could open the door for more quartermilers to make it to Tokyo, and if taken seriously, could be another event where Nigeria could target a medal! After all, seven of the 13 Olympic medals won by Nigeria in Athletics are from the relays!

That notwithstanding, the logistics involved in incorporating the mixed 4x400m relay into the schedule of the Olympics, in addition to the men and women’s 4x400m relays, could prove quite tasking as it leaves the question of whether or not athletes would be able to double in the single gender 4x400m, as well as the mixed 4x400m.

This predicament was best captured by the International Association of Athletics Federations (IAAF) in its reaction to the IOC’s announcement:

“The IAAF is delighted that the IOC would like to include a mixed 4x400m relay in the Athletics programme of the Tokyo 2020 Olympic Games. This new discipline, tested earlier this year in Nitro Athletics and at the IAAF World Relays, has been hugely successful and appealing for athletes and spectators alike.

“Pitching teams of two men and two women together with the added dimension of team tactics make this a vibrant, youthful and exciting competition. However, the introduction of the mixed relay does have implications on the athlete quota and programme of Athletics at the Olympic Games.

“We should not expect the athletes entered to compete in the men’s and women’s 4x400m relays, from which the participants for the mixed relay will be naturally drawn, to compete in a third round of heats and finals for the mixed relay without allocating the appropriate space and time in the programme or enabling teams to bring additional athletes.”

Perhaps the solution to this conundrum will be for more countries will toe the path of the US, which came with an exclusive team for the mixed 4x400m relays to the Bahamas, and for the IAAF to increase its quota of athletes in the 4x400m. This could see Nigeria and other teams taking as many as nine male and nine female quatermilers to the Olympics!

It also goes without saying that the mixed 4x400m at the next World Relays in 2019 would almost certainly serve as a qualifiers for the 2020 Olympics, with the first eight teams gaining automatic qualification for the Games. 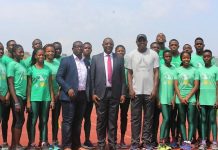