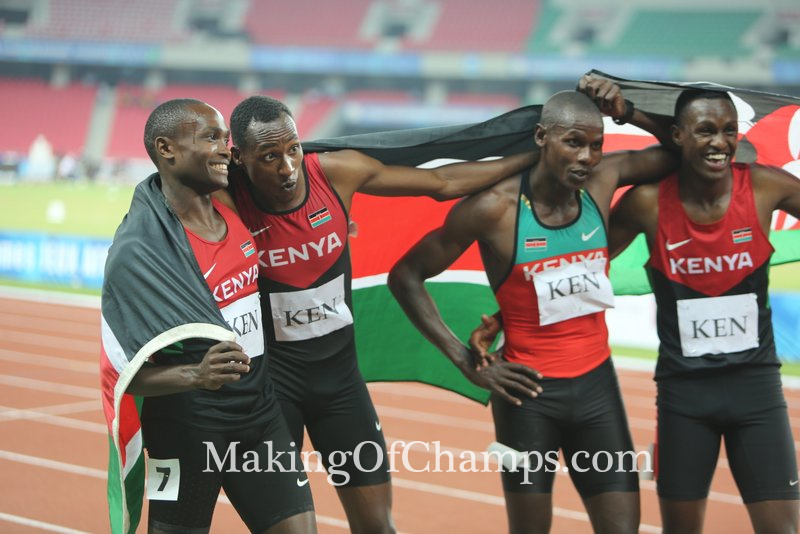 The Kenyans are beginning to hold their own in the sprints, and there was no better way of showing that they meant serious business than creating an upset to win the men’s 4x400m relay in a Championship Record (CR) of 3:00.34, erasing the 28-year old record of 3:00.55, which incidentally, was set by Nigeria in Nairobi.

The quartet of Raymond Kibet, Alex Sampao, Kiprono Koskei and Boniface Mweresa were too strong for Botswana, which had newly crowned 400m champion, Isaac Makwala running the anchor leg. That notwithstanding, Makwala could only follow in 2nd place with a National Record (NR) of 3:00.95. The Beijing 2015 finalist tried to leave it until much later in the race, before attempting to coast home to victory.

However Mweresa gave him no breathing space, charging down the finishing line to take GOLD. Algeria’s Abdelmalik Lahoulou who won the 400m Hurdles on Wednesday, used his wealth of experience to secure Bronze for his country, finishing ahead of the Nigerian quartet comprising of Nathaniel Samson, Robert Simmons, Henry Okorie and Orukpe Erayokan. The team placed 4th after posting a time of 3:03.52.

Nigeria’s 4x400m women were unstoppable, taking the victory in 3:27.12 to finish ahead of Botswana (3:32.84) and Kenya (3:35.91). Three of the four members of the team – Funke Oladoye, Tosin Adeloye and Patience Okon George, all competed in Beijing where Nigeria narrowly lost out on a place on the podium. Rita Ossai who was an unused substitute at the World Championships, ran the first leg in Brazzaville.

Cote d’Ivoire’s Hua Wilfried Koffi scooped his second 200m GOLD medal of the season, racing down the home straight ahead of Nigeria’s Divine Oduduru who ran a Personal Best (PB) of 20.45s while trying to catch up with the Ivoirian, and Odele Tega (20.58s). Koffi won the half lap event at the World University Games this year, and then picked the Bronze medal in the 100m at the All-Africa Games.

One of the major contenders for the top prize, Obinna Metu finished 5th (20.74s). Championship favourite, Marie Josee Ta Lou lived up to expectations, racing to the women’s 200m title in 22.57s. The Ivoirian sprinter had to be taken away from the track immediately after the race as the competition had no doubt taken a toll on her.

The 26-year old won GOLD in the 100m and anchored the 4x100m team to Bronze in Brazzaville, prior to the 200m race. She was indeed one of the standout athletes of the All-Africa Games. The Nigerian pair of Ngozi Onwumere and Lawreta Ozoh won Silver and Bronze in 23.24s and 23.37s respectively, while Ghana’s Janet Amponsah finished in 4th place (23.49s).

Nigerian champion, Amaka Ogoegbunam extended her domination to the continent, taking GOLD in the women’s 400m Hurdles in her very first outing at the All-Africa Games. She beat defending champion, Ajoke Odumosu who is still trying to get back to top shape after taking time out to have a baby, and then recover from an accident. Ogoegbunam won the race in 55.86s while Odumosu returned a time of 57.63s.

Former African and World Junior champion, Dawit Seyaum inspired an Ethiopian 1-2 in the women’s 1500m, taking the day with a time of 4:16.69, while team mate Beso Sado followed with 4:18.86, leaving Kenya’s Beatrice Chepkoech to take Bronze in 4:19.16. The Ethiopians completely dominated the women’s Half Marathon, taking the Top 3 positions in the event, making it a total haul of three medals in the event alone.

Ihab Abdelrahman does a CR too!

Auriole Dongmo of Cameroon emerged champion in the women’s Shot put event, securing the top spot with an NR of 17.21m. Nigeria’s Claire Uke settled for Silver in 16.64m, in addition to the GOLD medal she won in the Discus a day before, thus winning two medals in her first ever outing for the country. South Africa’s Sonia Smuts was 3rd with a throw of 15.92m.

Team Nigeria’s Samson Idiata went on to win the men’s Long Jump titled despite being fouled in his second to the last jump, and recording a no-jump on his final attempt. His mark of 7.83m recorded in his very first jump ensured that he finished ahead of Senegalese athletes, Ndiss Kaba Badji (7.74m) and Mamadou Gueye (7.69m). It wasn’t an impressive debut outing for Ezekiel Ewulo who finished 7th with 7.39m.

Botswana’s Kabelo Kgosiemang regained the High Jump title he lost in Maputo four years ago. The five-time African champion took the GOLD medal after making a clearance of 2.25m. Sudan’s Ali Mohamed and Chris Moleya of South Africa both cleared 2.22m to follow in 2nd and 3rd place respectively.