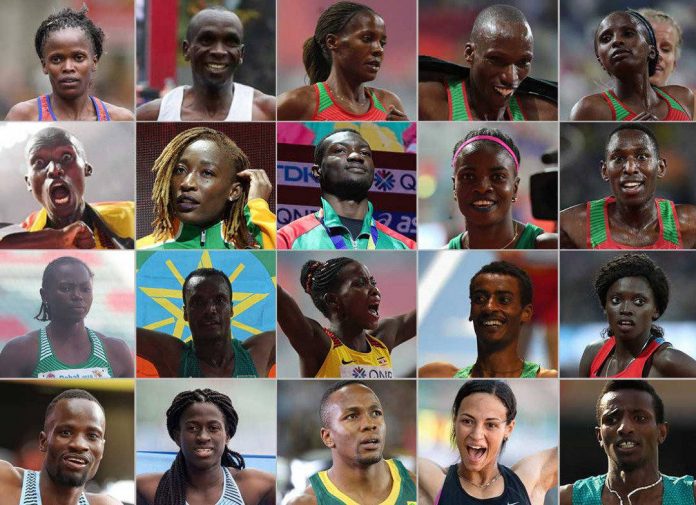 Egypt’s Bassant Hemida made history for her country by becoming the first female sprinter to make the finals of the sprint double at the African Games and to clinch medals in both events, storming to a National Records (NR) of 11.31s and 22.83s to take Bronze in the 100m and Silver in the 200m. She also became the first Egyptian woman to compete in the sprints at the World Championships, finishing 14th overall in Doha in the women’s 200m.

Botswana’s Galefele Moroko improved on her Personal Best (PB) in the 400m not less than five times this year and was the woman to beat at the African Games where she stormed to a new PB of 51.53s to win her semifinal race and qualify for the World Championships, and another PB of 51.30s to win GOLD. She also anchoreed Botswana to Silver and at the World Championships, won her heat in a big PB of 50.59s.

Gina Bass shone like a thousand stars at the 2019 African Games In Rabat where she claimed Silver in the 100m with a National Record (NR) of 11.13s to qualify for the World Championships and 2020 Olympics! She fared even better in the 200m as she beat tournament favourite Marie Josee Ta Lou to cross the line 1st in a new NR of 22.58s! At the World Championships, she made the 100m semis and 200m final where she placed 6th.

In 2019, Akani Simbine won the South African 200m title in 20.27s and garnered as many as four wins (heats and finals) on the circuit over the 100m this season. He won his heat and semi-final of the men’s 100m at the World Athletics Championships but was just edged into 4th place in the final. He also anchored the South African 4x100m men’s team to a new African Record of 37.65s.

Halimah Nakaayi upset championship favourite Ajee Wilson to emerge World Champion in the women’s 800m, taking GOLD with a National Record (NR) of 1:58.04 to become Uganda’s first women’s 800m World Champion! Prior to the World Championships, Nakaayi competed at the African Games in Rabat where she claimed Bronze in the 800m – her first major medal of any colour.

Selemon Barega was recently named the Male Rising Star at the World Athletics Awards, following his 2nd place finish in the 5000m at the World Championships, and finished 5th at the World Cross Country Championships in Aarhus earlier in the year. The Ethiopian also produced World U20 leads at both the 5000m and 10,000m with 12:53.04 and 26:49.46, respectively.

In one of the biggest highlights of the 2019 Diamond League season, Nijel Amos in Monaco, took the lid off the men’s 800m as he produced a sterling run that had him take the win in 1:41.89. The time was just 0.16s off the Personal Best (PB) he set in 2012 and stands as the fastest time in the world in almost seven years – since David Rudisha set the World Record (WR). He also broke 45s over the 400m for the first time in his career at the Meeting Citta Di Padova in Italy.

Yomif Kejelcha’s heroics in 2019 started from the indoor season where he broke Hicham El Guerrouj’s World Indoor Mile Record and improved his indoor 1500m Personal Best (PB) in the process as he was timed 3:31.25, which elevated him to third on the all-time list behind Samuel Tefera and Hicham El Guerrouj. He opted for the 10,000m at the World Championships where he earned a Silver medal in only his second try over the distance.

2019 was the year Ese Brume clinched two elusive medals – GOLD at the African Games and Bronze at the World Championships in Doha – Nigeria’s first World Champs medal in six years! Brume leapt to a new Personal Best (PB) of 6.96m (-2.1) in Erzurum in July and hit the 7m mark for the first time in her career while competing in Bursaspor, winning the event with a new PB of 7.05m, which put her at No.2 in the world in 2019 and No.2 on the all-time African list after compatriot Chioma Ajunwa (7.12m).

Due to a nagging foot injury, Conseslus Kipruto opened his season placed at the Paris Diamond League where he placed 5th, and two days later, Did Not Finish (DNF) the final of the 3000m Steeplechase at the African Games. He managed 7th place at the Brussels Diamond League final, finishing the race in 8:14.53. Nevertheless, he won his heat at the World Championships and successfully defended his title by beating Ethiopia’s Lamecha Girma by just 0.01s.

Muktar Edris was sidelined for almost two years due to an injury to his Achilles tendon, which took a heavy toll on his training pattern. With a bye given to the defending World Champions, Edris went to Doha with a Season’s Best (SB) of 13:29.53, done at the Lausanne Diamond League where he managed 18th place. However, he put up an amazing show of strength, grit and honour to sweep past his fellow competitors to retain his 5000m crown in Doha where he clocked 12:58.85.

Tobi Amusan dominated the 100m Hurdles at the Meeting Pro Athlé Tour de Sotteville les Rouen, clocking 12.49s to shatter her previous lifetime best of 12.57s. At the African Games, she surpassed Glory Alozie’s long standing Games Record, setting a new one of 12.68s to retain her GOLD medal from 2015. At the World Champs, she clocked new Personal Best (PB) of 12.48s in the heats and semis, winning both races. She settled for 4th place in the final with 12.49s.

Marie Josée Ta Lou won five of her seven indoor races this year, capping it off by storming to a World Leading 7.02 victory in the 60m at the PSD Bank Meeting in Dusseldorf. She had a series of modest outings in the Diamond League (DL), and her best showing was at the Prefontaine Classic (11.02s). At the African Games, she retained her 100m title with a time of 11.09s and won Bronze in the 200m. She equalled her PB of 10.85s to win her heat, and then clocked 10.87s in the semis at the World Champs, before settling for Bronze in the final.

One of Hellen Obiri’s biggest achievements this year came in March when she became the first woman ever to win senior world titles indoors, outdoors and at cross country when she clocked 36:14 at the IAAF/Mikkeller World Cross Country Championships in Aarhus. She then focused on defending the 5000m title she won in London two years ago, setting a Championship Record (CR) of 14:26.72 to win GOLD!

Hugues Fabrice Zango smashed his own African Indoor Record of 17.23m at the Meeting de Paris in Lievin, replacing it with a stunning 17.58m . He won the final of the Triple Jump at the French National Championships with a massive 17.50m, then leapt 16.88m to win GOLD at the African Games. At the World Championships, Zango broke his Personal Best (PB) and African Record (AR) with an impressive 17.66m to win Bronze, becoming the first Burkina Faso athlete to win a medal at the World Athletics Championships.

Joshua Cheptegei started the season on a very good note when he secured his first senior world title at the IAAF World Cross Country Championships in Aarhus, Denmark. He ran a fabulous race in the men’s 5000m final at the Brussels Diamond League, breaking his Personal Best (PB) by over two seconds and returning a time of 12:57.41. Despite winning the 5000m at the Diamond League final, he opted for the 10,000m in Doha, which he won in a PB of 26:48.37, the second fastest time in the event’s history at the World Championships.

In 2019, Eliud Kipchoge became the first man in the history of the marathon to complete the 26.2 miles under two hours in what was tagged the ‘ the INEOS 1:59 challenge’, which had 41 pacemakers lined up to help in this attempt. Kipchoge finished with an official time of 1:59:40.2. However, the time did not count as an official World Record (WR) as a result of the rotating pacemakers and lack of open competition. He was also named the World Best Male Athlete in 2019!

Kenyan middle-distance expert Timothy Cheruiyot’s report card in 2019 suggests strongly that he is one of the finest runners in the world. He only lost one race over the distance in 2019 – to Elijah Manangoi. He emerged National Champion in the 800m/1500m, and won his heat, semifinal and final races at the World Championships in Doha. His winning time – 3:29.26, is the second fastest time in the world in 2019!

Chepkoech had an almost flawless 2019 season. She set a Meeting Record (MR) and World Lead of 9:04.53 at the Shanghai Diamond League in the women’s 3000m Steeplechase. After her 4th place finish in London two years ago, the World Record (WR) holder made sure she left plenty of room for any possible errors in Doha as she stormed to a 20m lead after the opening lap, and then kept the chasing pack at bay, powering home in a time of 8:57.84 to claim her first global title.

Kenya’s Brigid Kosgei delivered a dizzying head-twister of a performance to blow away Paula Radcliffe’s World marathon record while racing at the Chicago Marathon. The Briton’s mark of 2:15.25 had stood unchallenged for 16 years, yet Kosgei obliterated it by an astonishing 81s, after opting not to compete at the World Championships. Kosgei also broke the Great North Run Record in 64:28, the fastest time for a woman over 13.1 miles. She had also won the London Marathon in 2:18:20 in April.