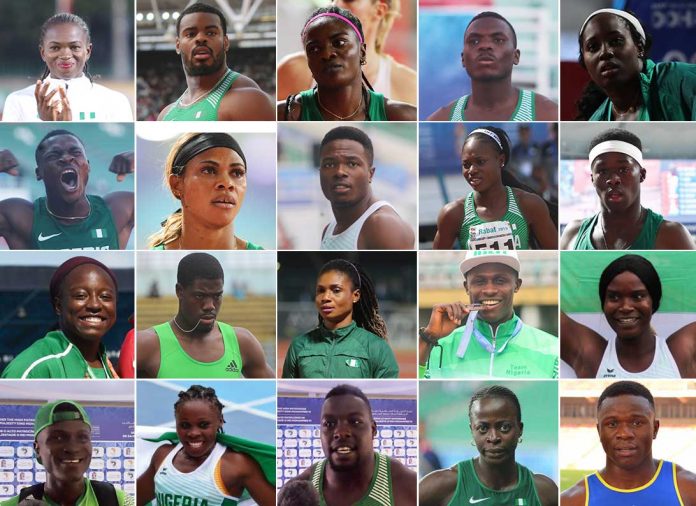 Year 2019 proved to be a groundbreaking one for several Nigerian athletes, not just by virtue of it being an African Games and World Championships year, but by the fact the season berthed new stars who went on to record impressive performances at national and international level.

In spite of being faced with a tough season blighted by lack of competitions amongst other challenges, these athletes gave their fans something to savour in 2019.

Featuring for the first time on our countdown, Enoch Adegoke takes our 20th spot this year. The Sprinter won the men’s 100m and settled for 4th place in the 200m at the Africa U18 and U20 Championships in Abidjan. He then led the men’s 4x100m team to GOLD. Also, Adegoke won the 100m titles at the 2nd Making of Champions (MoC) Grand Prix and the Cameroon Grand Prix, setting a PB of 10.12s in the former and a time of 10.15s in the latter.

Dotun Ogundeji is also a new entrant on our yearly list. The thrower won Silver for Nigeria in the Discus and placed 4th in the Shot Put at the African Games – his first outing for Nigeria. In addition, he set a new PB in the Shot put after throwing 21.05m at the Rafer Johnson/Jackie Joyner-Kersee Invitational in Los Angeles.

Abejoye Oyeniyi drops out of the Top 10 (7th) from last year’s ranking as he takes our No. 18 spot this year. The hurdler won Silver for Nigeria at the African Games and set a new PB of 13.67s in the men’s 100m Hurdles at the Dwight Phillips Invitational Decatur in Illinois.

After featuring in last year’s ‘Breakout Athletes of the year’ feature, Emmanuel Ojeli gets into our rankings for the first time as he takes the No.17 spot. The quatermiler set a new PB of 45.91s to win the 400m B Final at the Gaborone International Meet in Botswana back in April. Ojeli retained his 400m title at the MoC Grand Prix, clocking 46.25s and then claimed his first 400m National title with a time of 45.93s. He then won Bronze in the 4x400m at the African Games.

Kemi Francis is another athlete that makes her debut in our rankings. The Heptathlete won Silver in the Heptathlon at the African Games in a new PB of 5683 points. She was also a part of the GOLD-winning 4x400m quartet at the Games. Prior to that, she won the Heptathlon and 100m Hurdles titles at the National Championships in Kaduna.

After featuring at No. 8 in our countdown last year, Grace Anigbata takes our No. 15 spot this year. Anigbata won GOLD in the Triple Jump at the African Games with a mark of 13.75m. She was undefeated outdoors in the triple Jump this year, as she claimed the National Junior College Athletic Association (NJCAA) Triple Jump title in 13.96m in her debut season.

Kelechi Nwanaga retains her No. 14 spot from last year! Nwanaga successfully defended her Javelin title at the African Games with a throw of 55.88m. In addition, she won her 4th National title with a throw of 50.30m.

After missing out on our countdown last year, Patience Okon-George gets back into our rankings as she takes the No. 13 spot. The quartermiler claimed her fourth consecutive 400m National title with a Season Best (SB) of 51.66s. She also helped Nigeria’s 4x400m relay team clinch GOLD at the African Games and made the semis of the World Championships. 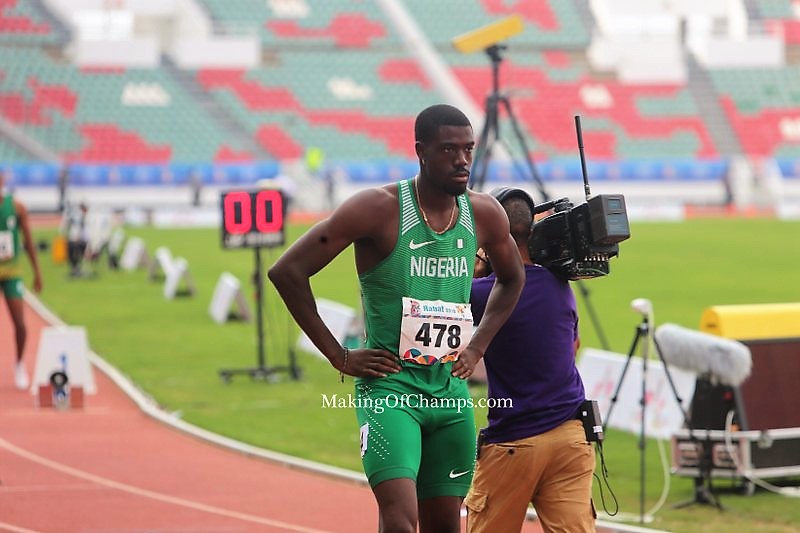 Retaining his No. 12 position from last year is Chidi Okezie! The quatermiler won Bronze at the African Games, clocking a PB of 45.61s in the process, the fastest time by a Nigerian quartermiler in 2019. Also, he anchored Nigeria’s 4x400m relay team comprising Emmanuel Ojeli, Samson Nathaniel and Shedrach Akpeki to Bronze in a time of 3:04.33.

Temilola Ogunrinde drops two places from last years rankings as she features on No.11 this year. Ogunrinde won her second continental Hammer Silver medal, throwing a mark of 64.68m at the African Games. She also improved on her previous National Record (NR) by over 1m, throwing an impressive 68.85m in June to finish 5th at the NCAA Championships. 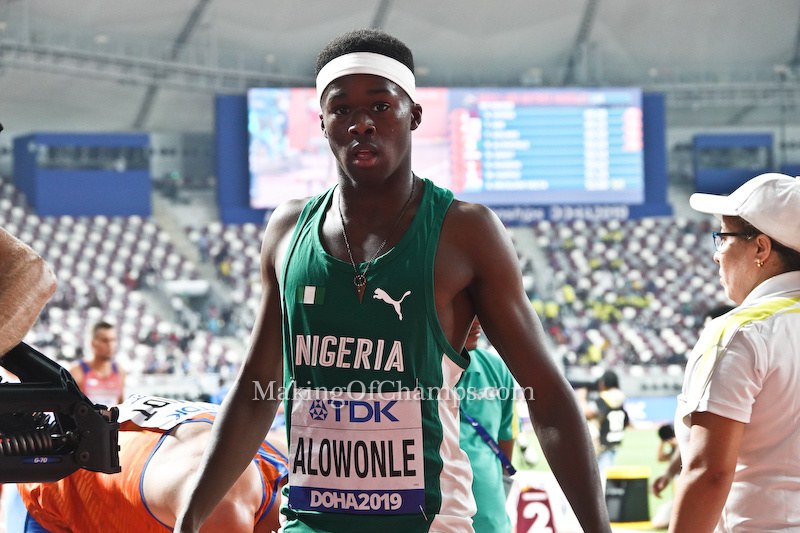 Making his first apperance on our rankings is Rilwan Alowonle. The hurdler was an epitome of consistency in the 400m Hurdles this year. He missed out on a podium finish at the African Games as he clocked a new lifetime best of 49.42s to place 4th. He also made his debut at the World Championships where he reached the semifinals.

Favour Ofili is a new entrant on our countdown, and she duly takes our No 9 spot this year. The youngster ran three new PBs in the 200m and six PBs in the 400m this year! She won double GOLD in the 200m/400m at the Africa U18/U20 Championships in Abidjan and went on to win her first senior National title in the 200m. A month later, she won Silver in the 400m at the African Games to qualify for the World Championships in Doha where she made the semifinal.

Usheoritse Itsekiri moves fives places up from last year’s rankings as he takes our No. 8 spot this year. The sprinter claimed the 100m/200m titles at the National Championships. He also won Bronze in the 100m at the African Games, clocking a new lifetime best of 10.02s to qualify for the Tokyo 2020 Olympics, and then Silver in the 4x100m. 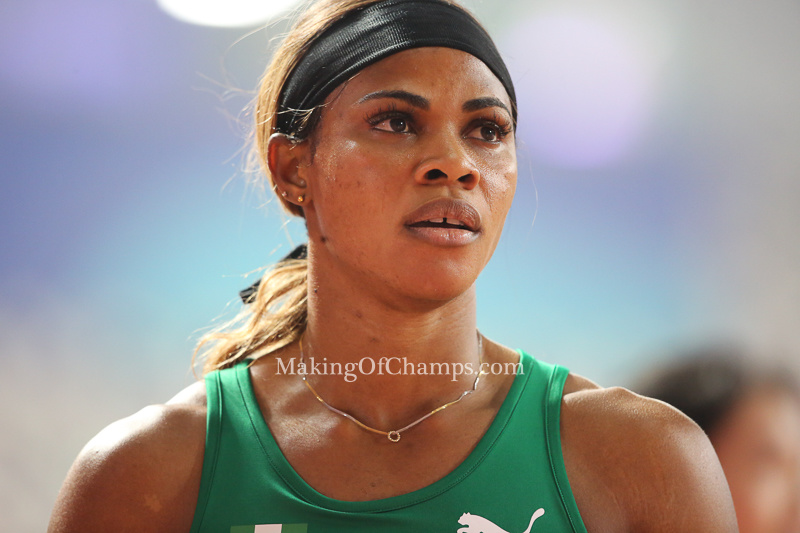 Dropping three places to No.7 this year is Blessing Okagbare. The African Record holder in the 200m had a somewhat mixed bag of a season. She, however, was able to claim victories at the Rabat (100m) and Eugene (200m) legs of the prestigiuos IAAF Diamond League this season. Also, she sealed qualification for the Tokyo 2020 Olympics in the sprint double.

Our biggest mover on this year’s ranking is Chioma Onyekwere. The Discus thrower moved a massive nine spots up from her 15th position last year. Well, it was mitigated by her impressive showing in the Discus in 2019 in which she won six of the eleven competitions she partook in, throwing five new PBs in the process. Onyekwere won GOLD at the African Games and she also reached a new PB of 61.38m at the World Championships. 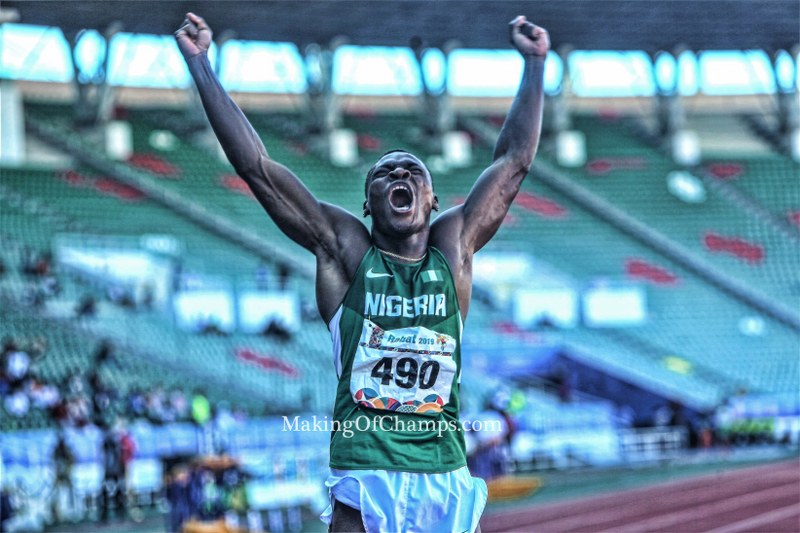 For an athlete who didn’t feature on our list for the last two years, it is rather telling the sort of expoits he achieved to have paved his way into the Top 5 this year. Ekevwo became Nigeria’s first men’s 100m Champion at the African Games since 2007 after he clocked 9.96s to claim victory. He was also part of the 4x100m relay team that won Silver for Nigeria at the Games. Also the sprinter made the semis of the 100m at the World Championships. 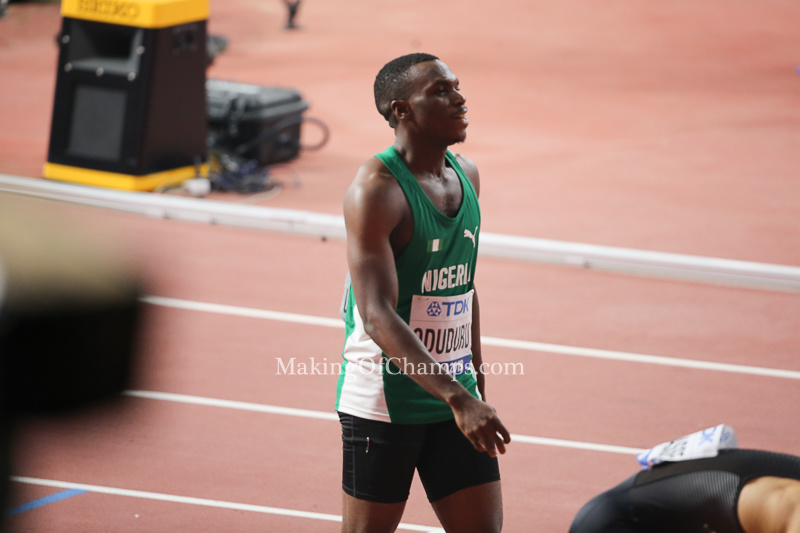 Oduduru moves one spot to No. 4 this year. The sprinter won his first NCAA Indoor title in March with a time of 20.08s, clocking the third fastest time in history. In June, he clocked a PB of 9.86s and National Record (NR) of 19.73s in the 100m and 200m to win the double at the NCAA Championships. Oduduru won Silver in the 200m and 4x100m at the African Games, while also going on to make his debut in the Diamond League and the World Championships.

Enekwechi drops one place to third in this year’s list. The thrower broke the National Record in the Shot Put in August where he reached 21.80m. Enekwechi won GOLD at the African Games, setting a new Games Record of 21.48m. The African Champion made his debut in the Diamond League and reached the final of the World Champs where he placed 8th.

For the first time in two years, Tobi Amusan relinquishes her top spot on our yearly rankings. The sprint-hurdler, nonetheless, had a magnificent season. Amusan defended her African Games title in a Games Record of 12.68s and reached the final of the the Diamond League in Brussels after producing spendid displays on the circuit in the course of the season. She narrowly missed out on a podium finish at the World Championshps but still set a new PB of 12.48s in the heats and semis of the championship.

Taking our No. 1 spot this year is Ese Brume! In August, the Long Jumper became the third Nigerian in history to hit the 7m mark when she soared to a new PB of 7.05m. The African Champion then followed suit by winning her first African Games crown. Brume ended Nigeria’s six-year wait for a World Championships medal as she took the Bronze at the global championship with a leap of 6.91m.