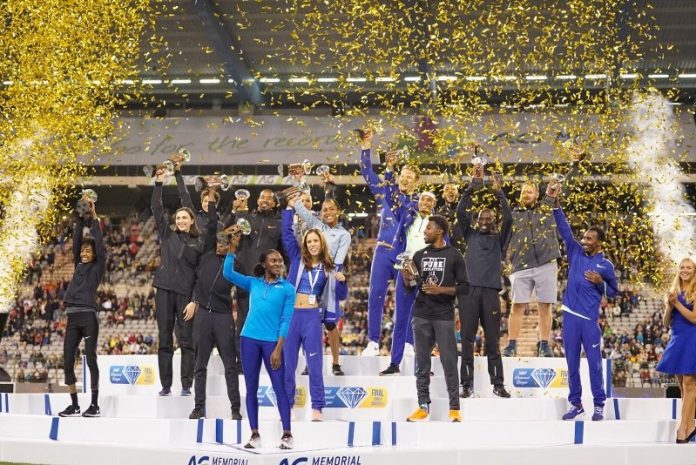 After four months of high-energy action and 14 meets across the globe, the 2019 IAAF Diamond League (DL) came to a halt at the AG Memorial van Damme in Brussels, Belgium, as 16 more champions emerged in the IAAF top athletics meet.

Although the rain pattered down and temperatures dropped to autumnal levels just half way into the meet, athletes still braved the odds in order to get their hands on the Diamond Trophy and the $50,000 cash reward on offer for each winner.

World and Olympic champion Christian Taylor’s bagged his seventh DL Trophy of his illustrious career as his second round 17.85m Meeting Record (MR) was good enough to get him the win, with Will Claye unable to improve on his 17.22m from the second round. The win drew him level with the record of Renaud Lavillenie.

In the men’s Discus, Daniel Stahl, who hauled his implement out to 68.68m in round one, didn’t improve on that mark all through the competition as he claimed his first Diamond Trophy. Lukas Weisshaidinger was a surprise second, while Fedrick Dacres was 3rd. Yaime Perez won the women’s Discus with 67.24m.

Maria Lasitskene saw off competition at 1.99m with a first time clearance to claim a fourth Diamond Trophy, while Katerina Stefanidi clinched her fourth title as she cleared a height of 4.83m in the Pole Vault.

Dina Asher-Smith won the women’s 100m in rather interesting fashion. The Briton was quickest out of the blocks, with Shelly-Ann Fraser-Pryce getting up alongside her. However, Asher-Smith led by a nose at half way, and as she reached the last 10m, the European Champion relaxed over the closing strides to move away from her illustrious Jamaican rival, winning in a Season’s Best of 10.88s to win her first DL title.

Danielle Williams became the first Jamaican woman to win a sprint hurdles Diamond League title, clinching the women’s 100mH in 12.46. She zipped over the barriers with terrific verve to leave World Record holder Kendra Harrison (12.73) chasing her shadow, crossing in second just ahead of Nia Ali (12.74). Tobi Amusan was disqualified for a false start.

In the men’s 110m Hurdles, Orlando Ortega reclaimed the 110m hurdles title he last won in 2016.The Spaniard was up to the first barrier first and never surrendered his lead, despite the twin challenge of Ronald Levy and Sergey Shubenkov. He ran a clean race to hold both of them off to win in 13.22.

After collecting the 1500m title last week in Zurich, Sifan Hassan ran away from Letesenbet Gidey with 200m to go to win the 5000m in 14:26.26.  It was a race that played into the Dutchwoman’s hands, as Gidey took second place, with last year’s Champion Hellen Obiri unable to live with the ramped up pace at the close, coming 4th in the process.

It was a third straight DL title for Timothy Cheruiyot, as he cruised to the 1500m in 3:30.22. The Kenyan was the only one to go with the pace, with Ayanleh Soulieman and Samuel Tefera unable to keep up.

While they faded, the Ingebrigtsen brothers Jakob and Filip took up the second and third spots, and it remained that way till the end of the race.