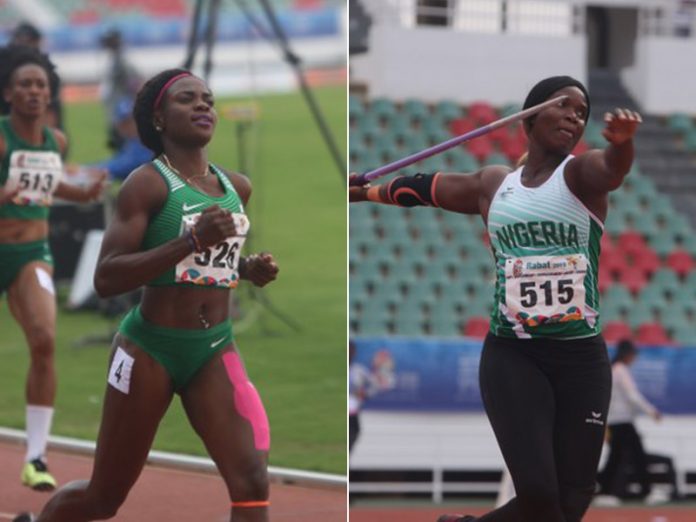 Team Nigeria chalked up 15 medals (4 GOLD, 7 Silver, 4 Bronze) to end Day 13 at the African Games going on in Morocco, as it moved one place up to third in the overall standings.

Like Day 12, athletics provided most of the highlights for Nigeria with Weightlifting also contributing a fair share of the medal haul on the day.

Tobi Amusan continued her dominance on the African soil as the sprint-hurdler added another African Games title to her haul by claiming victory in the women’s 100m Hurdles in a Games Record of 12.68s, chalking off 0.06s from the time set by Glory Alozie at the Games in Johannesburg in 1999. Grace Ayemoba was 4th in 13.46s.

Kelechi Nwanaga also added another GOLD medal to her trove as she claimed victory in the women’s Javelin. Her mark of 55.88m was 50cm better than South Africa’s Joan Van Dyke who took Silver, while her compatriot Sunette Viljoen won Bronze in 53.44m.

Africa U18 double Champion Favour Ofili was in remarkable form in the women’s 400m final. Ofili ran a blistering 51.68s to take Silver in the race, a mark which also sees her qualify for the IAAF World Championships taking place in Doha next month. Patience Okon-George was 5th in 52.18s.

In the men’s final, Chidi Okezie came from behind to claim Bronze, racing to a new Personal Best (PB) of 45.61s. Botswana’s Scotch Leungo scorched to a time of 45.27s to win GOLD. Nigeria’s other representative in the final Emmanuel Ojeli was 6th in 46.05s.

There were also medals for Nigeria in the relays as the quartet of Joy Udo-Gabriel, Mercy Ntia-Obong, Adekunle Jasper and Rosemary Chukwuma got around the baton to win the women’s 4x100m relay final, crossing the line in 44.16s.

The men settled for Silver as the quartet of Raymond Ekevwo, Divine Oduduru, Emmanuel Arowolo and Usheoritse Itsekiri raced to a Season’s Best of 38.59s. Ghana won GOLD with 38.30s

Meanwhile, Rilwan Alowonle qualified for the final of the men’s 400m Hurdles after he clocked 50.77s to place 3rd in Heat 3.

Juwon Opeyori will compete in the final of the men’s Singles tomorrow after he defeated Owen Mulenga of Zambia in two straight sets (2-1,2-1). In the women’s draw, Ajoke Adesokan got the better of Egypt’s Hany Doha 2-0, 2-0 to book a spot in the final.

Equally, the women and men’s double’s team both qualified for the finals. The duo of Adesokan and Deborah Ukeh got past South Africa’s Meghan De Beer and Juanita Sholtzt in straight sets. Also, Opeyori teamed up with Godwin Olufa to beat Egypt’s Mostafa Kamel and Abdel Hakim 2-1, 2-1.

In the women’s Single, Edem Offiong made it into the semis after she defeated Egypt’s Reem El-Eraky 4-1.

Caroline Oko-Uokha won Silver in the women’s 71kg (224kg), Clean-Jerk (116kg) and Snatch (95kg), as she lost out to Egypt’s Rania Mahmoud who clinched GOLD in all three categories.