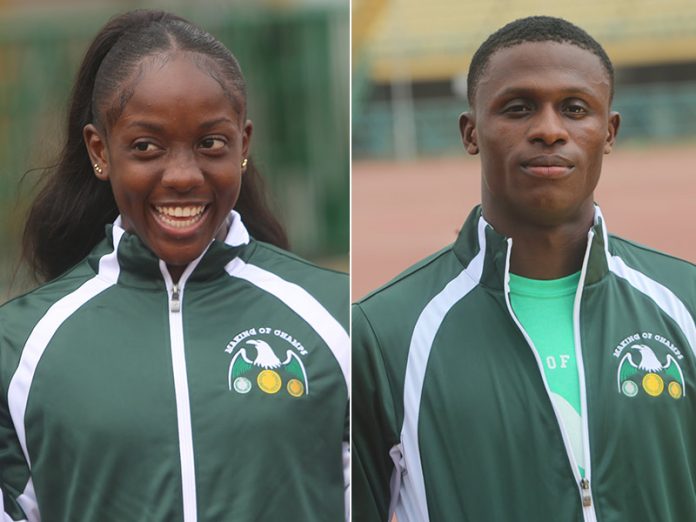 Two Making of Champions (MoC) athletes were crowned National Champions at the 2019 All Nigeria Athletics Championships which was staged at the Ahmadu Bello Stadium in Kaduna from July 25th to 27th.

2018 National 100m Junior Champion Joy Udo-Gabriel upgraded to Senior Champion after holding off the challenge from the rest of the field, leading the race from start to finish to claim her first National title at senior level with a time of 11.58s.

Udo-Gabriel who recently returned to Nigeria after competing in a few meets in Europe, had earlier topped the overall standings in the heats with her Season’s Best (SB) of 11.49s, and then raced to victory once more in the semis, winning Heat 3 with a time of 11.51s.

In the 200m final B, the 2018 African Championships Bronze medallist dominated the race in a time of 24.08s, with Anita Taviore and MoC’s Kelechi Christian following in 2nd and 3rd respectively with 24.17s and 24.56s.

Meanwhile teammate Emmanuel Ojeli maintained his unbeaten run in the 2019 Athletics season when he raced to the second fastest time of his career- 45.93s to win his first National title at senior level.

Having won the African Games Open Trials last month, the talented Ojeli who is the fastest Nigerian in the world in the 400m this season, arrived the championship as the man to beat and he did not disappoint!

The Shell-sponsored athlete, who made his international debut for Nigeria at the Cameroon CAA Grand Prix a fortnight ago, left it until late, running an epic 120m to kick past the rest of the field to claim victory.

Although the 200m may not have lived up to Jakpa’s expectations, considering he won last month’s African Games Trials with a PB of 20.59s, he would at least be consoled by the fact that he equalled his 100m PB of 10.32s in the semis, having first clocked the time during last year’s National Sports Festival (NSF) in Abuja.

Reelfruit-sponsored Blessing Oladoye continued her impressive run this season by racing to the fastest time of her career in the women’s 400m final, having been inspired to a PB in the race that was dominated by Patience Okon-George who won her fourth National title with an SB of 51.66s.

Returning a time of 55.3s to dominate her heat, Oladoye set a new PB of 54.03s in the final to settle for 4th place at her first ever outing at the National Senior Championships.

Favour Ashe also made an impressive debut at the National Championships by clocking two PBs in the men’s 100m. He was drawn in the same heat as Itsekiri who eventually won the sprint double, and the 17-year old made the most of the competition as he bettered his PB to 10.77s to finish 2nd in the race. In the semis, he further lowered his PB to 10.72s to settle for 6th position.

Another athlete that equalled her 100m PB is 2017 African Junior Champion Kelechi Christian, who raced to a time of 11.96s in the semis of the 100m in 5th place, improving on her time of 11.98s set in the heats.

Success Umukoro broke 12s for the first time while competing in the women’s 100m semis at her first outing at the National Championships. The Reelfruit-sponsored athlete set a PB of 11.96s to finish 4th in the race that was won by fellow MoC athlete Udo-Gabriel, which was an improvement from the time of 12.14s, also a PB, which she clocked in the heats to place 2nd. Umukoro was the woman to beat in the D Final of the 200m which she won with 24.71s.

After competing in the 400m heats, the pair of John Clifford and Gracious Ushie set new PBs while racing in the men’s 200m B Final where they placed 2nd and 3rd with times of 21.73s and 21.78s respectively, bettering their former times of 21.94s and 22.12s.

Glory Nyenke made the finals of the women’s 100m Hurdles and 400m Hurdles respectively, finishing 5th in the former and 6th in the latter.