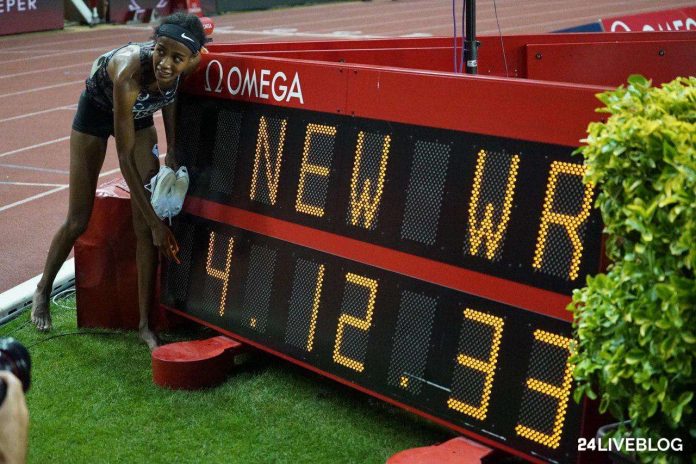 On a night of sensational running at a hot and humid Stade Louis II, Netherlands’ Sifan Hassan produced the crowning performance of the ninth IAAF Diamond League (DL) meeting of the season as she took two tenths of a second off the women’s world mile record, coming home, alone and triumphant, in 8:12.33.

In a meet known for favorable racing conditions and a historically fast track, the previous World Record (WR) of 4:12.56 that Russia’s Svetlana Masterkova ran in 1996 came seemingly under threat going into the final lap. She eventually came through to claim victory a remarkable WR time.

It was the sixth world record set at this gem of a meeting at the business end of the season.

Behind her, Laura Weightman of Great Britain made the most of the fabulous pace by pushing to the line for second place in a Personal Best (PB) of 4:17.60, with Canada’s Gabriela Debues-Stafford finishing third in a National Record (NR) and PB of 4:17.80.

In the sprints, Justin Gatlin brought his wealth of experience to the fore as he clinched the win in the men’s 100m in 9.91, just the tiniest of smidgens ahead of Noah Lyles. The result put both men into the top four in the standings, as both move closer to a place in the final.

After her impeccable performance in Hungary few days ago, Olympic Gold medalist in the women’s 400m, Shaunae Miller-Uibo produced another stellar display to win the women’s 200m in a Season’s Best (SB) of 22.09s. Jamaica’s Elaine Thompson came through the line in 2nd place in 22.40s, while Dafne Schippers was 3rd.

Nigel Amos, meanwhile, continues to float on as a dominant force in this year’s 800m. The Botswanan already had his DL final place in the bag, but that didn’t stop him from rampaging to a MR of 1:41.89.

In the face of all the chaos in the men’s 400 that saw Jonathan Jones running the full track even though the athletes had been called back, Steven Gardiner remained impressively unflappable.

Even with a terrier-like Abderrahman Samba snapping at his heels as he came down the final straight, Gardiner’s stride was as very smooth and he eased home in 44.51.

Fast rising hurdler, Sydney McLaughlin continued to live up to the hype of a precocious talent to claim her second win on the Road to the Final with a world-leading 53.32 in the 400m hurdles.

The 19-year-old surged away from the rest of the field and hurled down the figurative gauntlet at the feet of Diamond Trophy holder Dalilah Muhammad. She is not in the final yet, but after two victories, it is safe to say she has her eye on the Diamond Trophy.

Despite a false start from Pedrya Seymour which led to a slight delay in the women’s 100m Hurdles, Kendra Harrison still clocked an SB of 12.43 to take yet another victory in Monaco and came within a hundredth of a second of the MR.

The men’s Pole Vault and Triple Jump produced the biggest highlights of the day on the field.

In the Pole Vault, Pole, Piotr Lisek leaped to a WL, MR, NR, PB of 6.02 to make it two wins on the trot for himself after his exploits in Lausanne, while Christian Taylor third round effort of 17.82m saw him claim victory ahead of Will Claye and Pedro Pablo Pichardo in the men’s Triple Jump.

Andreas Hofmann produced a dominant performance in the men’s Javelin. The Diamond Trophy holder won comfortably with a third-round effort of 87.84m.

Elsewhere, the women’s high jump comes to a close as Mariya Lasitskene fails to clear 2.04m and finishes on 2.00m. Another comfortable victory for the Diamond Trophy holder.