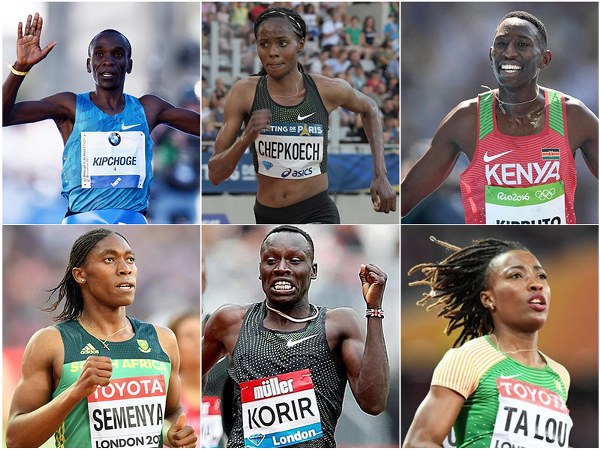 Yesterday, we published the first part of our Top 12 African Athletes for 2018. Let’s conclude the series by completing the countdown from 6 to 1.

6. Emmanuel Korir
What a year 2018 was for Emmanuel Korir! For someone who just switched to 800m racing two years ago, to winning all but one of his races in 2018, it’s simply outstanding to say the least.

He started 2018 by clocking a world-leading African Indoor Record of 1:44.21 in what was his only indoor race of the year.

In the Diamond League (DL), victory at the season opener in Doha saw Emmanuel Korir laying an early claim to the favourite’s tag in the 800m, though Wycliffe Kinyamal would soon become the man to beat as he soared around two laps to victories in both Shanghai and Rome.

By the time London came around though, Korir was back in business. The Kenyan not only made atonement for not winning a medal at the World Championships in London in 2017, he was also able to show the world that he is as good an 800m runner as he is in the 400m.

He went on to produce a time of 1:42.05 to win at the meet with the time being the fastest in the world since 2012, and puts him at sixth on the all-time list, and a front-running exhibition reminiscent of David Rudisha’s World Record (WR), Olympic GOLD medal-winning run on the same track five years earlier.

His only defeat of the year came at the African Championships in Asaba, where Botswana’s Nijel Amos beat him to the win.

From then on, there was no stopping him, as he followed up with victory in Birmingham, before winning the final in Brussels.

Korir took that form to the IAAF Continental Cup in Ostrava where he inspired a 1-2 finish for Africa in the 800m final. He also recorded a 400m PB of 44.21, putting him 6th on the world list in that event.

In 2018, Marie Josee Ta Lou had an almost flawless indoor season in which she won all but one of her races. However, what it doesn’t tell us is that she had a long-standing problem with her glutes to the point that she couldn’t lift her legs in January. Still, she still won Silver for Cote d’Ivoire at the World Indoor Championships in March.

The month of May was when the beast in her finally began to show, as in the first DL race of the season, she beat the likes of Elaine Thompson, Murielle Ahoure and Blessing Okagbare-Ighoteguonor to win in a new Lifetime Best of 10.85s. She rode a streak of eight races after that in which she was unbeaten in the 100m.

Going into the African Championships, Ta Lou was the overwhelming favourite, and she lived up to that role admirably, putting on a brutal display of dominance in the final to win in 11.15s. She followed it up with a win in the 200m, before anchoring the Ivorian 4x100m team to a Silver medal behind Nigeria.

Despite coming unstuck in the DL finals in Zurich where she placed 3rd, the Ivorian was a class apart form the rest of the field at the Continental Cup in Ostrava, winning in 11.14s. She also placed 3rd in the 200m.

With the IAAF World Championships coming up in Doha in the fall of this year, Ta Lou’s 2018 performances would certainly put fear into the heart of her rivals.

4. Conseslus Kipruto
Kenya has an enviable record of winning every Olympic Steeplechase GOLD since 1980.

After winning the Olympic and World titles in 2016 and 2017 respectively, one would have thought that there was nothing left for Conseslus Kipruto to achieve in the men’s 3000m Steeplechase in 2018!

He started the year with a bang, adding the Commonwealth Games title to his mushroom list of accolades, having inspired a clean sweep of medals for Kenya in the event. Kipruto won with a new Games Record of 8:10.08.

In the DL, Kipruto did not enjoy the dominance that he had done in recent years, finishing 2nd in Eugene, 3rd in Monaco, and not securing a victory until Birmingham.

What he did in the final in Zurich, however, made the rest of the season pale in significance. Having accidentally kicked off his shoe early in the race, Kipruto ran on regardless.

With more than three quarters of the race ahead of him, he had to fight the natural tendency to panic and re-strategise against a field that included the eager Moroccan, Soufiane El Bakkali, whom he had beaten to GOLD at the World Championships in London in 2017.

The Moroccan must have thought he had done enough as he drove home around the final bend with the field in his wake. But Kipruto wouldn’t give in.

All the way down the home straight, Kipruto with his bare foot, refused to let El Bakkali move clear, and after clearing the final hurdle a meter behind the leader, he found the drive to move past and win. He was tagged the one-shoe wonder after that.

Kipruto won the African title in Asaba, and there was to be no match for him at the Continental Cup in Ostrava where he also emerged victorious. 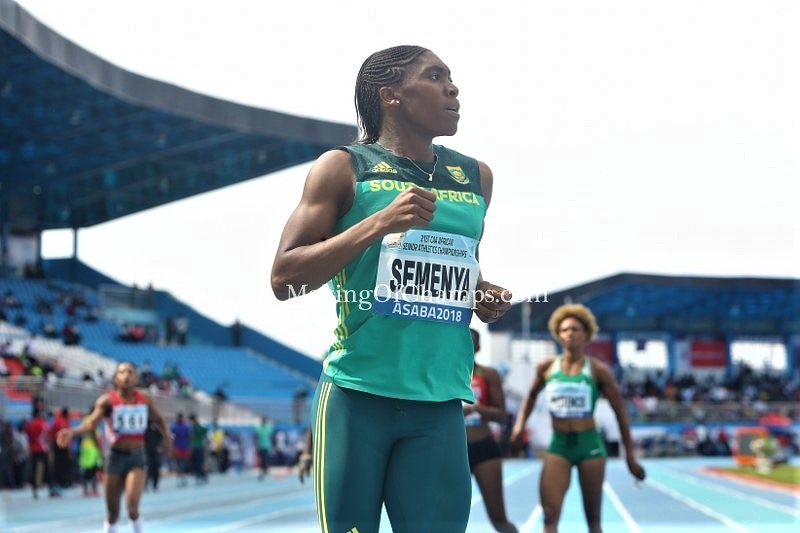 Caster Semenya is simply untouchable, as she was one of only two African athletes to go unbeaten in 2018. The South African extended her undefeated streak in the 800m to 29 finals this year, a campaign that included victories at the Commonwealth Games, African Championships, IAAF Diamond League final and IAAF Continental Cup.

Semenya stayed through to her promise that she wants to prove her mettle in the 1500m, and she started with a domineering display at the Commonwealth Games where she won GOLD in the event, adding the 800m title four days later.

She continued her imperious performance in the DL this season, with her best performance coming in Paris where she raced to a staggering Personal Best (PB), African Record (AR), Diamond League Record (DLR) and Meeting Record (MR) of 1:54.25 to make her fourth on the world all-time list, emphatically stamping her feet as the undisputed best athlete in this event in recent years.

The Olympic Champion capped her DL season with a characteristically dominant performance in the final in Zurich to take her third Diamond Trophy in as many years.

Also, she won double GOLD at the African Championships in Asaba, as she was arguably the biggest performer of the tournament when she clocked 49.96s in the 400m, breaking the South African Natioal Record (NR) in the process.

Her season ended at the Continental Cup where she won the 800 and placed 2nd in the 400m, lowering the previous NR to 49.62s. She later anchored Team Africa to a Silver medal in the mixed 4x400m. 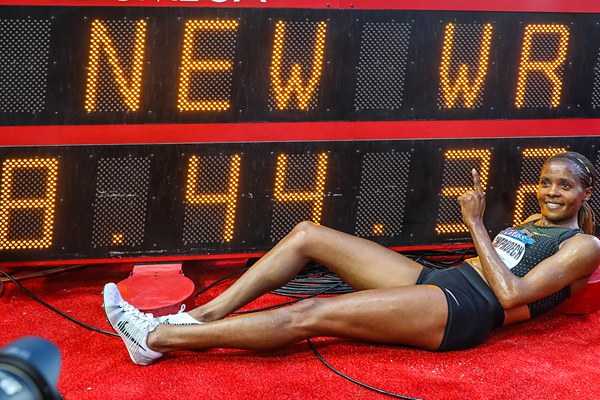 Very few WRs get shattered in an Athletics season, but Beatrice Chepkoech made sure she made her way into the history books in the past year.

The Kenyan distance runner won seven of her eight steeplechase races, including the IAAF Continental Cup, African Championships and IAAF Diamond League final. Earlier in the year, she won the IAAF World Indoor Tour in the 1500m, and took Silver in that event at the Commonwealth Games.

However, what stunned the Athletics world was when she smashed the women’s 3000msteeplechase WR at the IAAF DL meeting in Monaco, clocking 8:44.32 to take eight seconds off the previous mark.

The 27-year-old Chepkoech, who went into the race with the fastest time of the season at the time, 8:59.36, has never won a major global medal. Missing a water jump and having to run back during last year’s World Championships final hardly helped her chances.

She was clear of the field with three laps remaining, and when the bell rang, it was just a matter of her running another fantastic split on the last leg. Chepkoech gave it her all and claimed victory in a WR time, thereby becoming the first Kenyan to hold the Steeplechase WR.

What became clear soon after she had taken an extraordinary margin of eight seconds off the former WR of 8:52.78, running 8:44.32, was how little of a surprise the achievement was to Chepkoech – albeit she hadn’t even anticipated running quite as fast.

Chepkoech will certainly hope to improve her WR in 2019!

Cometh the man, cometh the hour! In this case though, cometh 2:01:39. Eliud Kipchoge cemented his status as one of the greatest marathon runners of all time by winning the Berlin Marathon in a new WR, smashing the former mark by 78 seconds. It is the biggest improvement on a men’s marathon WR since 1967.

When the 34-year-old Kenyan crossed the finish line at September’s Berlin Marathon with a jaw-dropping 2:01:39 WR, it was Kipchoge’s ninth straight victory over the distance, a phenomenal achievement, given the limited competitive schedules available to the world’s finest marathon runners.

Underscoring that record is that each of those nine races were of the highest quality: seven were part of the World Marathon Majors series, and another, the 2016 Olympic final.

For someone who back in 2003 seemed to emerge almost overnight to become one of the world’s elite, Kipchoge has shown over the past 16 years that he is in it for the long haul.

To cap Kipchoge’s fantastic season off, he was named the IAAF Male Athlete of the Year, and he duly takes our No.1 spot as the biggest African Athlete in 2018!