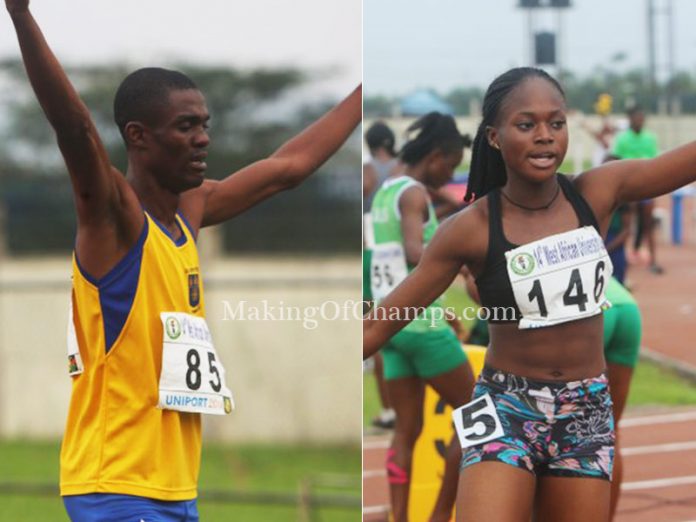 Emmanuel Nimo and Favour Ofili were the exceptional athletes on Day 3 of the Athletics event of the West Africa University Games (WAUG) taking place at the Sports Complex of the University of Port Harcourt (UNIPORT), as they both struck GOLD for their respective universities in the men and women’s 400m.

Donning the yellow and blue stripes of the University of Ghana (UG), Legon, Nimo was a class apart from the rest of the chasing pack, coasting to the victory in 47.66s. University of Benin’s (UNIBEN) Victor Akhalu who tried everything possible to keep up the pace with Nimo, settled for Silver in 47.94s, while Etiamkwaku Torgbenu made it a 1-3 finish for UG after clocking 48.28s.

UNIPORT’s Ofili braved all odds to emerge victorious in the women’s 400m final, clocking a time 53.64s in the process.

Despite coming within whiskers of erasing her Personal Best (PB) of 53.57s set in Algiers, the National Youth Champion would take solace in the fact that she handed defeat to her more experienced team mate, Praise Idamadudu who placed 3rd in the race in 54.49s. Rafiat Nuhu won Silver in 53.83s.

Tomorrow’s men’s 200m final is gradually shaping up to be an epic one as the duo of Enoch Adegoke (Obafemi Awolowo University) and Alaba Akintola (Federal University of Technology, Akure) won their respective semis late in the day.

However, it was Adegoke who laid down the gauntlet after running the fastest time in both heats as he clocked a new lifetime best of 21.18s. Also, Akintola improved on his PB to win his heat in 21.39s.

Praise Idamadudu would be hoping to make amends in the women’s 200m final after she clocked the fastest time of all the heats, winning in 23.76s. Notwithstanding, University of Lagos (UNILAG) 100m Silver medallist, Balikis Yakubu would hope to cause an upset as she also won her heat in 24.11s.

Team UNIPORT’s quest to get their hands on one of the 400m Hurdles titles hit a brick wall as University of Ilorin’s (UNILORIN) Esther Akinde won GOLD in the women’s category despite Abasiono Akpan making a late push on the home straight. Akinde won in 1.03:21.

In the men’s 3000m final, Matthew Nantiere of the University of Cape Coast (UCC), Ghana, claimed victory in 8:41.50, while his countrywoman, Elizabeth Azure, who represented the University of Development Studies (UDS), completed the double with victory in the women’s 10,000m.

Representing the University of Ibadan (UI), ECOWAS and National U20 Champion, Cyprian Oyedele equalled his PB of 2.05m on his way to winning the men’s High Jump.

UNIPORT’s Edwin Agaba won the men’s Pole Vault, jumping a height of 3.80m. Godfred Kpode from UG took the Silver medal with a mark of 3.40m.

Coached by the legendary Ghanaian athlete, Margaret Simpson, Latifat Ali was inspired to win GOLD in the women’s Long Jump for the UCC, winning with a mark of 5.85m. UNIPORT’s Grace Anigbata settled for Bronze, while her teammate Uchechi Brown won Silver.