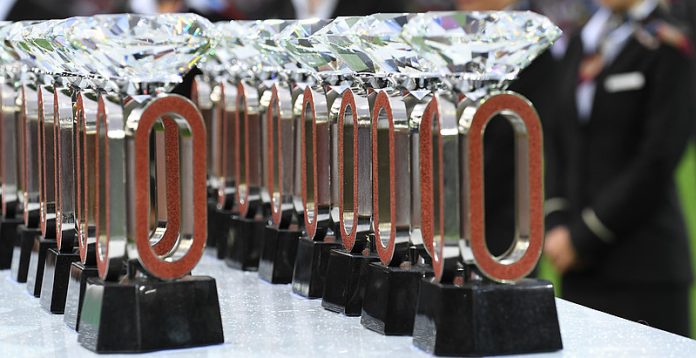 After a fierce, season-long battle for points, the 2018 IAAF Diamond League season will reach its climax, with 32 athletes set to be crowned champions in Zurich and Brussels on August 30th and 31st respectively.

With new rules coming into effect last season, the best Track and field stars who have made it into the finals will now lock horns against each other in the quest to get the coveted Diamond Trophies, and also win the $50,000 prize money.

So let’s segment some of the events into different categories, and bring you the stars who are the contenders to emerge winners this season.

The men’s 100m has been very fascinating this year, with very little to separate the challengers. Christian Coleman began to live up to high expectations as the season wore on, and beat Reece Prescod by just a thousandth of a second in Birmingham earlier this month, while Ronnie Baker remains favorite after wins in Rome, Paris and London.

In the women’s category, Marie Josee Ta Lou has been peerless all through the season. Despite playing the role of bridesmaid for the major part of last season, the Ivorian has been able to prove her class in the women’s 100m, winning all four of her races in the Diamond League in 2018.

However, freshly-minted European 100m Champion, Dina Asher-Smith will hope to put a spanner in the works of Ta Lou claiming her first Diamond Trophy, as both athletes fortuitously share the fastest times in the world this year, having an identical Personal Best (PB) of 10.85s.

The men’s 200m is expected to be a battle between World Champion, Ramil Guyilev and 2017 Diamond Trophy winner Noah Lyles. Like Ta Lou, Lyles is yet to taste defeat in the half-lap event this year, clocking a new lifetime best of 19.65s to win in Monaco.

On Guliyev’s part, the Turkish sprinter will need to top the 19.76s he won the European title with, to stand a chance of taking the title off Lyles.

With most of her competitors opting to run in the 100m, Shaunae Miller-Uibo is the overwhelming favorite to retain her 200m trophy. The Bahamian will however have to be wary of the threat of World Champion, Dafne Schippers.

Of all the qualifiers in the men’s 400m, Steven Gardiner is the only quarter-miler to have gone below 44s this season. Barring any slip up, the Bahamian who ran a PB of 43.87s to win early in the season in Doha, is a shoo-in to win the trophy.

In the absence of Miller-Uibo in the women’s 400m start list, Salwar Eid Nasar is expected to make light work of her other competitors.

Kendra Harrison and Brianna McNeal delivered several thrilling duels on the road to the final, with Harrison beating McNeal in Doha and London, and McNeal taking wins in Shanghai, Stockholm and Rabat.

In what has been an incredible year across board in the women’s 100m hurdles, the rest of the field is also highly competitive. Sharika Nelvis, Danielle Williams and Christina Manning have all run sub-12.60 times this season, and four-time Diamond Trophy winner Dawn Harper Nelson is also on the start list.

Brussels will also witness the final of the men’s 110m Hurdles. Sergey Shubenkov, who is competing as an authorized neutral athlete is the only athlete in the field to have run inside 12s this season. He would certainly keep an eye on Orlando Ortega who emerged victorious in at the last DL in Birmingham.

After winning all six of his DL races and also setting lots of Meeting Records (MR) in the men’s 400m Hurdles, it will be a big miss not having Abderrahman Samba in the final as he is representing his country at the ongoing Asian Games in Jakarta.

His absence has now installed World Champion, Karsten Warholm as the overwhelming favourite to add the Diamond Trophy to the European title he won earlier this month. Not ruling out Commonwealth Games champion, Kyron McMaster who will be on a quest to defend his trophy.

In the female category, it’s been nip and tuck between Dalilah Muhammad and Shamier Little all season. With both athletes not competing in Birmingham in order to be fresh for the finals, we could probably see either of them running very fast, maybe inside 52s for the first time ever. Commonwealth Games Champion, Janieve Russell could also spring up a surprise.

The women’s 800m has pratically been a procession for Caster Semenya all season, as she is expected to retain the trophy she has won in the last two years. The World and Olympic Champion this season, set a new lifetime best of 1:54.25s in Paris. Burundi’s Francine Niyonsaba, who has been on the South African tail all season is an outsider for the win.

It’s going to be a stiff contest in the men’s 800m, with Kenya’s Emmanuel Korir and Botswana’s Nijel Amos facing a rematch of their meeting at the 2018 African Championships. This season, both athletes have gone under 1min:43s.

World Champion, Elijah Manangoi and 2017 Diamond Trophy winner, Timothy Cheruiyot will renew their rivalry once again in the men’s 1500m. The latter has so far had an unblemished record in the DL, winning all five of his races this season. However, Manangoi who has forged a reputation for performing well in finals will give his compatriot a run for his money.

Sifan Hassan has been in blistering form in the 1500m, winning in London and Birmingham to secure her place in the Final.

Hassan is due to compete in the 5000m in Zurich a day earlier, and this could hamper her 1500m chances facing the likes of Shelby Houlihan, who won in Eugene before beating Hassan in Lausanne. Then there’s Laura Muir, whose string of second place finishes saw her book a place in the Final. It promises to be a finely balanced race for the Diamond trophy in the 1500m.

As expected, the Kenyans have held sway all season in the men’s 3000m steeplechase, with as many as seven athletes earmarked to run the finals in Zurich. Benjamin Kigen is the front runner for victory, topping the Diamond League standings with 25 points.

After having a poor start to the season, World Champion, Conseslus Kiprupto has had a bit of renaissance, as he was able to claim victory last time out in Birmingham. Despite the Kenya’s dominance ,Morocco’s Soufiane El Bakkali can thwart their efforts, being the only athlete in the field to have run below 8 minutes.

Meanwhile, Kenya’s Beatrice Chepkoech will hope to consummate her season with the diamond trophy after breaking the World Record in the 3000m steeplechase while running in Monaco.

Renaud Lavillenie had won the Diamond Trophy for seven years in a row before he finally surrendered it to Sam Kendricks last year, and the Frenchman will be desperate to regain his crown in Brussels.

Kendricks, though has been brilliant again this year, winning in Rome, Paris, Rabat and London. Both men, meanwhile, will feel the rest of the field breathing down their necks, with Mondo Duplantis the most promising challenger to the Lavillenie-Kendricks duopoly.

Like the men’s category, the women’s Pole Vault is expected to go down the wire with Katerina Stefanidi and Sandi Morris vying for supremacy in the finals in Zurich.

With the emergence of Juan Miguel Echevarria in the Long Jump circuit this season, the Cuban, who has the best jump of the year (8.68m) will look to end the dominance of Luvo Manyonga when they clash in Zurich.

It also promises to be a thrilling fight for the Diamond Trophy in the women’s long jump as well. Lorraine Ugen is the only finalist to have cleared the seven meter mark this year, but Malaika Mihambo is fresh from a brilliant win in Birmingham, while Berlin Bronze medallist and 2013 Diamond Trophy winner Shara Proctor is also a force to be reckoned with.

Similar to the Long Jump, the men’s Triple Jump will be a two-way battle between World and Olympic Champion Christian Taylor and Cuban jumper, Pedro Pichardo, while Caterine Ibargüen should be able to do enough to defend her crown in the women’s final.

Fresh from his GOLD medal success on home soil at the European Championships in Berlin, Thomas Röhler would hope to replicate his 2014 success and win the Diamond trophy in Zurich.

After Röhler and his compatriot Johannes Vetter had dominated the javelin all season, Vadlejch pulled out a brilliant performance to defend the Diamond Trophy he had won in 2016. Röhler will be hoping to topple Vadlejch, and add a Diamond Trophy to his list of 2018 titles.

In the men’s Shot Put, Olympic Champion Ryan Crouser and Commonwealth Games Champion, Tom Walsh will be on a mission to get the Diamond trophy off the hands of USA’s Darrell Hill, as China’s Lijiao Gong is the favorite to retain her crown in the women’s category.

It will take some good performance to upstage Mariya Lasitskene from retaining her women’s High Jump Diamond Trophy. Watch out for Bulgaria’s Mirela Demireva who halted Lasitskene’s 45 consecutive winning streak in Rabat.

Finally, Australia’s Brandon Starc will be hoping to take advantage of the absence of World Champion Mutaz Barshim as he is the only remaining jumper in the field to jump a height of 2.35m this season.