Home Athletics Asher-Smith & Ta Lou to face off in Birmingham 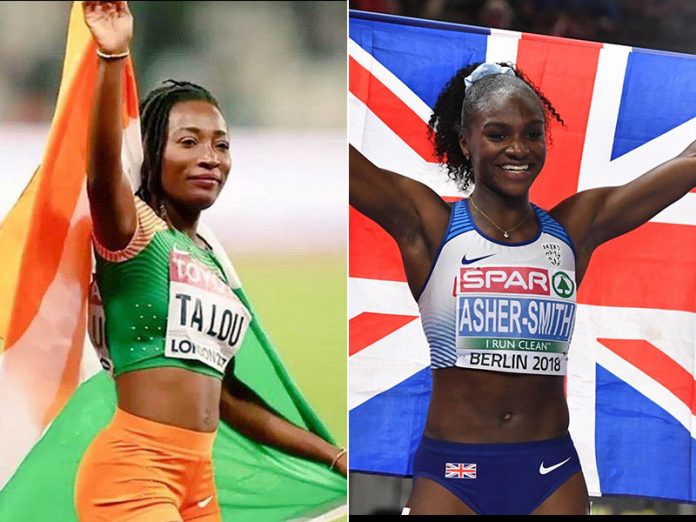 The IAAF Diamond League (DL) heads to Birmingham for the 12th meeting of the 2018 series, with it also being the last stop before the finals in Zurich and Brussels.

While some of the athletes have already booked their tickets to contest for the Diamond Trophy later this month in the Swiss and Belgian cities, others face a race against time to accumulate points in order to be part of the finals.

Here, we take a look at some of the top events to watch out for at the Alexandra Stadium in Birmingham.

The women’s 200m is certainly going to be an enthralling contest, as it pits the reigning African Champion, Marie Josee Ta Lou, against newly-crowned European Champion, Dina Asher-Smith.

Both athletes are currently in blazing hot form, with Asher-Smith seeming to have the upper-hand, having clocked a time of 21.89s last week in Berlin – the fastest time in the world this year.

There has been very little to separate the top athletes in the men’s 100m this season as  Ronnie Baker remains the only athlete to have officially confirmed his place in the finals. Although the American will not be competing at the Muller Grand Prix, his countryman, Noah Lyles, who has the joint fastest time (9.88s) this year, is the is the overwhelming favourite to secure victory.

Lyles’ biggest challenger is expected to come in the mode of another American. World Indoor Champion and 60m World Record (WR) holder Christian Coleman has already had the benefit of feeling the Birmingham support, having won the 60m World title at the IAAF World Indoors in March.

After missing out on the last three 400m races in the DL due to injury, Isaac Makwala will be returning to the circuit this weekend. The Batswana is joined by his compatriot, Baboloki Thebe, who recently retained his continental title, with the newly crowned European Champion in the one-lap event, British star Matt Hudson-Smith also earmarked to run.

Having already qualified for the finals, the trio of Omar McLeod, Sergey Shubenkov and Devon Allen are opting not to compete in Birmingham. Their absence surely paves the way for Jamaica’s Ronald Levy to claim yet another victory, with just British hurdler and World Indoor Champion, Andrew Pozzi the major treat for him.

In a similar vein, DL standings leader in the women’s 400m Hurdles, Dalilah Muhammad is skipping the Muller Grand Prix to focus on the finals in Brussels. However, Shamier Little, who recently won the North American, Central American and Caribbean (NACAC) Championships, and has been a thorn in the flesh of Muhammad this season, is a shoo-in to clinch the win.

After running the fastest 800m in five years last month in London, Emmanuel Korir will look to shake off the disappointment of losing the African title to Botswana’s Nijel Amos. Korir will come up against his fellow compatriots, Ferguson Rotich, Jonathan Kitilit and Elijah Manangoi, all of whom will have another shot at erasing David Rudisha’s WR mark of 1:40.91.

Morocco’s Sofiane El Bakkali dipped below 8mins in the men’s 3000m Steeplechase while coasting to victory last time out in Monaco. The World Championship Silver medallist will however come up against Kenya’s Benjamin Kigen who beat him to victory on home soil in Rabat.

The Javelin throwers who did a 1-2-3 at last week’s European Championships, will all be in action in Birmingham. Germany’s Thomas Röhler headlines the cast after clinching GOLD in Berlin, with his compatriot Andreas Hofmann placing 2nd. Estonia’s Magnus Kirt who beat them both with a monster throw of 89.75m in Rabat, was 3rd in the German City. All three are expected to serve us a thrilling contest.

In the Pole Vault, Olympic, World and now two-time European Champion, Katerina Stefanidi, and Bronze medallist Holly Bradshaw, will renew their rivalry this weekend, just nine days after both made history at the European Championships in Berlin.

At the European Championships, Stefanidi became the first pole vaulter to win back-to-back European titles after clearing a Championship Record (CR) height of 4.85m to beat her compatriot Nikoleta Kyriakopoulou to European GOLD.

The Greek pair were joined on the podium by Great Britain and Northern Ireland’s Holly Bradshaw, who claimed her first outdoor medal at a major championship after clearing 4.75m to secure Bronze.

Finally, the British duo of Lorraine Ugen and Shara Proctor will square up in the women’s Long Jump again. Despite being the World Leader (WL) in the event this year with her jump of 7.07m at the British Championships, Ugen underwhelmed at the European Championships, placing 9th in the final. The Brit will surely be looking for redemption in front of her home crowd.