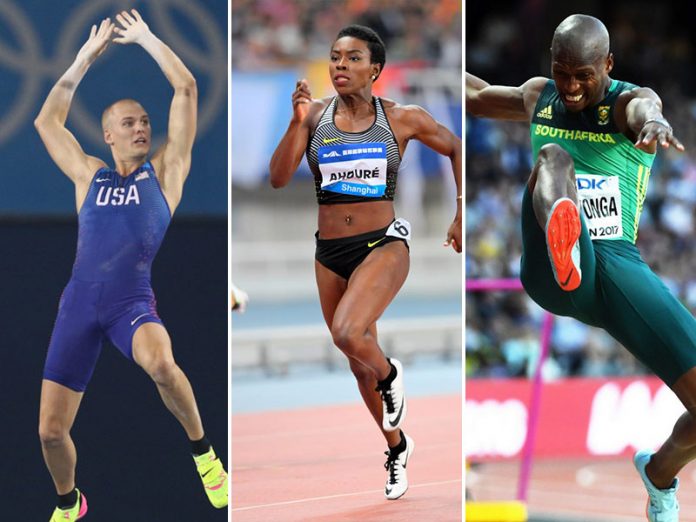 As the Diamond League reaches its half-way mark before the finals in Zurich and Brussels respectively, the world’s top athletes would all convene at the Olympiastadion in Stockholm on the 10th of June for the Bauhaus-Galan Meeting.

With Meeting Records (MR) falling easily in the first four legs of the Diamond League (DL), athletes competing on the day in Stockholm will be hoping the showers of blessings extend to the Scandinavian country, all in a bid to garner more points in order to put them in contention for the Diamond Trophy.

Here are some of the duels to watch out for:

Murielle Ahoure finally claimed her first DL victory this season in the women’s 100m race in Oslo, albeit in the absence of her country woman Marie Josée Ta Lou. The Ivorian will once again lace her spikes on Sunday, in what is a reprise of the start list we witnessed in Oslo.

However, British sprinter Dina Asha-Smith might have other ideas. Asha-Smith chased Ahoure from start to finish in Oslo on her way to setting a new Personal Best (PB) of 10.92s.

Also, Nigeria’s Blessing Okagbare-Ighoteguonor will be seeking for redemption after finishing outside the Top 3 in her last two races in Eugene and Oslo.

Without Noah Lyles and Jereem Richards competing in the men’s 200m, reigning World Champion Ramil Guliyev would have expected the event to be a cake walk. However, he would have to keep an eye on Bahamian sprinter Steven Gardiner, who is currently No.3 on the world standings with his time of 19.75s, as only Clarence Munyai and Lyles have gone faster this season, having both clocked 19.69s.

After getting the better of Phyllis Francis in Oslo, Salwa Eid Naser will look to continue her outstanding start to the season that has seen her win the women’s 400m in her last two races. The Bahraini is the only athlete in the lineup to have gone below 50s this season.

The recent rivalry between Abderrahman Samba and Karsten Warholm in the men’s 400m Hurdles will once again be renewed in Stockholm. Samba has gotten victory over Warholm in their last two duels, with the most recent coming on Warholm’s home ground, Oslo.

Can Warholm get the better of Samba in Stockholm? Well, it all depends on how the reigning World Champion maintains his stamina going into the home straight.

After picking up an impressive victory in Oslo where the women’s 100m Hurdles was a non-scoring event, Danielle Williams has a chance to build on that victory in Stockholm. However, the Jamaican will have the likes of Brianna McNeal and Christina Manning to contend with.

World Indoor medallist and 2011 World Champion, Jenny Simpson is the stand out athlete that will be competing in the women’s 1500m race. The race will also feature the likes of Nelly Jepkosgei of Kenya, Rababe Arafi of Morocco and Habitam Alemu of Ethiopia.

The Stockholm DL will also play host to a 1000m race in which points are up for grabs. The points will count towards the men’s 800m standings, and with leader Wycliffe Kinyamal absent, this is a chance for the chasing pack to rise up the standings. Adam Kszczot, Kipyegon Bett and 2016 Diamond Trophy winner Ferguson Cheruiyot Rotich are all going to run in what promises to be a fascinating race.

The men’s Pole vault should be the most intriguing Field event of the day as home boy, Armand Duplantis, hopes to stop World Champion Sam Kendricks on the day. With both vaulters already clearing 5.93m this season, Kendricks will be at the advantage as he is coming to Stockholm on the backdrop of three wins in Eugene, Rome and Hengelo.

Another youngster who will be hoping to upset the apple cart in Sweden is Cuban sensation, Juan Miguel Echevarria. The Long jumper came within 5cm of beating Luvo Manyonga in Rome. Although Echevarria beat Manyonga to GOLD at the World Indoors this year, it is the South African who has the upper hand as he would look to take his winning streak to seven outings.

In the women’s High jump, Mariya Lasitskene seeks to extend her dominance and should do so with ease, despite the presence of World Silver medallist Yuliya Levchenko.

Ivana Spanovic is looking to defend the Diamond Trophy she has held for the last two seasons, having leapt to victory in both 2016 and 2017. The Serbian faces a competitive field on Sunday, with the likes of Tianna Bartoletta, Christabel Nettey and Lorraine Ugen also lining up.

Finally, in the men’s Discus, Jamaican Fedrick Dacres will be looking to get back to wining ways after his poor showing in Oslo. Standing in his way will be Lithuania’s Andrius Gudzius who won last time in Oslo.