Having saved Nigeria’s blushes at the London 2012 and Rio 2016 Olympic Games, the country’s powerlifters once again came to the rescue of the nation at the ongoing Commonwealth Games in Gold Coast, Australia, as Roland Ezuruike claimed Nigeria’s first GOLD medal of the Games while competing in the men’s Para Powerlifting Lightweight event on Tuesday.

The Rio 2016 GOLD medallist inspired a 1-2 for Nigeria in his category where he successfully lifted 188kg and 194kg respectively, amassing a total of 224.3 points to dominate the event, thus improving on his Glasgow 2014 performance where he finished with a Silver medal in the in the men’s 72kg event.

World Record (WR) holder and reigning World Champion in the 65kg class, Paul Kehinde, who won GOLD in the men’s 72kg event four years ago in Glasgow, had to settle for Silver this time around with 219.9 points. England’s Ali Jawad won Bronze with a total of 182.7 points.

This brings Nigeria’s medal tally to four at the moment, including two Silver medals won in the men’s Table Tennis team event and men’s Shot put. 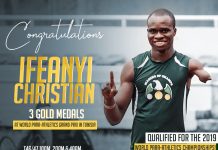 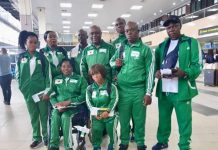 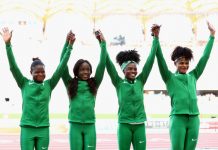