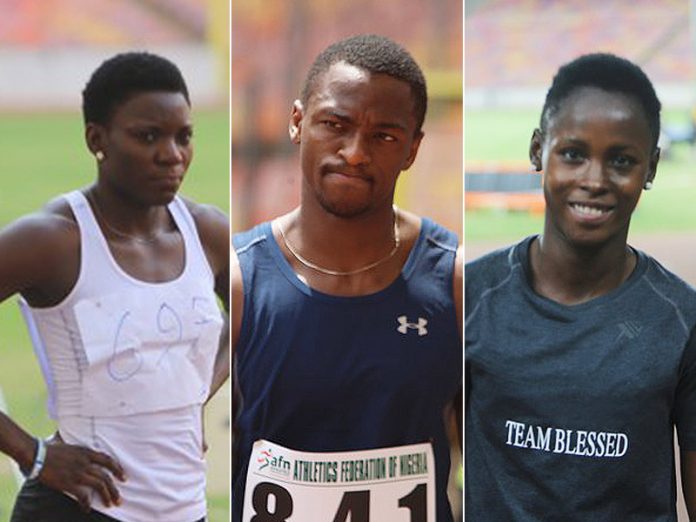 A number of athletes stole the spotlight on the second day of the Athletics Federation of Nigeria (AFN) Golden League, which was staged at the Abuja National Stadium between March 16th and 17th, 2018.

They include three-time Nigerian men’s Champion Seye Ogunlewe, and Team Blessed’s duo of Blessing Ogundiran and Yinka Ajayi, who pulled off upsets in their events – the women’s 100m and 400m respectively.

Having missed the final of the men’s 100m at last month’s Commonwealth Games Trials, Ogunlewe made a return at the Abuja Golden League which is only his second competition this season.

He raced in the heats where he won Heat 2 in 10.55s on Friday, before stepping up his game on Saturday to renew his rivalry with Ogho-Oghene Egwero in the final. The 26-year old gave a glimpse of what to expect this season as he outclassed the rest of the field with a Season’s Best (SB) of 10.23s, improving on his former SB of 10.31s to cement his status as the man to beat in Nigeria.

Egwero and Usheoritse Itsekiri followed in 10.30s and 10.47s respectively, while Emmanuel Arowolo settled for 4th in 10.48s. 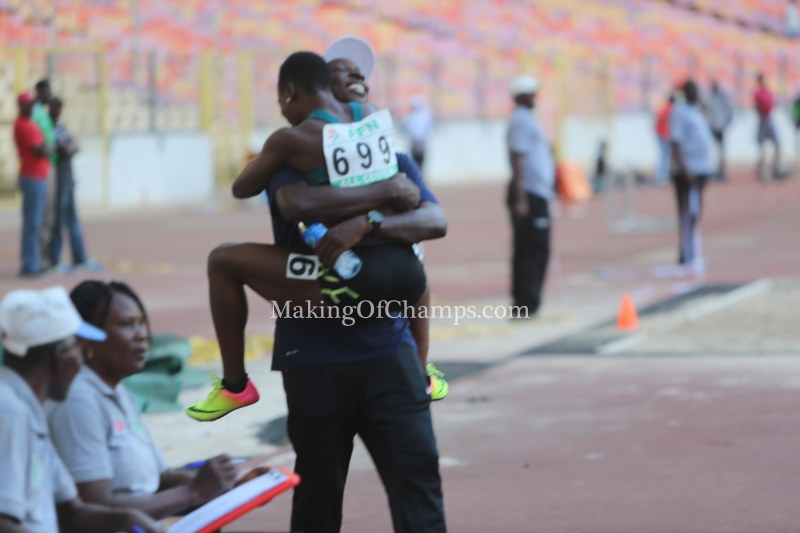 An excited Blessing Ogundiran leaps on her coach after winning the women’s 100m final with a Personal Best of 11.48s.An upset was recorded in the women’s 100m final as Blessing Ogundiran upstaged season-leader Isoken Igbinosun to clinch the victory in a Personal Best (PB) of 11.48s. Ogundiran had clocked the overall fastest time in the heats the day before, and she is certainly one to watch out for this season.

Following in 2nd place was Kids and Play’s Rosemary Chukwuma who returned a time of 11.62s, while Mercy Ntia-Obong stormed to an SB of 11.64s in 3rd place. Igbinosun finished a distant 4th, her lowest placing in a long while no doubt.

Another upset ocurred in the women’s 400m final where Yinka Ajayi was spurred on to a PB of 51.22s enroute her first ever victory over three-time National Champion Patience Okon-George who returned a time of 51.82s in 2nd place. Ajayi’s former PB of 51.30s was set in Ozoro last year.

Not only did she win the race, Ajayi went on to inspire some of her rivals to PBs as well. Glory Nathaniel who had won the women’s 400m Hurdles earlier in the day with a time of 56.14s, finished 3rd in the 400m with a PB of 52.08s, while Praise Idamadudu who had clocked a lifetime best of 52.84s the previous day, improved her mark to 52.49s in 4th place.

Grace Ayemoba continued her dominance in the 100m Hurdles where she took the win in 13.56s, while Bashiru Abdullahi was the man to beat in the 110m Hurdles as he outran the duo of Samuel Osadolor and Samuel Okon to take the race in 14.28s.

Theddus Okpara leapt to an SB of 7.70m to win the men’s long jump, as Eke Kalu Onwuka won the Shot put with a distance of 17.90m; Leticia Chime claimed victory in the women’s Shot put with a throw of 15.95m. National Champion in the men’s Javelin, Samuel Adams won his event with a mark of 72.22m. 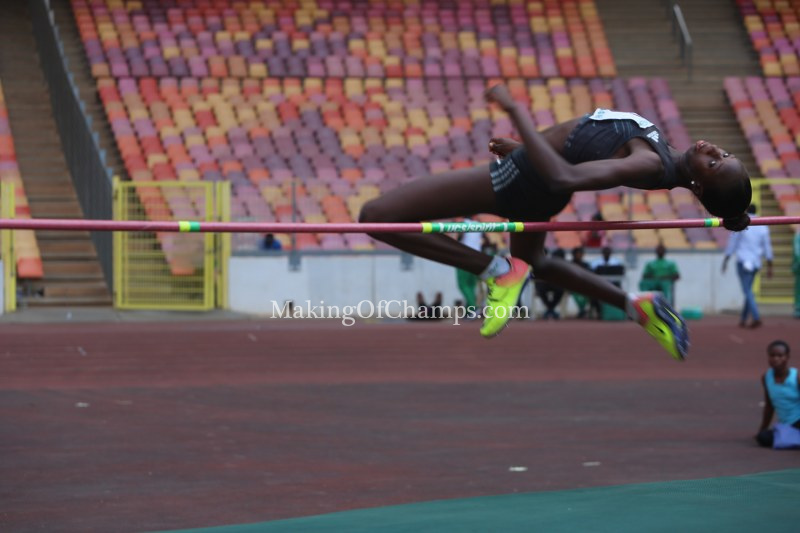