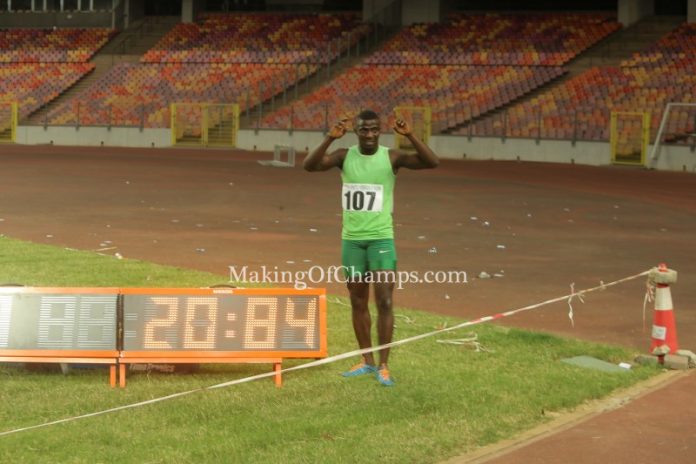 The men’s 200m final was the last event on Day 1 of the ongoing Athletics Federation of Nigeria (AFN) Golden League holding at the Abuja National Stadium. However, it turned out to be the highlight of the day as reigning National 200m Champion Emmanuel Arowolo smashed his Personal Best (PB) set while winning the final at the Commonwealth Games Trials (20.96s).

It was evident from the way he attacked the curve and the home straight while competing in Heat 1 of the 200m on Friday, that Arowolo was a man on a mission, and that he was running for time. The fans at the stadium erupted in cheers and applause as the clock stopped at 20.84s, before it was rounded up to 20.85s.

Speaking with Making of Champions after the race, Arowolo disclosed that his plan for this year is to run faster in every race he competes in. He said:

“I want to thank God because it hasn’t been easy. I also want to thank the Sports Ministry for giving me this opportunity to be in camp with the national athletes going for the Commonwealth Games. It has been a privilege training with some of these great athletes. I want to thank my coaches who have really tried to improve on my form and endurance also. I’m really happy about this time this evening.

“I changed the plan towards this race. I didn’t come with my normal running strategy. I said ‘let me just change the whole rule of the game this evening’ and it actually paid off. I came into 2018 with the target of beating my PB in every race; that’s the plan.”

In other events, Egwero ran the overall fastest time in the men’s 100m heats, returning a time of 10.40s. Reigning National Champion Seye Ogunlewe clocked 10.55s to win Heat 2 while Idjesa Uruemu raced to victory in Heat 1 in a time of 10.64s. Arowolo was the man to beat in Heat 4 where he posted a time of 10.57s.

In the women’s 400m, Folashade Abugan qualified for Saturday’s final after winning Heat 1 in 53.81s, while Yinka Ajayi raced to an SB of 52.24s in Heat 2 to finish ahead of MoC’s Ifunanya Muoghalu. Praise Idamadudu clocked a PB of 52.84s in Heat 3, while Oluchi Offorma who placed 2nd in the race, also qualified for the final with her time of 55.57s.

Henry Okorie of Nigeria Customs extended his winning streak this season by claiming victory in the men’s 400m Hurdles in 52.40s. However, his closest challenger David Olowookere clipped on a hurdle and fell, and Did Not Finish (DNF) the race. Timothy Emoghene and Edidiong Udoh placed 2nd and 3rd respectively.

National Record holder Queen Obisesan maintained her impressive run this season, winning the women’s Hammer throw with a distance of 66.15m, while Precious Okoronkwo won the women’s Long Jump with her leap of 6.16m.