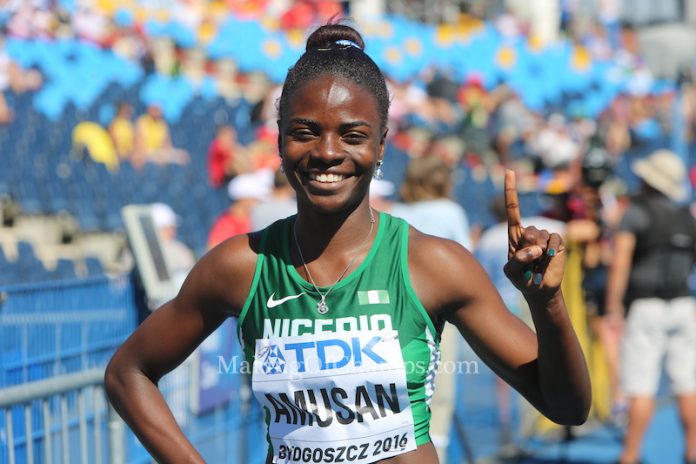 Nigeria’s Tobi Amusan was the athlete that came closest to getting a medal for the country at the ongoing IAAF World Indoor Championships taking place in Birmingham, United Kingdom.

However, the 2015 African Games Champion settled for a 7th place finish in the final of the women’s 60m Hurdles, clocking a time of 8.05s.

Amusan, who is competing at her very first World Indoor Championships, had earlier in the day come within two-hundredths of a second to her Personal Best (PB) in the semis after posting a time of 7.91s.

The women’s 60m Hurdles was won by World Record Holder over the 100m Hurdles, USA’s Kendra Harrison who raced to a time of 7.70s, which also is a Championship Record (CR), as Christina Manning (7.79s)  and Nadine Visser (7.89s) of the Netherlands came through the finish line in 2nd and 3rd respectively.

Amusan’s compatriot, Lindsay Lindley didn’t make it into the final after placing 5th in the second semis of the event. Lindley, who is also making her debut in the competition, clocked a time of 8.08s, which was an improvement on the 8.18s she posted in the heats.

Another Nigerian athlete who competed on the day was Chukwuebuka Enekwechi. The Shot putter who is representing Nigeria for the second time at a major Athletics competition, placed 14th in the overall standings after throwing a best mark of 19.78m.

Like Patience Okon-George, Nigeria’s women’s 4x400m team who were initially scheduled to run in Heat 1 earlier today Did Not Start (DNS) their race.

The last time Nigeria won a medal at the World Indoors was exactly 10 years ago when African Record holder in the men’s 100m, Olusoji Fasuba struck GOLD in the men’s 60m in Valencia.