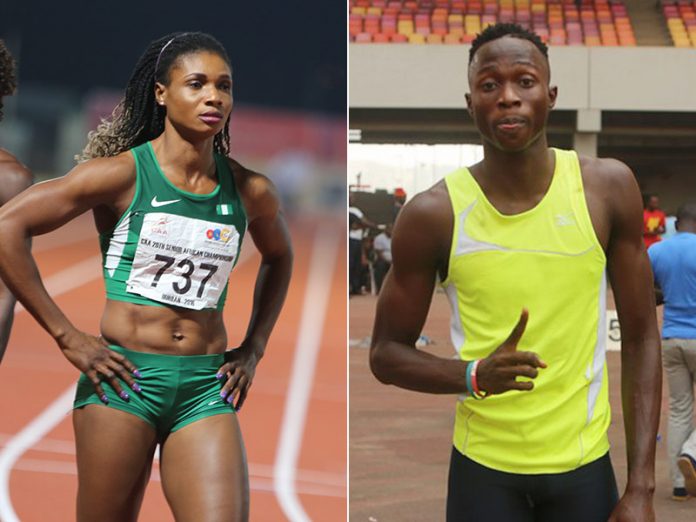 Not often do we see two Nigerian athletes top the world rankings in their events. However, for almost two weeks now, both Emmanuel Bamidele and Patience Okon-George have been at the apex of the 400m in their respective categories.

Going by their performances at the Port Harcourt Golden League, both athletes were deservedly marked as favourites in their events going into the Nigerian Commonwealth Games Trials and they justified that tag, putting up spectacular showings to emerge winners in Abuja.

Bamidele laid down the marker, going under 46s for the first time in his career, winning his 400m semis with a then Personal Best (PB) of 45.85s. However, it was in the final that Bamidele raised the roof, storming to a lifetime best of 45.28s to win the race, which is also a World Lead.

In the build up to the Trials, Bamidele maintained a winning streak that saw him record three victories and having three of the six fastest times in our Top List before the competition. He went on to cement his lead, improving on his previous times from Kaduna and Port Harcourt.

Although he finished 2nd in that race with a Season’s Best (SB) of 46.40s, Orukpe Erayokan is still 3rd on our Top List behind Samson Nathaniel who despite finishing 4th, is still ranked 2nd on the log, with his SB of 46.54,s which he ran in Port Harcourt.

Isah Salihu who finished 3rd with an SB of 46.54s, leapfrogged Daniel Atinaya who was formerly 4th on the ranking.

Going by the news making the rounds since the Commonwealth Trials, Nigeria is set to miss out on the services of Bamidele who currently holds three of the Top 10 fastest times in the world this year.

There are reports that Bamidele who is yet to represent Nigeria any level, will now be donning the colours of the oil-rich, Qatar, just when it seemed that another quarter-miler in the mould of Innocent Egbunike or the late Sunday Bada had been unearthed.

Meanwhile in the women’s 400m, Okon George not only built on her previous SB of 51.94s, she improved on it with a World Leading mark of 51.40s. The closest person in the world to Okon-George is South Africa’s Caster Semenya who is currently ranked at No.2 with an SB of 51.84s.

Okon-George was imperious in the race, winning by over a second as Yinka Ajayi who placed 2nd, ran an SB of 52.49s. Praise Idamadudu who ran the race of her life from Lane 1, finished 3rd with a PB of 52.92s.

Although the top two places remained unchanged with Okon George and Ajayi maintaining their positions in our Top Lists, Idamadudu was the biggest mover, climbing up five places from 8th to now rank 3rd.

Yes it might still be very early in the season and they would most likely lose that top spot later on, but for now let’s bask in the euphoria that Bamidele and Okon George are currently the world leaders in the 400m respectively.

Click here to read on the new leaders in the 100m and 200m respectively.