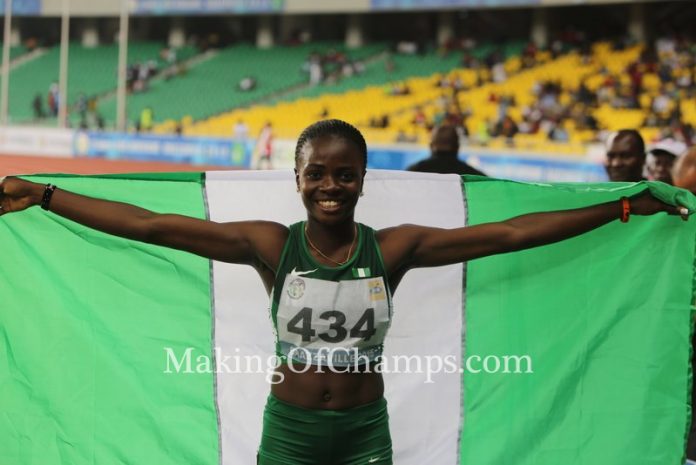 A total of nine athletes are expected to don the green and white colours of Nigeria at the IAAF World Indoor Championships billed to hold from March 1st to 4th in Birmingham, according to the provisional entry list released by the IAAF on Sunday.

The nine athletes comprise of seven female and two male athletes. US-based Chukwuebuka Enekwechi will compete in the men’s Shot put event, and comes with a Season’s Best (SB) of 20.89m, which puts him on 12th position on the world rankings.

Another US-based athlete Chidi Okezie, who is an African Championships Bronze medallist in the men’s 400m, will compete in his specialist event where he has clocked an SB of 46.58s. Okezie who competed in Portland two years ago, will be thrilled at his return to the national team.

Topping the list of female athletes is Oluwatobiloba Amusan who will be in action in the 60m Hurdles, having set a Personal Best (PB) and SB of 7.89s set earlier this season. She is ranked 8th in the world at the moment, and will be joined in the event by 2015 African Games 100m Hurdles Bronze medallist – Lindsay Lindley, who raced to a PB/SB of 8.04s last week.

Three-time Nigerian Champion in the women’s 400m, Patience Okon-George will be the country’s sole representative in her event. The African Championships Bronze medallist set an SB of 51.40s to win the Commonwealth Games Trials, and is ranked No.1 in the world (outdoor) in 2018.

She will also play a vital role in the women’s 4x400m, and compatriots Regina George, Glory Nathaniel, Yinka Ajayi and Emerald Egwim will be counting on her wealth of experience when the relays get underway. The trio of Ajayi, Nathaniel and Egwim made their World (outdoor) Championships debut in London last year, and will be hoping to make an impact at their first outing at the World Indoors.