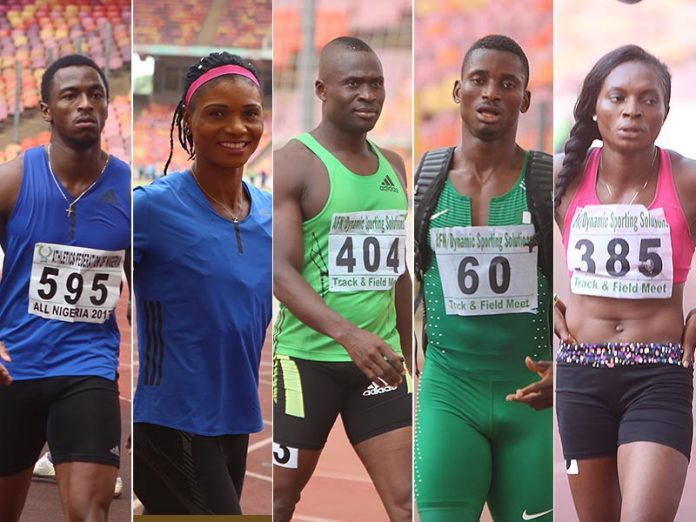 The race to make the Nigerian team to the forthcoming Commonwealth Games billed to hold in Gold Coast, Australia, is set to begin on Wednesday, February 14th, at the National Trials holding at the National Stadium in Abuja.

The three-day competition will see top athletes from around the country, engaged in a battle of superiority over who makes the team to the Games holding from April 4th to 15th, 2018.

One of the top names headlining the competition is Nigeria’s reigning men’s 100m Champion Seye Ogunlewe, who would officially open his 2018 season in Abuja. Many would be waiting to see what the three-time champion has up his sleeves, having been away from the scene for some time. It remains to be seen if he will compete in his trademark event -the 100m, or the 200m.

It would be great though to see him rekindle his rivalry with familiar foes such as former champion Ogho-Oghene Egwero who tops the men’s 100m standings with 10.37s, which he secured at the Commonwealth Games Camping Trials held in December, and Obinna Metu who is ranked 4th with 10.51s. It would also be interesting to see how younger athletes like Usheoritse Itshekiri (10.44s) and Jerry Jakpa (10.49s) fare while running against the country’s fastest man.

Isoken Igbinosun will be hoping to consolidate on her performance thus far this season but will be hoping to better her time when the women’s 100m gets underway. Currently topping the list with 11.48s, a faster time will likely see her book her spot to Gold Coast. She must however surmount the challenge that will be posed by the likes of Blessing Ogundiran (11.54s), Rosemary Chukwuma (11.74s) and Mercy Ntia-Obong who won the event in Port Harcourt two weeks ago.

Men’s 400m Champion Samson Nathaniel will no doubt be hoping to get one over the in-form Bamidele Emmanuel who has dominated the event all through this season, and even went as far as upstaging Nathaniel in Port Harcourt. That was the first meeting of the pair this season, which saw Emmanuel lowering his Personal Best (PB) to 46.11s. The lanky sprinter will be hoping to break 46s when action commences in Abuja.

Patience Okon George holds the two fastest times in Nigeria this season (51.94s and 52.38s), and will definitely be the woman to beat in the 400m. London 2017 semi-finalist Yinka Ajayi who is joint-second with fellow Team Blessed teammate Glory Nathaniel with a time of 53.16s, will aspire to run below 53s for the first time this season to secure her spot in Australia.

Men’s 200m Champion Emmanuel Arowolo who is ranked 5th on the top list with his time of 21.53s, will be aiming to extend his dominance from Port Harcourt when he goes against the likes of event leader Jerry Jakpa (21.28s), Chukwudi Olisakwe (21.50s) and former National Champion Tega Odele.

Going by the duel engaged in by the pair of National Champion Kalu Onwuka and Austine Nwoye in the men’s Shot put event in Port Harcourt, leading to both throwers setting PBs of 17.90m and 17.30m respectively, there is the anticipation of some fireworks in the event in Abuja.

Having set a National Record (NR) of 65.01m in the women’s Hammer throw, making her the standout performer at the Port Harcourt Golden League, stiffer competition at the Commonwealth Games Trials may inspire Queen Obisesan to better her NR in a bid to secure her spot on the Nigerian team to Gold Coast.