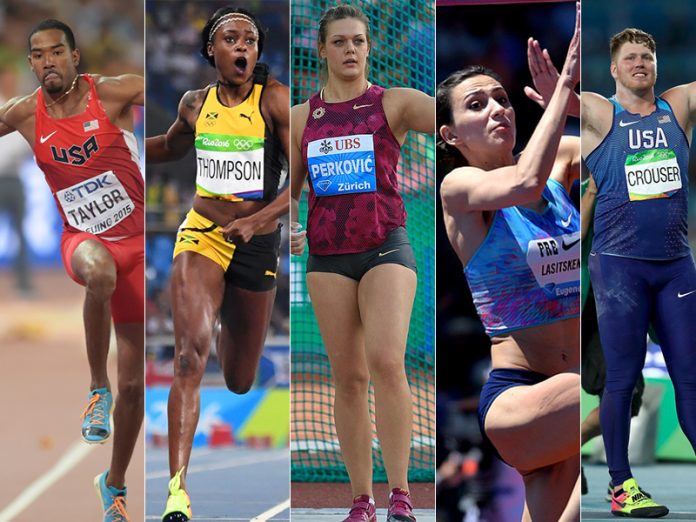 After a frantic finale in the first of two IAAF Diamond League finals which took place in Zurich last week, the Memorial Van Damme Meeting in Brussels will reveal the athletes that will cart away the remaining 16 Diamond Trophies on parade.

With new rules coming into effect this season, the Top 8 athletes who have accumulated the highest number of points in the first 12 Diamond League meetings of the season will battle it out for the top prize of $50,000.

The final IAAF Diamond League event of 2017 will take place at the King Baudouin Stadium in Brussels on Friday, September 1st.

Going into the 100m final, Jamaica’s Elaine Thompson will be looking to put behind her the debacle of losing a race she thought she already had at the IAAF World Championships – a race that saw her finish 5th in the 100m final.

The Olympic Champion has had a stellar 100m season in the Diamond League, having won all but one of the qualifying meets.

Meanwhile, World double Silver medallist, Marie-Josée Ta Lou will hope to get her hands on the Diamond trophy after playing second fiddle in majority of her 100m races this season.

Nigeria’s Blessing Okagbare-Ighoteguonor will also be in the mix. The 2014 Commonwealth Champion who has cut a consistent figure in the Diamond League this season –accumulating 22 points in the 100m, goes into the final race with a high morale after claiming victory at the IAAF World Challenge meet a few days back in Zagreb.

Bahamian Shaunae Miller-Uibo who is coming on the back of causing a huge upset in the women’s 200m final race in Zurich, would be looking to replicate such a performance in the 400m – an event she dominated up until the World championships.

After stumbling on the home straight in the 400m finals earlier this month, the Olympic Champion will be aiming to make amends.

However, her biggest threat this time around will come in the form of 19-year old precocious talent, Salwa Eid-Naser. The Nigerian-born Bahraini athlete surprised all and sundry by winning Silver in London, before also claiming victory at the 12th leg of the Diamond League series in Birmingham.

In the women’s 400m Hurdles, Olympic Champion and world Silver medallist, Dalilah Muhammad will once again go against 2013 and 2015 World Champion Zuzana Hejnova.

Ameer Webb of the United States is the one to watch in the 200m. The American has been in imperious form in the Diamond League this season, gathering a massive 38 points in all his six races.

He however, will face stiff competition from Turkey’s Ramil Guliyev who earned a surprise victory over Wayde Van Niekerk in London. World Junior Champion Noah Lyles of the US will also have a say in the outcome after storming to victory in Shanghai with a then World Leading time of 19.90s.

After finally claiming her first world title, Olympic Champion Faith Kipyegon will be the overwhelming favourite heading into the women’s 1500m finals, although Dutch lady Sifan Hassan, who is the fastest in the world this year at 3:56.14, and World Silver medallist Jenny Simpson of the US, should do enough to push her to the limit.

Botswana’s Nijel Amos will be looking to end the season on a high after finishing outside the podium at the World Championships. The London 2012 Silver medallist, however, has a chance at redemption in Brussels. His chances are even made better by the absence of London 2017 GOLD medallist Pierre Ambroise Bosse.

In the men’s 3000m Steeplechase, Soufiane Elbakkali will be looking to upset the apple cart heading into the final. Nevertheless, the Moroccan, who is the Diamond League leader, will face stiff competition from Kenya’s Olympic and World Champion Conseslus Kipruto, who despite running with an ankle injury, won the event in London.

With Sifan Hassan opting to run the 1500m, Kenya’s World 5000m champion Hellen Obiri is the clear favorite in the women’s 5000m.

There will be renewed hostilities going into the women’s Long Jump final as the Top 3 from the World Championships will be in contention for the Diamond Trophy.

Olympic Champion Tianna Bartoletta, World Champion Brittney Reese, and Darya Klishina, who is competing as a Neutral Athlete, will all trade jumps once again.

Nonetheless, Last year’s Diamond League winner Ivana Spanovic, who narrowly missed out on a medal in London, will be hoping to spoil the party for the trio.

Women’s High Jump World Champion Mariya Lasitskene looks set to win a second Diamond trophy. The 24-year old has been in impeccable form as she has won all six qualifying Diamond League meetings.

Similarly, in the women’s Pole Vault, Ekaterini Stefanidi will look to stamp her authority in the event she won last year.

While coming off the back of claiming the world title in London, the Greek lady cannot afford to be complacent as the field also contains Diamond League leader Yarisley Silva of Cuba, and USA’s Sandi Morris – the only lady that has achieved a 5.00m vault other than Russia’s retired WR holder Yelena Isinbayeva.

In the same vein, Croatia’s 2012 and 2016 Olympic Discus Champion  Sandra Perkovic will look to add to her collection of Diamond Trophies. However, the duo of Cuba’s Yaime Perez and Australia’s Dani Stevens who have both thrown beyond the 69m mark, should have a say in the final outcome.

The men’s category of the Discus will see the duo of Daniel Stahl of Sweden, who heads this year’s world list with a Personal Best (PB) of 71.29, and Lithuania’s Andrius Gudzius, lock horns once again. The presence of Jamaica’s Fedrick Dacres and the German duo of Robert and Christoph Harting  also spices things up in the final.

Also, Olympic and World Champion Christian Taylor, who has walked over every competition in the Triple Jump in recent years, will come up against his compatriot Will Claye. Taylor, who remains the only athlete to have jumped beyond the 18m mark this season, will also have Cuba’s Pedro Pablo Pichardo to battle against.

Finally, US Olympic Shot put Champion and Diamond League leader Ryan Crouser, who has a PB of 22.65m, will aim to make amends for his poor showing in London. He will however have New Zealand’s Tom Walsh who claimed GOLD then, and his US rival Joe Kovacs to contend with.