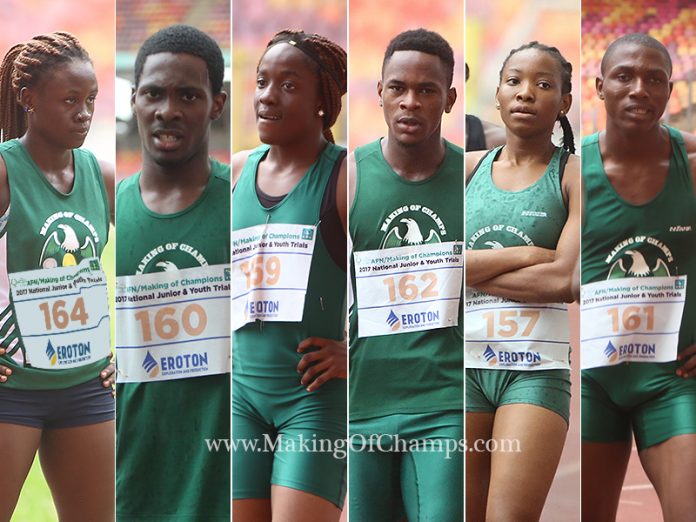 Making of Champions’ (MoC) athletes had a National Under 20 & 18 Championships to savour, with as many as six of them winning medals in their respective events at the annual meet.

For most of them, this is the first time they would be competing in a National competition of that magnitude, and being able to win medals on their first bow was just the perfect icing to cap off a fine outing at the Abuja Stadium.

After announcing herself as major athlete to reckon with in Nigeria clocking a Personal Best (PB) of 11.65s at the AFN/Dynamic Sporting Solutions meet two weeks ago, Arco-Group sponsored Joy Udo Gabriel will no longer be considered a rookie as she came agonizingly close to being a National Junior champion.

Udo Gabriel clearly led the more established Aniekeme Alphonsus in the first 50m of the women’s 100m final and looked like she was destined for the win, but she starting dipping early as she approached the finish line, giving the more experienced defending champion an opportunity to sneak in and retain her title.

To explain how close the race was, Aniekeme secured victory in 11.74s, with Udo Gabriel settling for 2nd after crossing the line in 11.75s and Blessing Ogundiran 3rd in 12.13s.

It was the way it ended in the women’s 200m final, with Aniekeme racing to victory, and Udo Gabriel settled for Silver, her second of the day. For Udo Gabriel, it was a learning experience having twice come close to winning two very competitive races in a space of two weeks.

Last year she was invited to her first National Senior Championships in Sapele, and have grown in leaps and bound since then. With the kind of form she has shown recently, it looks like she might have just earned herself another ticket to the 2017 National trials.

While in the men’s 100m final, Arco-group sponsored Jeremiah Jakpa had to cover a lot of ground to finish on the podium. Then Jakpa chased his other competitors as he tried to catch up, finishing 3rd in 10.81s, with Itsekiri Usheoritse beating the defending champion Raymond Ekevwo in 10.60s, and the latter finishing 2nd in 10.71s.

Despite not being at 100% and struggling with an injury, Shell sponsored Chiamaka Egbochinam did just enough to secure a place on the podium after finishing 3rd in the Youth Girls 100m to secure Bronze in 12.24s, with Rosemary Chukwuma taking the win in 12.08s ahead of her teammate Hope Joshua who was 2nd in 12.22s.

It is the second national medal won by Egbochinam, having gotten Bronze last year in Ilorin at the National Youth Games with a Personal Best 12.08s.

In the men’s 200m, University of Port Harcourt student Esereoghene Oguma made sure he was in touch with others, coming from lane 1 to win Bronze in 22.21s. With Jakpa withdrawing having comfortably won his 200m heat beating Adewale Sikiru, Oguma made sure the club got a podium placement as he surged through behind Prosper Ogbonna who won in 21.21s and Itsekiri Usheoritse 2nd in 21.64s.

For some of the MoC athletes, they have been in club for less than six months and have displayed the kind potentials that made the club invest in them. Following their success story in Abuja, it now looks like a matter of time before Nigerian Athletics takes a new turn for good.

Thanks to Eroton E & P (http://www.erotonep.com) the Lead Sponsor of the 2017 AFN/Making Of Champions National U18 & U20 Championships in Abuja for making it happen!