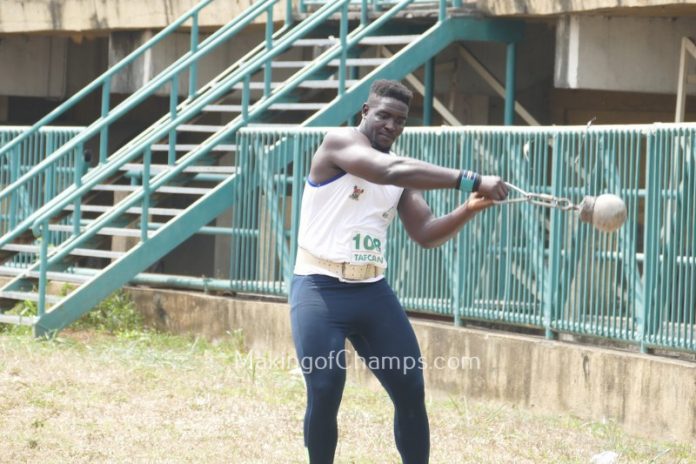 This is the second meeting organized by the Lagos Chapter of the association in 2017, following on the heels of the first leg held in January, which was dominated by MoC athletes.

The athletes competed in over-distant events such as the 250m and 450m, 1 Mile, 4x400m (Men) and 4x100m Mixed Relays. The throwers were not left out as they competed in the Shot put (Men) and Hammer events.

Durban 2016 Silver medallist Ajayi was the woman to beat in the 250m and 450m events. She ran the fastest times overall in both events, taking the win first in the longer race where she clocked a time of 1:02.9. Making of Champions’ (MoC) Blessing Obarierhu followed in 1:07.4, as Abimbola Junaid placed 3rd with a time of 1:08.3.

The men’s event was keenly competed in across four heats. Heat 1 was dominated by Atanda Akindele of Team Blessed, who clocked a time of 55.7s to finish ahead of Ismail Muhammed (58.0s) and Segun Akhigbe (59.8s). Segun Ogunkole easily won Heat 2 in 59.3s.

2016 Skoolimpics standout athlete Anita Taviore won Heat 3 in 32.6s to finish ahead of Perpetual Dikeochai (33.5s). Blessing Ogundiran was the woman to beat in Heat 4 where she finished ahead of Esther Isa (34.2s) in 32.7s. Victoria Oyebude took Heat 5 in 34.8s.

The 1 Mile was won by Keji Ogunyemi in 4:45.5, with Moses Edatanlen coming a close 2nd in 4:47.7, while Oluwadamilare Daodu finished in 3rd place.

The mixed relays added some colour and excitement to the competition, and Blessing Ogundiran anchored Eaglesight to victory in a time of 44.5. MoC’s quartet of Udo-Gabriel, Ogochukwu, Edwin and Badejo followed in 2nd place in 45.0s, as Esteem Team B placed 3rd in 47.2s.