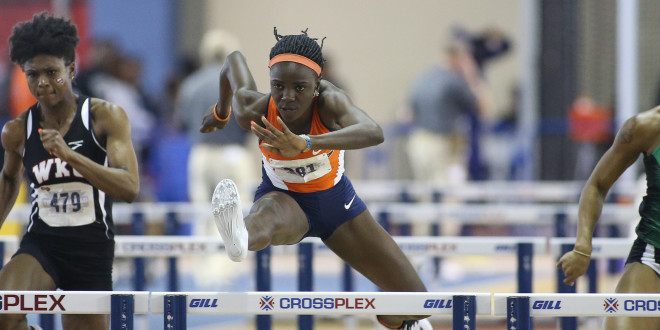 African Games 100m Hurdles Champion, Tobi Amusan has proven that the 2017 Athletics season is set to be her best career season till date, as the sprints sensation has smashed her Personal Bests (PB) on several occasions, while also breaking several records since the beginning

around, the UTEP sophomore smashed her 60m Hurdles PB by 0.10s to clock a new one of 7.98s in the semis at the Don Kirby Invitational

in Albuquerque, New Mexico on Saturday, February 11th. The time

is currently the third-fastest in the US, and ties the University of Texas El Paso (UTEP) school record set by Janice Jackson in 2014.

Unfortunately, it wasn’t all smooth sailing for the hurdler in the final, as she had to come from behind to close the gap to Oregon’s Sasha Wallace for a photo finish, with both hurdlers setting the same time of 7.99s. However, it was Wallace who got the win by just a thousand of a second (7.986 to 7.987), while Amusan settled for 2nd.

The Rio Olympian will now set her eyes on defending her C-USA 60m Hurdles title in a week’s time, while she may also decide

to compete in the 200m, having recently broken the school record held by Blessing Okagbare, clocking a PB of 23.38s.

Other UTEP Nigerian athletes that competed at the invitational were Florence Uwakwe who clocked 7.59s to finish 14th overall in the 60m, and Yinka Oyebanjo-Odofin who raced to a Season’s Best (SB) of 51.60s in the 400m.