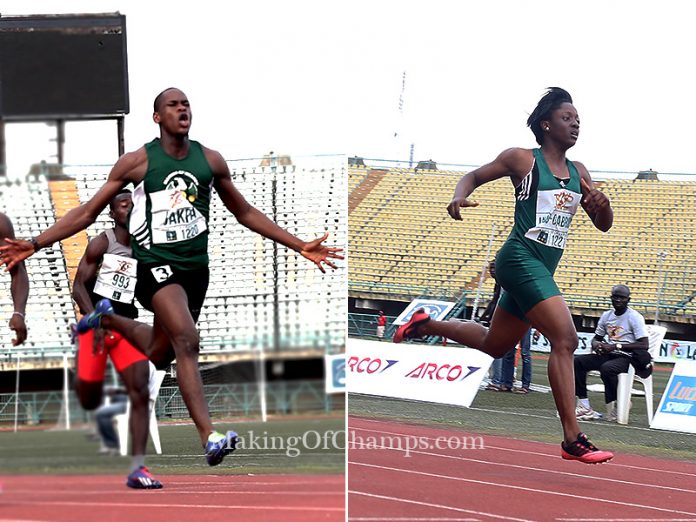 Making of Champions duo: Jeremiah Jakpa and Joy Udo-Gabriel further underlined their status as the next rated athletes in Nigeria, storming to a double on Day 2 of Top Sprinter 2016 at the Teslim Balogun Stadium, Lagos.

Both Jakpa and Udo-Gabriel won the Junior 100m titles on Day 1, going on to replicate the same feat in the 200m with wins in their respective races on Friday.

For Jakpa who moved to Lagos to train with the MoC track club, he would be happy with his development after clocking a Personal Best of 21.79s in the heats and going on to win the final with a time of 21.97s.

Jakpa ran very well in the two 200m races he executed, dominating in both and was the deserving winner. Interestingly, this is the first time in Jakpa’s career that he will be going under 22s in the 200m.

In the 200m Junior Girls final, Udo-Gabriel followed in the paths of Jakpa, clinching the title with a time of 25.19s. Udo-Gabriel was visibly exhausted after her heat which she won in 25.21s, but she was not fazed by her weariness as she held on strongly on each occassion to win.

Udo-Gabriel came under pressure from her fellow MoC Track club teammate, Ifunnaya Muoghalu who pushed and challenged for the win. Muoghalu settled for 2nd in 25.42s with Ruby Lawani 3rd in 26.33s.

Jakpa and Udo-Gabriel would be happy that they lived up to expectation, justifying why they were installed as the poster athletes in the Junior category for this year’s competition.

In the 400m Junior Boys final, Okokon won the race after coming from a losing position to dip in and win with a time of 49.92s. Lateef Oluwabunmi placed 2nd in 50.10s with Segun Akhigbe 3rd in 50.12s.

Field Events:
There were some field events on Day 2, making it the first time on any Top Sprinter competition such will be happening.

Meanwhile in the Junior Girls High Jump, Esther Isa further displayed the talents that she has, winning the title after scaling a height of 1.75m. Temitope Adesina finished 2nd with a clearance of 1.65m, and Jennifer Eze 3rd with 1.50m

In the Junior Boys Shot Put, Isaac Odugbesan was too good for his other competitors, throwing a distance of 17.10m to take the win. Michael Ikechukwu finished 2nd throwing 9.30m, while Oluwatosin Tajudeen placed 3rd with a mark of 8.50m