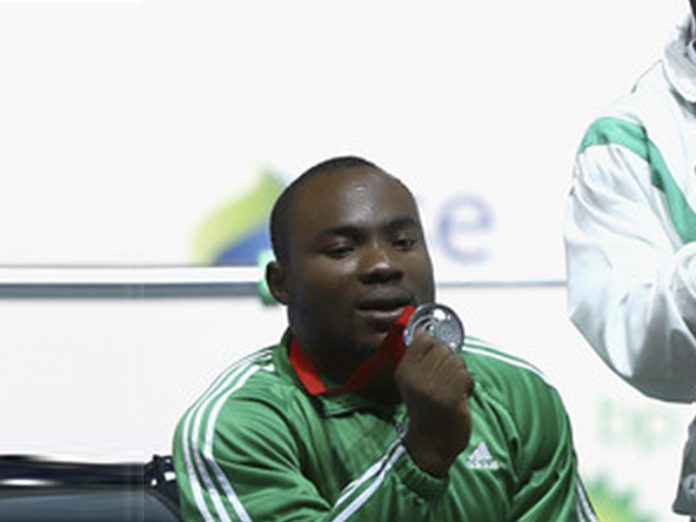 The medal rush began for Nigeria on Day 2 of the ongoing Paralympic Games in Rio as Roland Ezuruike struck GOLD in the -54kg of the men’s Powerlifting event in Brazil, setting three Paralympic Records (PR) enroute his victory on Friday.

The 40-year old who won Silver in the 78kg class at the 2014 Commonwealth Games, was no match for the rest of the field, totally outclassing them with each lift. Incidentally, Ezuruike was listed last in the lineup of 11 lifters, but that didn’t stop him from dominating the field.

Ezuruike made a successful first attempt at 185.0kg, a PR which would have won him GOLD had he failed in his subsequent attempts. However he extended his lead and PR to 190.0kg on his second attempt, before erasing his earlier efforts on his third, setting another PR of 200.0kg.

Not satisfied with this feat, the Nigerian made an attempt at the current World Record (WR) of 205kg and requested for the weights to be set at 205.5kg outside of the competition which had ended after his third lift. However it was not to be, as he failed to make a clean lift.

That notwithstanding, this is certainly a remarkable debut Paralympics outing for Ezuruike who toed the line of Latifat Tijani who won Silver earlier in the day in the women’s-45kg, securing Nigeria’s first medal at the competition.

China’s Jian Wang was 2nd with 170kg, while Dimitrios Bakochristos won Bronze with his lift of 162kg.

London 2012 GOLD medallist, Yakubu Adesokan who had been tipped to win the -49kg event on Thursday did not start, while Nsini Ben finished 7th in the women’s -41kg.

It will be recalled that Nigeria won a whooping 12 medals from Powerlifting alone at the London 2012 Games.