After off pitch problems which saw Nigeria’s under 23 Dream Team arrive Brazil just six hours to their first game in Manaus, they showed what they were capable of doing on the field as they beat Japan 5-4 to win their first match of Rio 2016 Olympics
.
Both Sadiq Umar and Oghenekaro Etebo were outstanding as they superbly combined in attack to lift Nigeria to victory, with the latter scoring four goals which played a huge role in them winning the game.

It was an enthralling opening 12 minutes that witnessed four goals, two apiece at either post, with Nigeria twice taking the lead and Japan clawing their way back to level 2-2.

If there were fears about Dream team are fatigued following their arduous journey, such was temporarily suspended when Sadiq Umar latched on to a rebound from Imoh Ezekiel’s shot to give Nigeria the lead after five minutes.

However, a minute later Japan drew level after Takumi Minamino was adjudged to have been fouled by Stanley Amuzie with the referee awarding a penalty and Shinzo Koroki stepping up to convert and make it 1-1.

It didn’t take long for Nigeria to regain the lead through Etebo who chested down a cross and volleyed in with his left foot. If you thought that was Nigeria going to consolidate, they let the lead slip as Japan yet again drew level with the Dream Team’s defence carved open with a through ball that saw Minamino slotting through Daniel’s legs.

All in twelve minutes and the Nigerian team was rattled, but they calmed things down and somehow found the lead again before half time. Yet again Umar showed some great work down the right cutting back for Etebo who’s first time shot was miscued and luckily rebounded for him to hit and make the scores 3-2.

The Nigerians had a lease of life when Umar yet again, took on two players and won a penalty just after the restart. Etebo stepped up and netted his third of the game, further adding a fourth when Masatoshi Kushibiki’s (Japan’s goalkeeper) poor clearance gifted the former Warri Wolves player a chance and he made no mistakes to score Nigeria’s fifth of the game.

Japan sensed a weariness in Nigeria’s defence as they threw on attacking substitutions, which paid off. Newly bought Arsenal striker Takuma Asano side-footed a cutback for 5-3, with Yuya Kubo Suzuki curling in a left-footed shot to make it 5-4 in stoppage time, but it was too late as Nigeria held on for the win.

The Dream Team might have gotten off from the ripple effect of arriving late for a competition, no doubt they will now have a deserved rest before their next game against Sweden, having just arrived the Manaus airport hours before the game against Japan.

Did you know: By the time Etebo got all his goals, he has had five shots, four were on target and they all beat the Japanese goalkeeper? 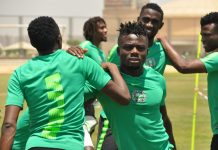