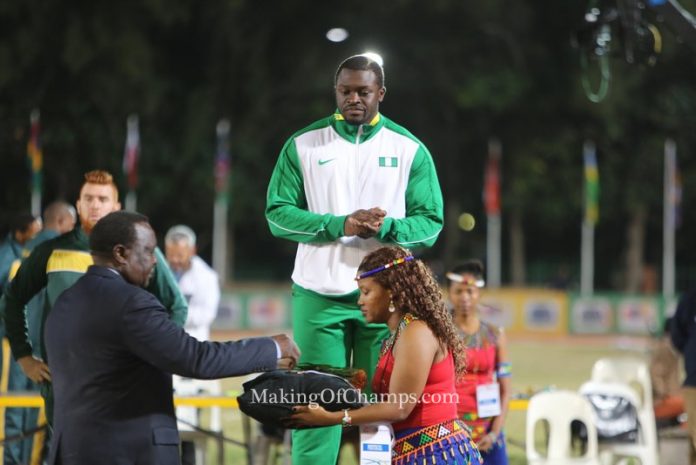 Stephen Mozia has won yet another medal, and after Day 2 he now accounts for the two medals won so far by Team Nigeria at the ongoing 2016 African Championships in Durban, South Africa.

Mozia will be delighted leaving the competition with two medals and would hope for a better outing at the 2016 Rio Olympics.

Six athletes competed for Nigeria in both the men and women’s 400m, with Patience Okon George and Regina George having a 1-2 finish in Heat 1, running 52.42s and 52.89s respectively to progress to the final on Friday. Yinka Ajayi finished 6th in Heat 2 with a time of 53.54s.

While in the men’s 400m semifinal, Chidi Okezie qualified for the final after finishing 2nd in Heat 2 clocking 45.80s behind Baboloki Thebe who narrowly beat him to 1st place in 45.75s. Tubotein Taylor finished 5th in Heat 1 with a time of 47.00s, and Orukpe Erayokan finishing 4th in Heat 3 in 46.84s.

Meanwhile in the men’s 400m Hurdles, Miles Ukaoma went through to the final after finishing 4th in Heat 2 as one of the fastest losers in 50.79s.