Making of Champions caught up with all five of Team Nigeria’s Relay Teams immediately after their races at the just concluded 2015 World Relay Championships in the Bahamas. Here are those interviews – enjoy them!

Nigeria’s 4x100m women after the finals of their race at the Bahamas 2015 World Relays. The quartet of Gloria Asumnu, Blessing Okagbare, Dominique Duncan and Peace Uko finished 7th in a Season’s Best 42.99s, thereby qualifying Nigeria directly for the Rio 2016 Olympics in their event, by virtue of being among the Top 8 teams.

Nigeria’s 4x400m women at the Bahamas 2015 World Relays were a much changed quartet from the Bronze medal winning team the previous year – Rita Ossai, Patience Okon George, Ibukun Mayungbe and Ngozi Onwumere – finished 4th in Heat 1 in a time of 3:32.16, and later did not return the next day to compete in the B Final due to injury to one of them. This post-race interview features Mayungbe and Onwumere only.

Nigeria’s 4x400m men at the Bahamas 2015 World Relays, comprising Orukpe Erayokan, Robert Simmons, Chris Morton and Miles Ukoama finished 7th in Heat 2 in 3:06.92s at the events. This is the post-race interview with Simmons and Erayokan, who had plenty to say about the lack of support for Athletes in Nigeria!

Nigeria’s 4x200m men after the finals of their race at the Bahamas 2015 World Relays. The quartet of Divine Oduduru, Nicolas Imhoaperamhe, Orukpe Erayokan and Robert Simmons ran what would have been an National Record (NR) of 1:22.46s but were disqualified for an infraction after initially placing 4th in their heat! 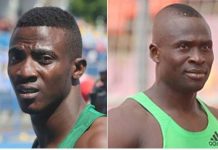 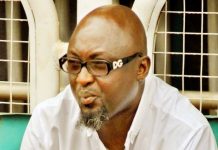 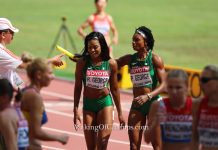