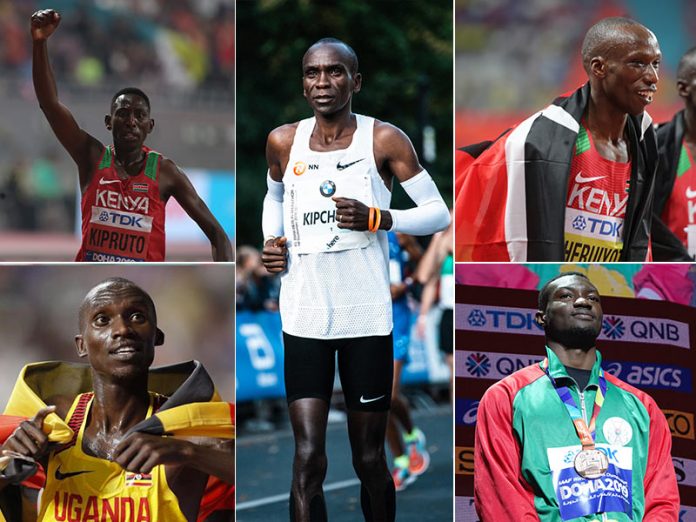 A few days ago, we released the first part of the series – ‘Top 10 African Male Athletes in 2019’. With attention paid to every little detail in 2019, the selections were made and scrutinized before the Top 10 list took shape.

We do hope that you, our readers enjoy the concluding part of the series and also leave your comments as to whether or not you agree with our rankings.

Some champions always find a way to come through, even at some very low points in their careers, and after seeing Conseslus Kipruto’s exploits in 2019, you have to agree he falls into this category. When most athletes in April were gearing up for the outdoor season, he was nursing a nagging injury to his foot.

As the defending World Champion, he of course had a bye to the Worlds, so he was at least assured of a spot to compete in Doha. When he did get back to competitive racing in August, he placed 5th at the Meeting de Paris in 8:13.75. Two days later, he ran at the African Games in Rabat but was a shadow of himself and Did Not Finish (DNF) the final of the 3000m Steeplechase.

Clearly still not at his best, he managed 7th place at the Brussels Diamond League final, finishing the race in 8:14.53. Kipruto had 28 days to get some things right, and after winning his heat at the World Championships, he needed to keep up the Kenyan dominance of the event.

Very much into the latter stages of the race, Lamecha Girma made a huge decision to go into the lead, leading a pack of very experienced runners, with Kipruto and Soufiane El Bakkali marking him closely. The event climaxed excitingly in the last 100m where Kipruto made a highly spirited move; he left it all on the track and gave it his all in that final push.

He and Lamecha Girma hit the finish together, at least to the human eye, and for a moment, everyone waited with bated breath for the results to be announced. The name Kipruto flashed up first on the big screen; the Kenyan had upheld their tradition, coming through for the win in 8:01.35, a time that surpassed Girma’s by 0.01s.

As it turned out, the dramatic Conseslus Kipruto hadn’t lost his touch as he celebrated defending his World title with the fastest time in the world in 2019.

It is quite interesting that a Ph.D student, Hugues Fabrice Zango combines Track and Field with studying, and competes at the highest level of his sport.

Zango is currently being trained by the World Indoor Record holder in his field, Teddy Tamgho. His outdoor season got off on a rather slow note but he soon picked up the pace at his third competition – Meeting Elite, Forbach, reaching 17.22m. He placed 4th at the Rome and Monaco Diamond League meets and managed 16.88m at his next meet in London.

He qualified for the final of the Triple Jump at the French National Championships with a 16.31m leap and then hit it big again, jumping a massive 17.50m to finish on top of the cart. He leapt 16.88m to win GOLD at the African Games in Rabat and was a DNS at the Brussels Diamond League final.

Having qualified for the final of the men’s Triple Jump at the World Athletics Championships with a modest 17.17m leap, it was almost clear that the contest for GOLD was between the two Americans. The fight for the Bronze medal ensued between Pedro Pablo Pichardo and Zango.

Pichardo reached solid fourth and fifth round attempts of 17.62m and 17.60m respectively while Zango pulled a 17.56m jump to bridge the gap between the two. One would have wondered what went on in the Burkinabe’s head as he took to the runway for his final hop, step and jump in Doha. He knew it was a big jump after landing but the important question was if it was big enough to get him into the medal zone.

As it turned out, he had infact broken his Personal Best (PB) and African Record (AR) with an impressive 17.66m. As Pichardo completed his final attempt, Zango knew he had made history by becoming the first Burkina Faso athlete to win a medal at the World Athletics Championships.

Ugandan distance runner Joshua Cheptegei finished 2019 as one of the best athletes in Africa and the world at large. He started off on a very good note when he secured his first senior world title at the IAAF World Cross Country Championships in Aarhus, Denmark – a big size up on his performance when he competed at home in Kampala two years before. Holding a sizeable 25m lead, he completed the Aarhus 10.24km course in 31:40.

His first race on the track was at the Shanghai Diamond League where he competed in the 5000m, finishing the race in 13:06.68 in 7th place. After placing 2nd in the men’s 3000m race at the Oslo Diamond League, he earned his first win at the Prefontaine Classic in the men’s two-mile race which he finished in 8:07.54.

Cheptegei ran a fabulous race in the men’s 5000m final at the Brussels Diamond League, taking the initiative for the lead and never relinquishing it. This tactic paid off just well as he came through for the win, breaking his Personal Best (PB) by over two seconds and returning a time of 12:57.41.

Despite winning the 5000m at the Diamond League final, he opted for the 10000m at the World Championships in Doha.

He shared the pace with young Kenyan Rhonex Kipruto, held on strongly and then went out on a give-it-all final lap with Yomif Kejelcha of Ethiopia. The Ethiopian was on a rampage, thinning out his lead, even as they both came off the final bend side by side. Kejelcha seemed to have something left in his reservoir but Cheptegei produced the extra kick, the kind that separates 1st and 2nd place finishers at big championships.

He capped off the season with a PB of 26:48.37, the second fastest time in the event’s history at the World Athletics Championships. It was also an improvement for him on the World Championships stage after he won Silver two years ago in London.

Kenyan middle-distance expert, Timothy Cheruiyot’s report card in 2019 suggests strongly that he is one of the finest runners in the world.

His versatility and strength especially in his specialty, the 1500m, was so strong that he only lost one race over the distance in 2019. That race was the Doha Diamond League meet at the Khalifa Stadium where he was timed 3:32.47 behind Elijah Manangoi who won in 3:32.21.

Every other race was his to lose and he demonstrated that at the Lausanne Diamond League where he won the men’s 1500m in 3:28.77, a time no other athlete could challenge for the rest of the season except himself. He again proved his worth by breaking 3:30 at the Monaco Diamond League before winning his third Diamond League trophy in Brussels with a time of 3:30.22.

The Kenyan National Championships came rather late into the season but Cheruiyot took on a bigger challenge when he opted to go for the 800m/1500m double. He had done an 800m Personal Best (PB) of 1:44.60 at the Kenyan Prisons Championships in July and after running 1:45.88 in the semis, he produced a brilliant run, shaving over a second off his PB as he clocked a new time of 1:43.11 to emerge national champion over the distance. The 1500m was a cakewalk for him as he easily topped the finals in 3:34.91.

Cheruiyot changed tactics, going out hard from the start. He was on a pace no one else could manage and by so doing, opened up a huge gap on the rest of the competitors.
As he hit the bell for the final lap, it somewhat looked like he had led himself on to a slaughter, having done so well all season, but he infact controlled the finishing so well and crossed the line in 3:29.26, the 2nd fastest time in the world in 2019 to win his first world title!

Kenya’s Eliud Kipchoge can almost be described as a once in a lifetime kind of athlete! He’s been in the game of Track and Field on the global stage since 2002 and was so good when he still ran in lanes, having won a world title in the 5000m and two Olympic medals over the same distance.

When he finally switched to the marathon, he emerged the 2016 Olympic Champion in 2:08:44. He shattered the World Marathon Record in 2018 when he clocked 2:01:39 in Berlin and was named the IAAF Male Athlete of the year.

The Kenyan had first attempted to break the 2-hour barrier in 2017 where he clocked 2:00:25, a time that wasn’t recognized as a World Record (WR) due to illegal aid in the race that held in Milan.

On the 65th anniversary of the 4-minute mile, it was announced that he would again attempt to break the barrier in Vienna, Austria. It was tagged the INEOS 1:59 challenge, sponsored by INEOS, a privately owned UK multinational chemicals company. This event held on 12 October, and again with Kipchoge as the focus, 41 pacemakers were to help in this attempt.

The 41 pacemakers rotated twice in each lap and the 5km splits spoke well of the job they did. The first two 5km were both completed in even splits of 14:10 and every other 5km completed was just 2-4 seconds slower.

With an average 5km of 14:10.8, Eliud Kipchoge made history, becoming the first man in the history of the men’s marathon to complete the 26.2 miles under two hours. He finished with an official time of 1:59:40.2, headlining the event with the tag “no human is limited”.

However, the time did not count as an official WR as a result of the rotating pacemakers and most importantly, the lack of open competition.