It’s that time of the year where we bring out our scorecards and rate the performances of Nigerian athletes in their respective events during the course of the year.

In a year that saw athletes compete at the Africa U18 & U20 Championships in Abidjan, African Games in Morocco and the World Championships in Doha, some Nigerian athletes distinguished themselves in these competitions, notching up medals aplenty, especially on the African scene.

In this two-part series, we will chronicle the achievements of Nigerian male athletes as we  feature Nos. 10 to 6 in this article.

Coming off a very eventful 2018 season where he made his debut for Nigeria at the Commonwealth Games and the African Championships, Enoch Adegoke made huge strides in 2019, as he did not only add to his laurels, he also ended the season with new Personal Bests (PB) in the 100m and 200m.

Undoubtedly, Adegoke’s high point of the season came at the second edition of the Making of Champions Grand Prix in June when he stormed to a new Personal Best of 10.12s, a few ticks up on the 10.19s he ran at the 2018 Commonwealth Games.

Adegoke ended his season with a maiden appearance at the 2019 World Athletics Championships in Doha where he ran the first leg for Nigeria in the heats of the men’s 4x100m relay.

For an athlete, competing in the NCAA circuit can be a herculean task because of its packed-up schedule, but it gets all the more difficult when you are a senior on the cusp of graduating and you carry the weight of delivering on the big stage for your school in the NCAA Championships.

Dotun Ogundeji did not only help his school, University of California, Los Angeles, (UCLA) also reach the latter stages of the NCAA Division with his performances in the Shot Put and Discus, he went one better by winning a Silver for Nigeria in the Discus at the 2019 African Games in Rabat.

Ogundeji, now a graduate of UCLA, had a successful indoor season with his fine performances in the Shot Put where he finished inside the top three, with the exception of the NCAA Division 1 final in Birmingham.

Entering the outdoor season, Ogundeji who missed last year’s NCAA Championships, set a new PB in the Shot put after he reached 21.05m at the Rafer Johnson/Jackie Joyner-Kersee Invitational in April, a mark that would have defeated last year’s NCAA shot put champion, Georgia Denzel’s, by roughly 0.44m.

He followed that up with another good display at the Beach Invitational in California where he broke his own record in the Discus to set a new mark of 60.54m. The thrower went further to claim the spoils at the NCAA West Preliminary and narrowly missed out on a podium placing at the NCAA Outdoor Championships, taking 4th place in the Discus and 5th in the Shot put.

Representing Nigeria for the first time, Ogundeji announced himself to Africa with a class performance in the men’s Discus, as he reached a mark of 57.82m to win Silver for Nigeria in the event. He also placed 4th in the Shot-Put finals of the Games. 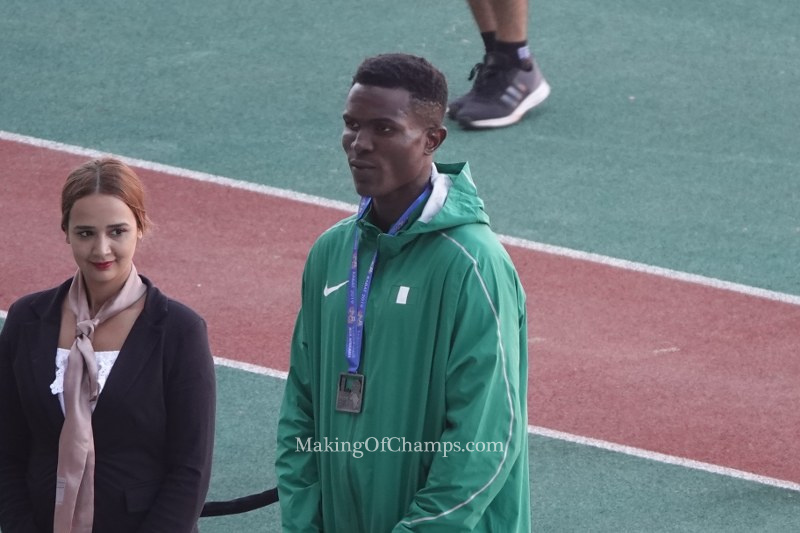 After dominating the local scene for the better part of the last two years in the men’s 110m Hurdles, 2019 was the year Abejoye Oyeniyi decided to broaden his horizon by taking on challenges outside the shores of Nigeria.

With the dearth of competitions quashing athletes’ preparations for major championships, Oyeniyi knew he had to compete habitually if he wanted to stand any chance of competing against the crème de la crème in his signature event.

He started his season stateside, competing at the Tiger Track Classic in Auburn, Alabama, where he finished 2nd in 13.93s. The African Championships Silver medallist went around the US as he competed in various relays, classics, and invitationals in Georgia, Los Angeles and Illinois.

The apogee of his season came at the Dwight Phillips Invitational Decatur, Illinois, a place where he clocked a new Lifetime Best of 13.67s to place 2nd behind Tray Holloway of US.

Although he lost his National Championships title to Martins Ogieriakhi, Oyeniyi was still able to clinch for himself a Silver medal at the African Games in Rabat, Morocco.

At the start of the year, we wrote an article about the Top 5 Nigerian Sprinters to watch out for in 2019, and Emmanuel Ojeli was one athlete that featured prominently in that list.

Before the 2019 season went into full swing, Ojeli bagged a scholarship deal with Shell Nigeria Exploration and Production Company (SNEPCo) in February, a development that propelled him to do great things on the track in 2019.

Ojeli showed us a glimpse of what to expect this season as he blitzed to a new PB of 10.62s in his first ever official 100m race while competing at the Athletics Federation of Nigeria (AFN) All-Comers meet in Ijebu-Ode.

What was to come next for the quarter-miler was special. Competing in his first international meet at the Gaborone International Meet, Botswana, Ojeli clipped more than a second from his previous PB of 46.98s set at the 2018 National Sports Festival, clocking a new one of 45.91s to take victory in the 400m B final.

Ojeli took that form to the 2nd edition of the Making of Champions (MoC) Grand Prix. Although ranked as Nigeria’s No. 1 in the event in 2019, Ojeli went into the meet competing against more established sprinters. He was however unruffled, as he went on to retain his title in 46.25s.

Ten days after, Ojeli maintained his unbeaten streak on home soil as he claimed the spoils at the African Games trials in 46.16s. The youngster was metaphorically flying at this point of the season.

At the National Championships in Kaduna, Ojeli lived up to his billing as the tournament favourite as he raced to the second-fastest time of his career, winning the men’s 400m title with a time of 45.93s.

Ojeli ended the season with a Bronze medal to add to burgeoning laurels, as he helped Nigeria’s 4x400m team place 3rd at the 2019 African Games. He also finished 6th in the final of the men’s 400m in 46.05s.

Taking the No.6 spot on our rankings is Chidi Okezie! The quarter-miler has undoubtedly been the most consistent 400m runner for Nigeria in the last three years.

From his first outdoor debut for Nigeria at the African Championships in Durban 2016 where he won Bronze, to getting the same color of medal in Asaba a year ago, Okezie has mastered the art of living up to expectation at the biggest stage on the African soil in an event the has seen the likes of South Africa, Botswana and more recently, Kenya dominate.

Like his previous seasons, Okezie didn’t start this year like a house on fire as he churned in modest displays at some meets in the early part of this year.

He, however, began to show flashes of things to come later in the season when in July, he clocked 45.94s to win the Potomac Valley High-Performance Track and Field Championships in Maryland.

That performance served as a springboard for him heading into his maiden appearance at the African Games. At the Games, Okezie claimed victory in his heat of the men’s 400m in 46.65s, before going on to place second in his semis, clocking 46.20s.

Despite not being in medal contention after the first 300m in the final, Okezie found a late burst of energy in the home straight, as he was able to snag a Bronze medal for himself, racing to a new Personal Best (PB) of 45.61s, the fastest time by a Nigerian quartermiler in 2019.

He then anchored the Nigerian 4x400m team comprising Emmanuel Ojeli, Samson Nathaniel and Shedrach Akpeki to Bronze in a time of 3:04.33.

Watch Chidi Okezie speak to Making of Champions about wanting Nigerian quartermilers to dominate the continent.