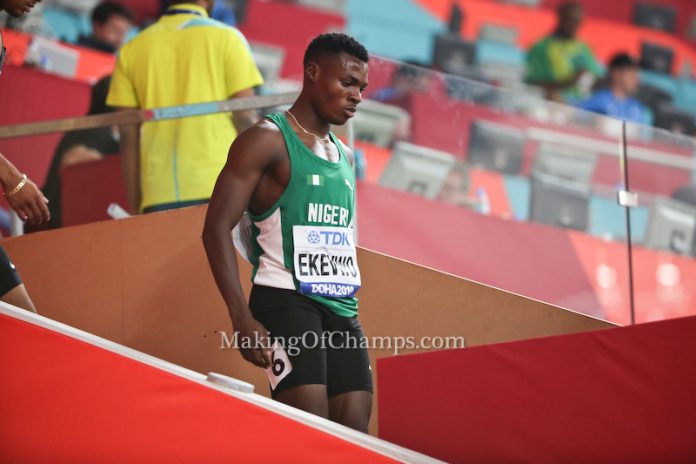 Team Nigeria’s quest to win a first World Athletics Championship medal since 2013 continues as one of the countries brightest prospect, Raymond Ekevwo, didn’t make it into the final of the men’s 100m, a race that was eventually won by Christian Coleman.

The sprinter held his own until the 40m mark as the established order were just a nose ahead of him.However, when Gatlin, De Grasse and Blake got past the halfway mark, they peeled away from the Nigerian, with De Grasse snagging the win in 10.07s. Ekevwo placed 5th with a 10.20 clocking.

Elsewhere, Rilwan Alowonle was running a good race in his semis of the men’s 400m Hurdle till he hit a barrier, as he settled for 8th in 52.01s. Rai Benjamin blasted to a slick 48.52s to take the heat.

National Record holder in the 800m Edose Ibadin couldn’t scale past his Heats after he finished 6th in his Heats with a time of 1:47.91s.