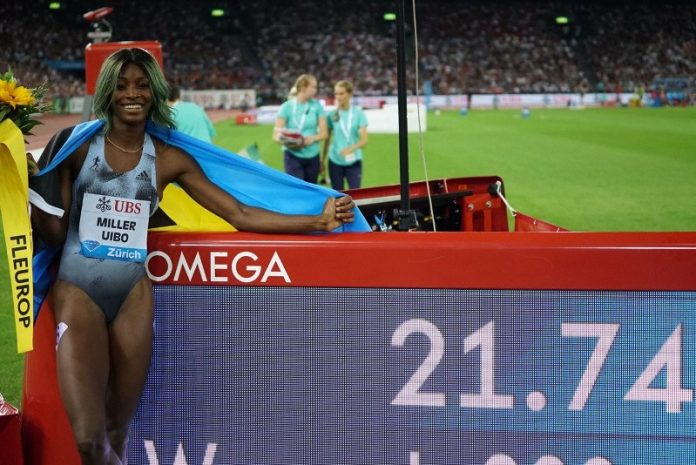 Sizzling performances from Shaunae Miller-Uibo and Karsten Warholm were the major highlights in the first of the two Diamond League finals on Thursday night at the Weltklasse in Zurich, as both athletes scorched to new Diamond League Record (DLR), World Lead (WL), National Record (NR) and Personal Best (PB) times to win the Diamond Trophy in their respective events.

In the women’s 200m final,  Shaunae Miller-Uibo, the Diamond Trophy holder was on fire from the outset en route to a sensational 21.74 performance in the 200m. It is the fastest time recorded this year and the fastest in four years. The win also means the Bahamian collects her fourth Diamond Trophy – her second in the half lap distance.

Dina Asher-Smith looked in position to challenge off the bend, but Miller-Uibo was unstoppable once she opened up those long legs and showed the turnover that won her the Olympic 400m title in 2016. She moved away from Asher-Smith with a terrific and definitive burst and the gap only grew as she went powered through the line.

For Karsten Warholm, he blitzed to a world-leading time to win the men’s 400m hurdles.
Warholm, the world champion and world leader in the event, went out like a rocket as he always does, establishing a clear lead over Rai Benjamin at halfway.

Benjamin then stepped on the gas, and as he came off the second bend he was almost level with the Norwegian. Warholm then labored over the penultimate hurdle, stuttering and opening the door for Benjamin.

But just as the American was about to take advantage, Warholm regained his form over the final barrier and pulled away to win in 46.92. Benjamin settled for second in 46.98s.

In the men’s 100m, Noah Lyles didn’t have the best of start as is always the case in the shorter sprint, but once he got into the final third of the race, there was no looking back, as he won in 9.98s. Second place went to Xie Zhenue in 10.04, while Yohan Blake was 3rd in 10.08.

One major upset on the night came in the women’s 400m Hurdles. Sydney McLaughlin became the youngest champion in the event in DL history, after pulling away from Dalilah Muhammad and Shamier Little off the final three barriers to win in 52.85.

Little, fourth at the US champs last month,came home in second ahead of Muhammad in third.

In the women’s 400m, Salwar Eid Naser successfully defended her title, winning in 50.24. Shakima Wimbley (51.21) came through for second while third went to Lisanne de Witte, who clocked an SB of 51.30.

Donavan Brazier won the 800m in a Personal Best of 1:42.70, after reeling in Nijel Amos in the home straight of the race.By virtue of the win, he became the first American in history to win the men’s 800m DL title.

After leading the opening laps of the women’s 1500m, Genzebe Dibaba couldn’t handle the kick of Sifan Hassan on the last last, with the Dutch runner winning in 3:57.08.

It was a keenly contested affair between Jamaica’s Shanieka Ricketts and World Champion Yulimar Rojas in the women’s Triple Jump. In the end, Ricketts won with her last jump of the competition, a 14.93m PB.

Chinese thrower Gong Lijiao recorded a throw of 20.31m to set an MR on her way to winning the shot put in the final round. Chase Eealey was second with a throw of

In the men’s Pole vault, Sam Kendricks had to clear 5.93m to win, with Mondo Duplantis not being able to scale that height.

Juan Miguel Echevarria’s opening long jump of 8.65m was enough for him to win his first Diamond League Trophy . He didn’t register another legal mark for the remainder of the competition. Behind him, Ruswahl Samaai and Tajay Gayle both produced bests of 8.20m, with the South African Samaii claiming second with a superior second best jump.