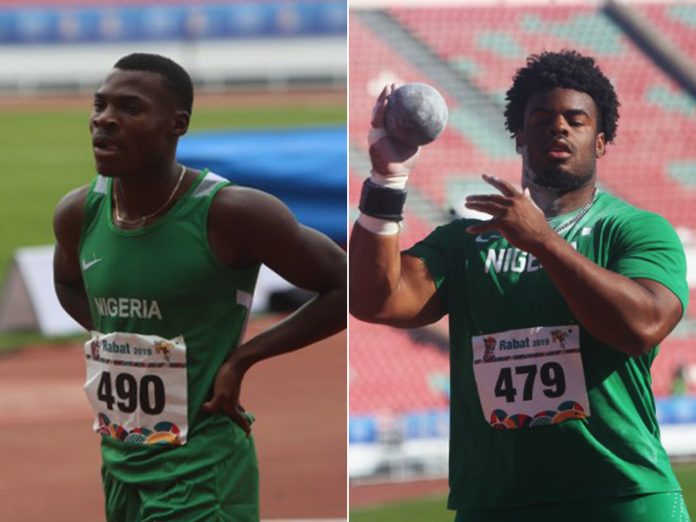 Team Nigeria moved ended Day 12 fourth on the medals table at the ongoing African Games after it racked up 16 medals (10 GOLD, 2 Silver and 4 Bronze) at the end of the day, taking its total haul to 49 medals.

Raymond Ekevwo became the first Nigerian to win the men’s 100m at the African Games since Olusoji Fasuba achieved the feat at the 2007 Games which was held in Algiers.

Ekevwo, who won his Heats and semis yesterday in comfortable fashion rose to the occasion on the day, beating Ivory Coast’s Arthur Cisse to the win in a time of 9.96s. Cisse was one hundredth of a second behind for 2nd, while National Champion Usheoritse Itsekiri was 3rd in 10.03s.

In the women’s final, Joy Udo-Gabriel narrowly missed out on a podium finish as she placed 4th in 11.44s. Ivory Coast’s Marie Josee Ta Lou defended her title with relative ease, clocking 11.09 for the win.

Abejoye Oyeniyi, the African Championships Silver medalist in the men’s 110m hurdles, gave a good account of himself in the final of the event as he came back from a slow start to clinch Silver in 13.90. Amine Bouanani of Algeria won GOLD with 13.60s.

Less than a month after he broke the National record in the Shot Put, Chukwuebuka Enekwechi erased Frank Elemba’s African Games record of 20.25m to set a new one of 21.48m, a mark which won him GOLD in the men’s Shot Put final. Dotun Ogundeji finished outside the podium as his 20.04m throw placed him in 4th.

Temilola Ogunrinde settled for Silver in the women’s Hammer Throw Final after she reached a distance of 64.56m, while her compatriot Adetola Olatoye took Bronze with a best throw of 63.97m. Queen Obisesan was 5th with 61.82m.

In the women’s High Jump, Esther Isah and Doreen Amata could only scale a height of 1.78m, as both athletes placed 4th and 5th.

African Champion in the women’s 100m Hurdles Tobi Amusan barely broke a sweat on her way to clocking 12.69s to qualify for the final. Kemi Francis placed 4th in the same Heat. Grace Anigbata was 4th in Heat 2.

Nigeria had two qualifiers from the men’s 400m semis. Emmanuel Ojeli came through Heat 1 of the semis unscathed, placing 2nd with a time of 46.21s, while Chidi Okezie ran 46.20s to finish 2nd in Heat 2 of the semis. Orukpe Eraiyokan did not start his race.

In the women’s category, Patience Okon-George (51.96) placed 2nd in the first semis, while Favour Ofili (51.94) won the second semis. They both qualified for the finals.

The men also qualified for the finals of the 4x100m in comfortable fashion, as the quartet of Divine Oduduru, Emmanuel Arowolo, Ogho-Oghene Egwero and Seye Ogunlewe combined to win Heat 1 in 39.15s.

It was a clean sweep of medals for Nigeria in weightlifting for women. Rafiatu Lawal won the women’s 59kg (210kg), Clean-Jerk (117kg) and Snatch (93kg) to claim three GOLD medals for herself.

Nigeria’s men football team qualified for the finals of the event after they defeated Mali 5-4 on penalties. Regulation time ended in parity. The team will now play Burkina Faso in the finals on Friday.