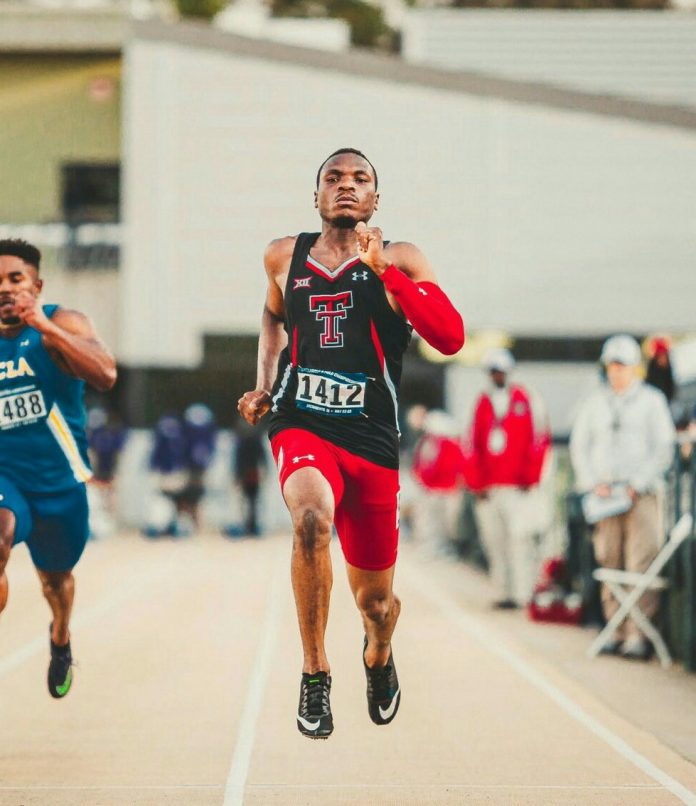 The NCAA East and West Preliminaries that took place in Jacksonville and Sacramento respectively, produced a mixture of great performances, disappointing shows and a few narrow misses.

Six Nigerian athletes qualified for the NCAA Championships coming up from June 5th to 8th at the Mike A Myers Stadium in Austin, Texas, with Divine Oduduru topping the list as he seemed to have been timing his big run for the big stage, going by the ease with which he won all of his heats.

It was the 100m he did first, clocking 10.17s in the first round to go through to the quarterfinals where he further improved to 10.06s, which had him lead a 1-2 finish for Texas Tech as his teammate, Andrew Hudson, finished 2nd in 10.22s

Oduduru, the World Leader in the 200m, ran a slightly wind-aided 19.95s to make the quarterfinals and then won his quarterfinal heat in 20.08s, going through as the second fastest man in qualification, just behind Andrew Hudson who dropped a Personal Best (PB) of 20.04s in another heat.

Bashiru Abdullahi competed in the men’s 110m Hurdles and in a hard fought second quarterfinal heat, he came through to take the final fastest loser spot in 13.94s while the heat was taken by Cordell Tinch in 13.70s. The CSUN freshman had gone faster with 13.87s in the first round and will be happy with the progress he has made since getting to the US.

Raymond Ekevwo found himself in a tight 100m quarterfinal heat at the East Preliminaries as after running 10.29s to win in the first round, he couldn’t quite replicate the winning aspect, finishing 4th in 10.25s. His was a case of a narrow miss as he placed 14th overall, just outside outside the Top12 spot that would have qualified him for the NCAA Championships.

Ekevwo also ran the 200m where he finished 6th in his heat with a time of 20.84s. He’ll however take consolation in the fact that he set a new PB, taking down his previous mark by eight-hundredths of a second. Haisha Bisiolu clocked 23.69s in her heat of the women’s 200m which wasn’t enough to take her into the quarterfinals.

Madeleine Akobundu made it through in the women’s 100m Hurdles at the East Preliminaries where she ran 13.17s to finish 3rd in her heat and 8th overall. Akobundu had run 12.97s to win her heat in the first round.

Abike Egbeniyi finished third in her 800m quarterfinal and will be competing at the NCAA Championships after her Silver medal-winning feat in 2018. Danae Rivers led her heat in 2:03.58 while Jennifer Edobi who had done as much as a PB in the first round, managed 7th in her own 800m heat in 2:06.46.

Virginia’s Ogheneakpobo Efekoro had to dig deep to qualify for the NCAA Championships in the men’s Shot Put as he pulled 18.77m right on his final throw, the fourth to finish 10th overall while Isaac Odugbesan reached a Season’s Best (SB) of 18.48m but didn’t make it through as the 16th man in the final rankings.

Mercy Abire competed for LSU in the women’s Long Jump where she leapt 6.04m to finish 14th overall, while she jumped 12.40m in the Triple Jump.

Perhaps, the narrowest of those of misses must have been Kelechi Nwanaga’s 49.49m throw in the women’s Javelin Throw. She missed a spot to the NCAA Championships by a scanty cm as Danielle Konospelki of Wake Forest took that ‘golden’ spot as the 12th best in the field with 49.50m.

Aniekeme Etim was also in action at her first NAIA Championships after her switch to William Carey University. After running 11.27s, aided by a 2.4m/s wind in the preliminary stages of the 100m, she turned in an SB of 11.36s to win the final and then extended her dominance to the 200m which she won in 23.59s.

Aminat Olowora of the Oklahoma City University competed in her final NAIA Championships and in usual style, she absolutely ruled affairs in the women’s 10000m, running away from the field to eventually prevail with a lead of over 2 minutes. The winning time was 34:14.39 while Emily Kearney came home in 2nd in 36:40.72.