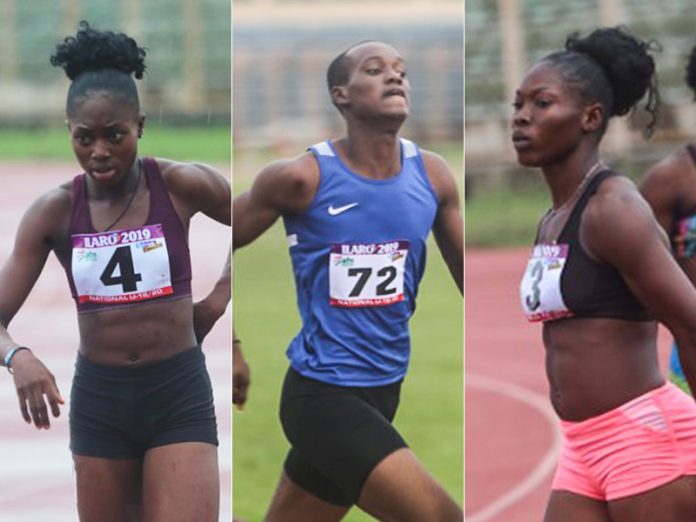 The trio of Favour Ofili, Grace Nwokocha and Obashola Olaoluwa produced commanding performances to clinch their respective sprint titles on Day 2 of the National U-18 and U-20 Trials taking place at the Gateway Stadium in Ilaro, Ogun State.

In the U-20 women’s 100m final, Nwokocha upset the apple cart to beat tournament favourite Rosemary Chukwuma as she held off a late surge by the latter to claim victory in 11.79s. Chukwuma settled for 2nd in 11.83s while Marvelous Asemota placed 3rd in 12.12s.

There was to be no stopping Enoch Adegoke in the men’s final as the Commonwealth Games finalist was way ahead of the chasing pack, clocking 10.39s to take the win. Alaba Akintola was a distant 2nd in the race, finishing with a time of 10.78s, while Shedrack Akpeki placed 3rd in 10.83s.

For the Boys’ final, Godson Brume turned on the style in emphatic manned as he was able to withstand pressure from Nicholas Fakorede and Iruoghene Okoro in the first half of the race to emerge victorious in 10.79s. Fakorede placed 2nd, while Okoro was 3rd in the race. Oluwateniolafunmi Fadahunsi won the Girls’ category in 12.30s.

However in the women’s 200m final, Chukwuma got her pound of flesh from Nwokocha as she crossed the finishing line ahead of her rival.

Meanwhile Ofili, who is the reigning African Youth Champion in the 400m, opted to compete in the half-lap event at the trials, with the move paying massive dividends for her.

Pounding the wet track after the rain had earlier come in its torrents, Ofili breezed past her opponents to breast the tape first in Final A of the Girls’ 200m with a 23.74s clocking. Anita Taviore was 2nd in 24.73s, while Fadahunsi placed 3rd in 25.15s.

Olaoluwa produced one of the notable performances of the day as the quatermiler led from gun-to-tape to take the win in the Boys’ 400m Final A in a lifetime best of 47.36s, while Adedoyin Fatola clinched the win in the Final B.

Nse Imaobong Uko continued her unbeaten streak at Youth level as she coasted to victory in Final A of the Girls’ 400m in 54.46s. Bright Ada won Final B in 59.34s.

Meanwhile, in the women’s final, Charity Agofure came from the inside lane to pip Making of Champions’ (MoC) Blessing Oladoye to win with a time of 56.58s. Oladoye placed 2nd in 56.72s.

Hannah Kemele proved her mettle in the Girls’ Hammer Throw final, claiming victory with a best mark of 44.45m, while Ezinne Okoro won the Junior category with a mark of 19.84m.

In the Girls’ Long Jump final, Ruth Agadama won with a best jump of 5.17m, while Destiny Udumabraye claimed victory in the men’s Triple Jump final with a best leap of 13.69m. Also, Esther Isa was the woman to beat in the women’s High Jump final, as she won with a leap of 1.75m.