Shauane Miller-Uibo maintained her winning streak in all her events this season, producing her trademark finish in the home straight to win a stacked women’s 200m field at the Birmingham Diamond League.

It was a victory that didn’t come easy for Miller-Uibo, but she would be delighted having come out victorious with a new Meeting Record (MR) of 22.15s. What’s more remarkable in that race is how the athletes changed leads with about four athletes in the frame to win it after the bend.

World Leader, Dina Asher-Smith was explosive off the blocks, then Dafne Schippers started leading off the bend, with Shericka Jackson also running well on the outside, but Miller-Uibo feeling that the race was slipping away, dug into her strides to go past all and secured the win.

In the men’s 800m, it was a total Kenyan dominance who finished in a 1-2-3-4 order. Having missed out on the African title two weeks, Emmanuel Korir put the disappointment behind him as he raced to victory today in a new MR of 1:42.79s. That time is the third fastest in the world this season, with Korir also accounting for the WL of 1:42.14

Jonathan Kitilit ran very well, but Korir closed the gap, going past him in the last 80m to secure the win. Kitilit was 2nd in 1:43.53, with Elijah Manangoi finishing 3rd with a new Personal Best of 1:44.15.

The men’s 100m was a fitting finale to the meet, as it took some minutes after the race to ascertain who won the race. Christian Coleman who led for 80m was almost assured of the victory, but Reece Prescod ensured that he had to wait for official confirmation, dipping in at the same time.

Both athletes clocked an identical 9.94s, but it was Coleman who got the nod, with Prescod having to settle for 2nd place. Although he didn’t get the win, but Prescod would makedo with the new Personal Best. Noah Lyles finished 2nd in that race with a time of 9.98s

In the men’s 400m, there was a big cluster as the athletes ran into the home straight. Christain Taylor ran so well, but didn’t have the legs to finish up, as Fred Kerley came through the sea of bodies to win in 45.54s. Hudson-Smith was 2nd in 45.59s & Paul Dedewo 3rd in 45.62s

Although Orlando Ortega wasn’t so fast off the blocks, he covered up after the third barrier to come through and win the men’s 110m Hurdles with a Season’s Best of 13.08s. Ronald Levy was 2nd in 13.22s and Pascal Martinot-Largarde 3rd in 13.27s

In the absence of Soufiane El Bakkali in the men’s 3000m Steeplechase, there was hardly any challenge for Conseslus Kipruto who went on to win the race with a time of 8:14.33

The two Long Jump events produced Meeting Records in both categories. After fouling in her second attempt, newly crowned European champion Malaika Mihambo improved afterwards to win with an MR of 6.96m.

Caterine Ibarguen had led after the first three jumps, but the German left it late to take the initiative from the Triple Jumper to take the win. Ibarguen finished 2nd with 6.80m and Shara Proctor 3rd with a mark of 6.70m.

Although not a Diamond League even, South Africa’s Luvo Manyonga was back to winning ways, jumping an MR of 8.53m to take the win.

Sandi Morris won the women’s Pole Vault, being the only one to scale 4.62m before failing all three attempts at 4.72m. Katerina Stefanidi finished 2nd having failed her first attempt at 4.62m and failing two attempts at 4.72m.

While in the men’s Javelin, it was a German 1-2, but it didn’t feature Thomas Rohler. Andreas Hofman won with a mark of 89.82m ahead of his compatriot Julian Weber who was 2nd throwing a distance of 86.63m. Kirt Magnus finished 3rd with 85.31m, while Rohler finished a distant 4th with 84.33m 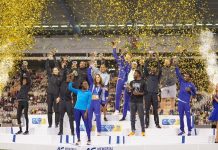 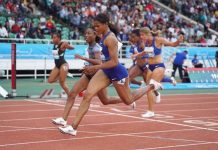 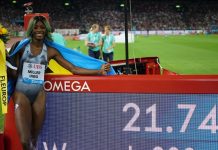