Home Athletics AFN announces U18 & U20 Trials in Ozoro, 8th to 9th June

The National Trials for Youth and Junior athletes hoping to represent Nigeria internationally this year has been scheduled to hold on June 8th and 9th, according to the updated calendar released by the Athletics Federation of Nigeria (AFN) on Monday.

The National U-18 and U-20 Championships wasn’t captured in the previous calendar released earlier in the season, but will now hold in Ozoro, Delta State, and will be used to select athletes that will compete at the IAAF World U-20 Championships holding in Tampere, Finland, from July 10th to 15th, the African Youth Games slated to take place in Algeria from July 19th to 28th, and Youth Olympic Games being hosted by Argentina from October 6th to 18th.

Meanwhile the highly anticipated 4th leg of the AFN Golden League will now take place on Friday and Saturday, May 25th and 26th, also in Ozoro.

There had been indications that the event would hold in Abuja, but all roads will now lead to Delta State, seeing that the competition is the first meet on the domestic front since last month’s Commonwealth Games in Gold Coast, Australia.

Also, the 5th and final leg of the Golden League will hold in Uyo, Akwa Ibom State, on 22nd and 23rd of June.

The All Nigeria Track and Field Championships is slated to take centre stage from July 8th to 12th in Asaba, just before the IAAF World U-20 Championships. Here is the updated calendar. 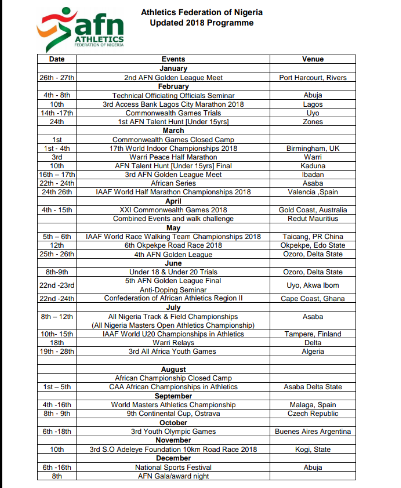