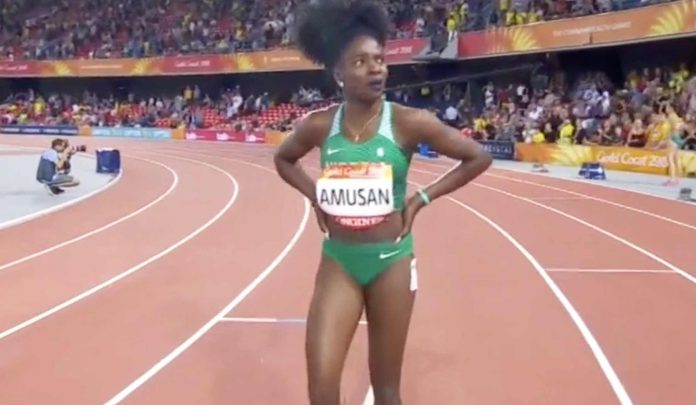 Tobi Amusan’s long wait for a global title finally came to an end on Friday at the ongoing Commonwealth Games in Australia where she upstaged 2015 World Champion Danielle Williams, to win the women’s 100m Hurdles with a Season’s Best of 12.68s.

It was a historic moment for Nigeria as Amusan’s feat makes her the first ever Nigerian athlete to win a GOLD medal in the event. Also, her winning time is just 0.03s off the Games Record (GR) of 12.65s set by Jamaica’s Brigitte Foster-Hylton at the 2006 edition of the Games in Melbourne.

It was a dream come true for the 2015 African Games Champion who finished 5th at the 2016 World Juniors in Poland, got to the semis of the 2017 World Championships in London, and finished 7th in the 60m Hurdles at last month’s World Indoor Championships in Birmingham.

We had tipped Amusan as one of the athletes to watch out for at the Commonwealth Games, and in the absence of World Champion Sally Pearson, had predicted that the women’s 100m Hurdles final would be a head-to-head race between Amusan and Williams.

The Jamaican ended up in 2nd place in a time of 12.78s as her teammate Yanique Thompson took the Bronze in 12.97s.

Meanwhile teammate Stephen Mozia who competed in the men’s Discus final placed 7th with his best throw of 59.58m. It was a Jamaican 1-2 in the event as Fedrick Dacres set a GR of 68.20m as teammate Traves Smikle took the Silver in 63.98m.