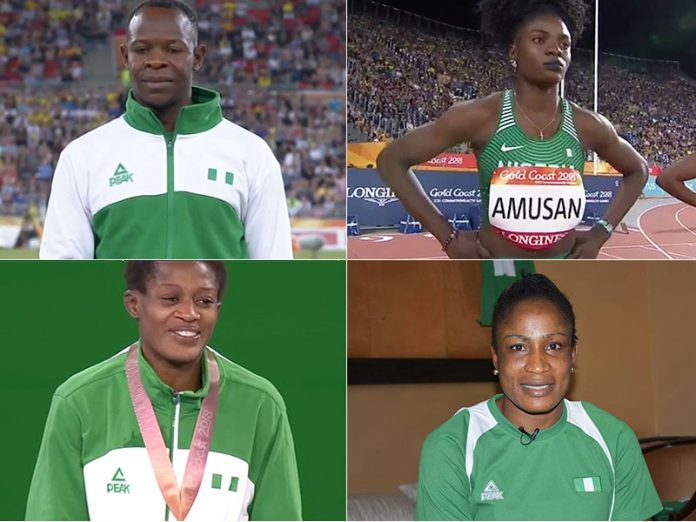 Team Nigeria increased her medal tally to eighteen on Day 9 of the Commonwealth Games taking place in Australia, with the Athletics, Wrestling and Boxing events responsible for bringing in four GOLD and three Bronze medals.

Tobi Amusan finally won her first individual global GOLD medal for Nigeria as she brushed aside the challenge from Jamaica’s Danielle Williams to win the women’s 100m Hurdles in a time of 12.68s. Williams clocked a time of 12.78s to finish 2nd, with Yanique Thompson, also of Jamaica placing 3rd in a time of 12.97s.

Another athlete who clinched GOLD for Nigeria was Para-athlete, Suwaibidu Galadima. The special athlete who competed in the Men’s T47 100m final, gave the race his all as he took the win in a time of 11.04s.

Still in Athletics, the Nigerian male relay teams suffered mixed fortunes on the day as the 4x100m squad made it into the final while the 4x400m quartet were disqualified due to a lane infringement.

The 4x100m team which comprised of Enoch Adegoke, Usheoritse Itsekiri, Ogho-Oghene Egwero and Seye Ogunlewe, ran a Season’s Best (SB) of 38.52s to finish 3rd behind England and Jamaica, thereby qualifying for the final.

It was a bad day in the office for the 4x400m quartet of Orukpe Erayokan, Samson Nathaniel, Isah Salihu and Chidi Okezie, as the team was eventually disqualified after they had originally finished 2nd behind Botswana in Heat 1.

On the Field, Stephen Mozia finished 7th in the final of the men’s Discus with a throw of 59.58m. Jamaica’s Fedrick Dacres won the GOLD medal with a Games Record of 68.20m.

Furthermore, Samuel Kure placed 8th in the men’s Javelin qualification Group A with his best throw mark of 73.49m, which is also a new Personal Best (PB) for him. However, Kure would not compete in the final after ranking 15th overall on the standings.

With the Wrestling team accounting for a Silver and two Bronze medals on Day 8, Odunayo Adekuroye became the first wrestler to win a GOLD medal after she defeated India’s Pooja Dhanda (7-5) in the final of the Women’s Freestyle 57kg category.

Blessing Oborududu followed suit as she also struck GOLD in the Women’s Freestyle 68kg category after making a comeback from a 3-0 deficit to defeat Canada’s Danielle Lappage 4-3 (Victory by Points). Also, Amas Daniel won a Bronze medal in the Men’s Freestyle 65kg.

Meanwhile, Team Nigeria also raked in two Bronze medals in Boxing. Regardless of losing  5-0 to Australia’s Caitlin Parker in one of the semis in the Women’s 75kg class , Millicent Agboegbulem still got a Bronze medal for her efforts, while Yetunde Odunuga took home the same color of medal after succumbing 4-1 (Win by Points) to England’s Paige Murney.