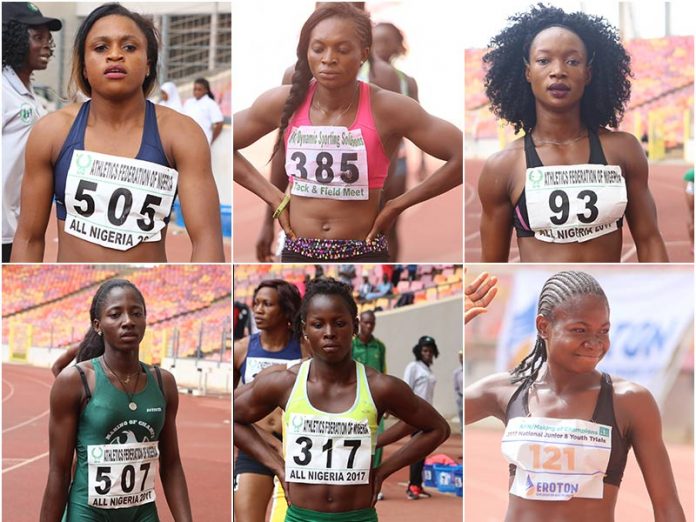 Earlier in the week we published a feature highlighting some of the Nigerian Male Sprinters to watch out for in 2018. Their female counterparts are not left out in our predictions, as a few of them are already demonstrating that they have so much to offer this season.

Here is our shortlist of the Top 6 Nigerian Female Sprinters to watch out for in 2018, going by their performances in the Athletics Federation of Nigeria (AFN) All-Comers in Abuja, Kaduna Golden League, Commonwealth Games Camping Trials and Collegiate Indoor meetings.

Occupying the 6th spot on our list is Kids and Play sprinter Rosemary Chukwuma who hit the limelight after winning the sprint double at the National U-18 Championships held in Abuja last year. She also won the 200m at the 2017 National Youth Games (NYG) in Ilorin to cap her impressive outing in the 2017 season.

Chukwuma was in action at the Athletics Federation of Nigeria (AFN) All-Comers staged in Abuja in November to herald the 2018 season. She clocked the overall fastest time of 11.96s in the heats before clocking a Personal Best (PB) of 11.85s to finish 2nd behind Maria Thompson in the final. 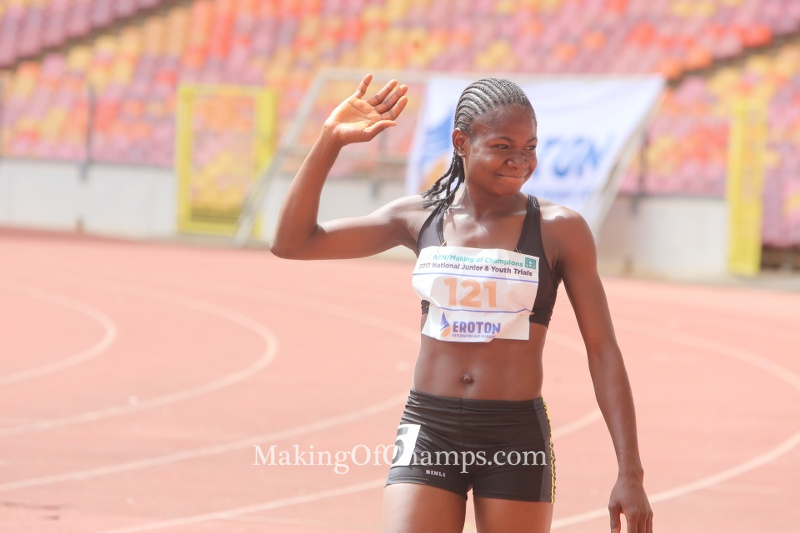 She stormed to another PB in the 200m, racing to a time of 24.41s in the heats, which was also the overall fastest time. A week later at the Kaduna Golden League, she clocked a wind-aided 11.71s to place 4th in the women’s 100m final.

She then lowered her PB to 11.74s at the Commonwealth Games Camping Trials a few days later. Her time is the 4th fastest clocked by a Nigerian female sprinter this season, and Chukwuma will be hoping to consolidate on these performances in 2018.

Blessing Ogundiran has only competed in one race this season, talking about the 100m heats of the Commonwealth Games Camping Trials held in Abuja in December 2017. However, her time of 11.54s, which she clocked to win her heat, is the 2nd fastest by a Nigerian female athlete this year. It is also a Personal Best (PB) for the Eaglesight sprinter.

Who knows, Ogundiran may have further lowered her PB in the final but an injury stopped her from competing in the race altogether. Nevertheless, we look forward to all the tricks Ogundiran has up her sleeves this season, considering her brilliant performance in 2017.

While competing at the AFN/MOC National U-20 Championships in June last year, Ogundiran won the Bronze medal in the 100m behind Aniekeme Alphonsus and Joy Udo-Gabriel.

The highlight of her season was at the All-Nigeria Championships where she held her own to qualify out of the heats after placing 3rd in the race which was won by Alphonsus, with Isoken Igbinosun following in 2nd.

However it was an entirely different ball game in the final as Ogundiran stunned her older counterparts to snatch the Silver medal with a then PB of 11.70s, with Alphonsus taking GOLD. She will definitely aim to spring more surprises this year, so watch out!

It was only a year ago that Making of Champions (MoC) athlete Ifunanya Muoghalu was struggling to make an impact in the shorter sprints, but going by the giant strides she has made this season, it is definitely evident that the quartermile is Muoghalu’s forte, and she is definitely one to watch out for in the 400m this year.

The University of Port Harcourt undergraduate raced to a Personal Best (PB) of 56.08s in her first 400m race of the season at the AFN All-Comers meet in Abuja, running from Lane 1 to finish 2nd behind Margaret Etim.

Her time of 54.50s is the fastest in the women’s 400m this season, and going into the second Golden League event holding in Port Harcourt next week, Muoghalu will be hoping to upset the applecart as she faces her more experienced counterparts in the event. From all indication, 2018 will be a defining moment in Muoghalu’s Athletics career.

Talented sprinter Maria Thompson Omokwe has been on a roll since emerging the women’s 200m National Champion, a feat she achieved last season.

Omokwe set the pace by winning her heat ahead of Aniekeme Alphonsus at the All-Nigeria Championships, racing to a time of 23.77s to qualify for the final, which she won with a time of 23.71s, to end her season on a high.

At the AFN All-Comers held in Abuja in November, she won her heat in 12.00s and then dominated the final in 11.80s to send a note of warning to her rivals. A week later in Kaduna, she came into the championship as the woman to beat but was upstaged by Isoken Igbinosun who took the race in a wind-aided 11.42s as Omokwe followed in 11.51s.

However, she bounced back a few days later at the Commonwealth Games Camping Trials in Abuja where she secured the victory in the 100m with a time of 11.67s, before making it a double as she stormed to a win in the 200m in 23.56s, putting her at the top of the national rankings in the event this season.

Her time in the 100m is also the third fastest by a Nigerian woman this season, and Omokwe is set to rekindle her rivalry with the likes of Igbinosun ahead of the second leg of the Golden League holding in Port Harcourt next week. Considering that she is ranked in the Top 3 nationally in both the 100m and 200m, Omokwe is certainly one athlete to keep tabs on this year.

Isoken Igbinosun is currently the fastest female athlete thus far in the season and is No.1 in the women’s 100m Toplist with her time of 11.48s clocked during the heats of the Kaduna Golden League in December 2017. She went on to win the final, but it was with a wind-aided time of 11.42s. As such, the NSCDC athlete tops the list for the fastest times for both legal and illegal wind readings.

This was the perfect way to lay down the gauntlet ahead of the 2018 season which will see Nigerian athletes jostling for spots on the team to the Commonwealth Games in Australia in April, as well as the African Championships holding in August in Asaba, Delta State.

Igbinosun also competed in the 200m in Kaduna where she ran the overall fastest time of 22.9s in Heat 1 while Omokwe clocked 23.3s in Heat 2. Incidentally, the Kaduna Golden League is Igbinosun’s only competition thus far but one doesn’t need a soothsayer to predict that she will be looking at dominating the domestic scene in 2018 after playing second fiddle last year.

Despite enjoying a good performance in the 100m heats at the 2017 All-Nigeria Championships, Igbinosun surprisingly lost out on a podium placing after being pipped to Bronze by Mercy Ntia-Obong, with Aniekeme Alphnsus and Blessing Ogundiran winning GOLD and Silver respectively.

She was luckier in the 200m where she settled for Silver behind Maria Thompson Omokwe. Igbinosun will be out to prove that she is the woman to beat when the Port Harcourt Golden League gets underway next week. We can’t wait to see what she’s up to!

Our No.1 female sprinter to watch out for this year is none other than Aniekeme Alphonsus who is currently plying her trade in the US, having secured a track scholarship to study at the Oral Roberts University (ORU) in Tulsa, Oklahoma.

Alphonsus had an amazing 2017 which saw her dominate the women’s 100m at both junior and senior level. She claimed the sprint double at the AFN/MoC National U-20 Championships, winning both titles ahead of MoC’s Joy Udo-Gabriel in times of 11.74s and 23.94s respectively.

As if that wasn’t enough, Alphonsus upstaged her older rivals to snatch the 100m title at the All-Nigeria Championships in a time of 11.52s. She tried to do same in the 200m but it was not to be as Maria Thompson Omokwe proved too strong. She eventually finished outside the medals zone, settling for 4th in 24.10s.

Having relocated to the US at the end of the 2017 Athletics season, Alphonsus kicked off her collegiate career with a bang as she smashed ORU’s Record in the 60m event at the at  Bob Timmons Challenge held at the University of Kansas. She finished 2nd with a Personal Best (PB) of 7.42s, clocking the same time as Aaliyah Birmingham who was awarded the race.

Having already won several laurels for Nigeria at Youth and Junior level, Alphonsus will be aiming for greater exploits in 2018.